Setting finite carbon budgets has proved a useful environmental policy tool at national level, but to date has failed to gain traction on an international scale. Are concerns over fairness and cost justified, or could it offer the global community its best chance for tackling climate change? 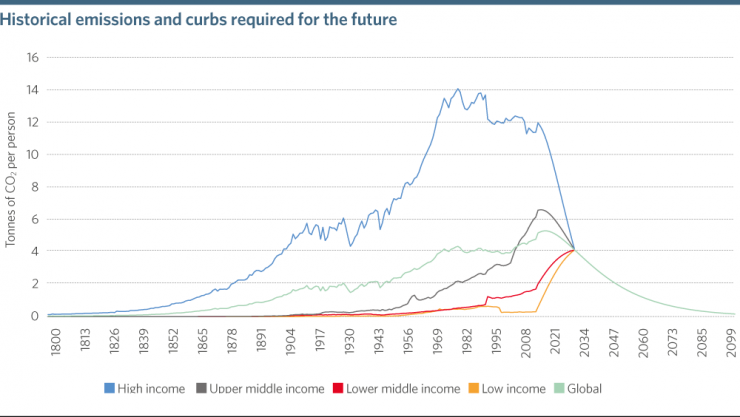 Setting finite carbon budgets has proved a useful environmental policy tool at national level, but to date has failed to gain traction on an international scale. Are concerns over fairness and cost justified, or could it offer the global community its best chance for tackling climate change?

The world is approaching the point at which it needs to start to get serious about international action to address climate change. The UN climate change process has now been underway for nearly a quarter of a century since the UN Framework Convention on Climate Change (UNFCCC) was signed in 1992. Over that period, global CO2 emissions have risen by 52 per cent.

Researchers at Oxford University have calculated that the world can emit no more than 750 billion tonnes of carbon in total to have a less than 25 per cent risk of exceeding 2°C of global average warming.¹ The world has already emitted more than 500 billion tonnes of this ‘emissions budget’ since the mid-18th century, leaving only 250 billion tonnes remaining. On current rates, this is likely to be used up within the next two decades.

As governments approach the 2015 UN climate summit in Paris, there are strong scientific reasons for them to consider basing international climate policy on a global emissions budget. This would be designed to keep the world below the 2°C threshold, and would be allocated between all the world’s countries.

The idea of emissions budgets is already embedded in some national contexts – most notably the United Kingdom, where the 2008 Climate Change Act set a long-term, legally binding emissions-reduction target for the UK of at least 80 per cent below 1990 levels by 2050. The Act also created an independent Committee on Climate Change charged with advising the government on emissions targets and reporting to Parliament (and publicly) on progress made towards them.

However, the idea of doing the same at a global level has to date made much less headway. The idea of a global emissions budget is often seen as politically impractical by country negotiators – above all because of the charged issues of equity and fairness involved.

On the one hand, it is hard to imagine developing countries ever agreeing that a common property resource like the atmosphere should be allocated indefinitely on the basis of ‘grandfathering’, with countries’ allocations in proportion to their current emissions. Given that countries’ emission levels are themselves usually proportionate to GDP, allocating an emissions budget on this basis would in effect be creating new property rights to a global commons, and then sharing them out on the basis that the richer a country is, the larger its share should be.

On the other hand, many developed-country negotiators have to date assumed that an allocation of emissions quotas on an equal per capita basis would be ruinously expensive for them, and as a result politically unsellable to their electorates.

While proposals have been advanced as ways of bridging this gap – most notably, the idea of a managed process of convergence to equal per capita rights over a negotiated period that could be decades long, first proposed by the Global Commons Institute – these have not to date achieved a major breakthrough in the UNFCCC negotiations.

The idea of a global emissions budget has hence remained off the table for most of the history of the UN climate process, despite the fact that the need for such an approach could readily be seen as implied in Article 2 of the UNFCCC. This defines the overall objective of the Convention as “stabilisation of greenhouse gas concentrations in the atmosphere at a level that would prevent dangerous anthropogenic interference with the climate system”.

Against this backdrop, we were interested to explore what the financial implications would be for different countries of basing international climate policy on a global emissions budget and then sharing it out equitably. Would it be as expensive for high-emitting countries as they fear? Conversely, what would it mean for flows of finance to low-emitting countries? This is an especially topical question in a year that will see the definition of new global Sustainable Development Goals (SDGs) to take over from the Millennium Development Goals.

To explore these questions, we built a detailed quantitative model called SkyShares that calculates both: Reference Scenario
Our headline finding is that an approach based on fair shares of a finite carbon budget is both surprisingly affordable for higher-emitting countries and potentially game-changing as a source of finance for development for lower-income countries if emissions trading is permitted (something that higher-emitting countries also have every incentive to push for, given that it substantially reduces their costs of compliance).

On the other hand, lower-emitting emerging economies would be net beneficiaries of the framework in early decades. India would gain 2.6 per cent of GDP a year in 2025 and Brazil 0.5 per cent, though they would then face net costs rather than benefits from around 2045 onwards.

Low-income countries (LICs), finally, would stand to gain substantially in our Reference Scenario, given their very low per capita emissions. Ethiopia, for example, would stand to make 27.2 per cent of its GDP a year from emissions trading by 2025, and Bangladesh 9.5 per cent. LICs as a group would gain 6.4 per cent in 2025.

In dollar terms, the net financial flows to lower-middle-income countries would amount to $267 billion in 2025 (approximately twice as much as the $135 billion of total global Official Development Assistance flows in 2013), while those to LICs would total approximately $152 billion. This would therefore represent a major new source of finance for development and for delivering the SDGs.

Historical Responsibility Scenario
We also created a ‘Historical Responsibility Scenario’ for comparison purposes. This is based on the same mitigation parameters as the Reference Scenario, and is likewise based on convergence to equal per capita entitlements. Unlike the Reference Scenario, however, this version converges to equal per capita shares of stocks of atmospheric carbon. In other words, it takes account of past emissions as well as current ones, going back to 1800, and then adapts future allowances correspondingly. Overall, this has the effect of reducing upper-middle-income countries’ costs and increasing those of developed countries. Under the Historical Responsibility Scenario, we find that:

China is an outlier in the Historical Responsibility Scenario in that while its costs become proportionately cheaper than those of the US in both 2025 and 2050, they rise in absolute terms in the earlier years of the framework. Under this scenario:

Conclusion
One of the objections sometimes made to proposals based on defining and sharing out a global emissions budget is that it would create a ‘zero-sum’ dynamic as countries squabble over shares of a finite resource, and would make no allowance for future advances in technology that would one day bring down the cost of emissions reductions.²

We believe this argument to be wrong on two counts. First, we think it is based on a misapprehension of how to manage shared environmental commons. As Nobel economics laureate Elinor Ostrom and others have pointed out in rebutting Garrett Hardin’s famous ‘tragedy of the commons’ argument, recognition of the need to cooperate to manage shared commons can be a uniquely powerful driver for positive sum dynamics.

Second, we believe that this argument overlooks the fact that it is precisely quantified caps on emissions that are most likely to bring down the costs of clean technology – in effect creating a virtuous circle whereby demand for lower-emission technologies reduces their costs and makes them more widely available. Our approach does not merely anticipate future advances in technology; it prices them in, and also takes seriously what will be necessary to drive those advances.

Above all, we think that the approach set out here is practical, not utopian. A framework based on the principles we have outlined would not depend on full global participation at the outset: on the contrary, it could work with a coalition of the willing, as the SkyShares model will illustrate for any combination of countries. While recognising that any comprehensive approach to climate change will involve costs, unrestricted use of emissions trading between participants keeps these costs as low as they can be.

Above all, we believe that the recent disappointing track record of multilateralism and the ongoing leadership deficit points to an unmet need for big ideas about how we can take control of our shared global future. We believe that this is just such an idea.