A ‘Moore’s Law’ for decarbonisation?

We need to halve carbon dioxide emissions every decade between now and mid-century. Can we do it? 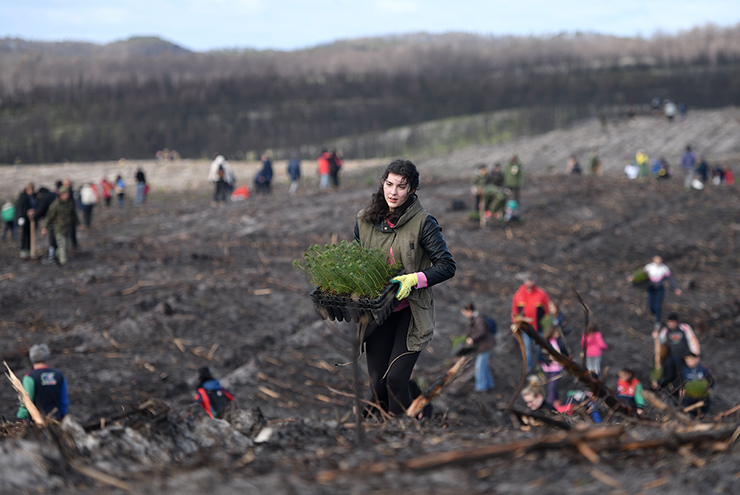 A ‘Moore’s Law’ for decarbonisation?

We need to halve carbon dioxide emissions every decade between now and mid-century. Can we do it?

Climate change is an enormous challenge facing humanity. Emissions of greenhouse gases (GHGs), in particular of carbon dioxide (CO2), are the main sources of human interference in the climate system. During the past half century, the calls for radically reducing GHG emissions led to significant international agreements, culminating in the 1997 Kyoto Protocol. But global emissions continued to increase, and we recently passed a number of tipping points.

In 2015, nearly two decades after Kyoto, the Paris Agreement saw world leaders adopt the ambitious and aspirational goal to stabilise climate change to below 2°C above pre-industrial levels – and if possible to below 1.5°C. The science reflected in the five assessments of the Intergovernmental Panel on Climate Change (IPCC) during the past 30 years is clear: to achieve a two-thirds probability of remaining below the 2°C threshold, cumulative net emissions of CO2 from 2012 onwards must not exceed much more than 1,000 billion tons of CO2.

The recent IPCC Special Report on Global Warming of 1.5°C indicates a slightly higher budget of up to 1,300 billion tons of CO2 to achieve the same stabilisation level of 2°C, which would give a bit more flexibility but does not change urgency or any implications.

The need for immediate action
Given that emissions are increasing, the world is, unfortunately, not on the path to achieve stabilisation at 2°C. Rather, we are heading towards more than double this level of global warming. This is comparable to the global temperature change from the Earth’s glacial to interglacial periods, which occurred on a geological scale of some 120,000 years. If current trends continue, the world is poised to achieve the same temperature change in a mere 200 years.

The last 10,000 years – known as the Holocene – have been characterised by very subdued changes in global temperatures, allowing humanity to settle down, develop agriculture and establish the first great civilisations. The current age has been characterised as the Anthropocene, a period during which one single species has acquired the capacity to change the climate and earth systems.

Such catastrophic rates of climate change require concentrated and immediate action. Emissions need to start declining immediately and come down to net zero by mid-century, if we are not to exceed our remaining emissions budget.

CO2 emissions from energy and all other sectors, specifically including land use, must peak and exponentially decline. Today, about half of global emissions remain in the atmosphere and the other half are removed by natural sinks, mostly into the deep ocean. These earth-system services must be maintained and strengthened.

Falling short on these goals means that we may need to achieve net-negative emissions in the future to offset the level of cumulative emissions. One possibility is afforestation, establishing forests where there were none previously. Another is bio-energy with carbon capture and storage, or BECSS. This includes many components that already exist at commercial scales, although the technology is yet to be deployed. Recently, there have been many calls for direct carbon capture from the atmosphere, a technology that exists at the pilot level, but needs commercialisation and to be scaled up.

Moore’s Law
A metaphor for what needs to be done is Moore’s Law, which states that the number of transistors on a chip will double every 2.5 years. This exponential progress is clearly not automatic, but is rather the result of strategies, innovation and vigorous plans and investments of the semiconductor industry.

By analogy, determined efforts to mitigate climate change also require strategies and roadmaps, as deep emissions reductions affect all spheres of human activities. Last year a number of us proposed the ‘carbon law’ (A roadmap for rapid decarbonization, Rockström et al. 2017). This specifies that global CO2 emissions must halve every decade, approaching zero by mid-century. The carbon law implies a transformational change of most human activities, including behaviour and lifestyles. It would apply to all settlements: from villages to mega cities, in all regions and nations, and across all sectors, from industry and energy to land use. In other words, achieving the ‘Moore’s Law of decarbonisation’ is a Herculean challenge. It requires the emergence of new values, norms and institutions. Science, technology and innovation are essential for decarbonisation and sustainable development.

A critical obstacle is that decarbonisation, as an essential component of sustainable development, is currently not a self-organising property of market-based economic systems. The ‘invisible hand’ allocates only those scarce resources that are included in price setting. In practice, this renders many essential dimensions of decarbonisation and sustainable development exogenous, resulting in development that is rarely socially inclusive and environmentally sustainable. What we need is a dual strategy that pushes renewables and other zero-emissions technologies while at the same time phasing out fossil fuels from the market.

The carbon roadmap
Transformative change can only come about through the formulation of roadmaps and regulatory mechanisms to complement and reform essential markets. These range from norms and standards to taxes for rapid decarbonisation. Meanwhile roadmaps – planning instruments that link shorter-term targets to longer-term goals – can help to align actors and organisations to instigate technological and institutional breakthroughs to meet a collective challenge.

All told, the transformations required for economies to stay on a carbon-law trajectory encompass values, norms, innovation, institutions, infrastructures and investment. An explicit carbon roadmap for halving anthropogenic emissions every decade could help promote disruptive, nonlinear technological and institutional advances toward a zero-emissions world. If designed with decadal targets and incentives, it could provide key elements for local, national and international climate strategies.

The world is now at a crossroads: one path is transformation towards a sustainable future, the other is business as usual. The latter might appear the easier road to take, but it will lead to increasing inequalities, environmental degradation and transgression of planetary boundaries. Instead, we must find a way to put the carbon law into practice.

To fully turn the story around and deploy all possible synergies, the carbon roadmap needs to be an integral part of the Sustainable Development Goals. A new report by The World in 2050 initiative shows that six key transformations are essential and can enable the world to meet the Global Goals. These transformations encompass all the major drivers of societal change, including human capacity, consumption and production, decarbonisation and the digital revolution. They imply deep structural changes; profound reforms of institutions; shifting mental maps and norms; changing patterns of human behaviour; widespread awareness-raising and mobilisation; the adoption of a complex, adaptive-systems approach to sustainability issues; and unprecedented problem-solving.

Holistic approach
As transformative change is needed, countries around the world require transformative governance. In view of the complexity and breadth of the changes occurring, and those to be expected, it is essential that world begins an effort to move beyond the sectoral and fragmented approach that much sustainability research has followed to date.

We should not just investigate the role of water, food or energy, or even the water-food-energy nexus. Rather, we should design an approach that truly integrates all possible domains affected, focuses on tradeoffs and co-benefits, and generally takes a holistic perspective that is at the core of the 2030 Agenda.

Another synergetic approach of the 2030 Agenda strives to harness science, technology, and innovation to accelerate progress. This holistic approach implies that the full complexity of the dynamics involved in each domain of social, social-environmental and social-environmental-technological interaction – from the basic values and world view of individual societies and cultures, to their ways of interacting, their institutions, their governance, and so on – will play out and impact on every aspect of present and future societies.