A new deal for nature?

The UN Biodiversity Conference is a chance to set the world on a new path to halting catastrophic biodiversity loss. Nations must act on this opportunity before it’s too late 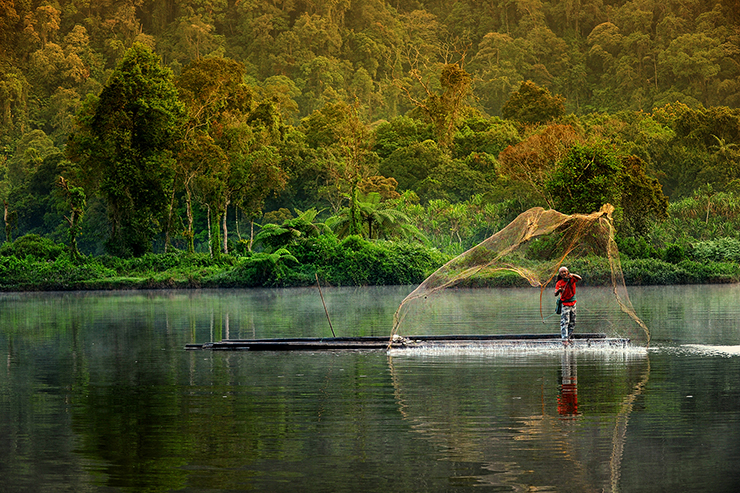 Traditional fishing in Situ Gunung lake, Sukabumi, West Java. The Indonesian island of Java is part of the Sundaland biodiversity hotspot – a biogeographic region with significant levels of biodiversity that is threatened by human habitation. © Ricky Martin/CIFOR

A new deal for nature?

The UN Biodiversity Conference is a chance to set the world on a new path to halting catastrophic biodiversity loss. Nations must act on this opportunity before it’s too late

When people think of biodiversity, chances are they think of a dense rainforest in the middle of Borneo, or a pristine coral reef in the heart of the Coral Triangle. But the truth is, even our houses in the suburbs are teeming with biodiversity: the spinach we eat, the grass on the lawn, the orange juice we drink, the fungus on our stale bread. Biodiversity is not just the abundance of life on Earth. It is what provides us with air, food and water, and maintains our life and our resilience.

In my part of the world, the Asia-Pacific region, people are highly dependent on the marine, aquatic and terrestrial biodiversity for their survival. The benefits provided by biodiversity thus play a critical role in economic and human development, as well as the cultural and spiritual fulfilment of the population.

Asia-Pacific is one of the most diverse regions in the world, in terms of its social, cultural, biological, climatic and geomorphological make-up. It hosts a high number of endemic species and unique ecosystems of tremendous biological diversity, containing 17 of the 36 global biodiversity hotspots and seven of the 17 megadiverse countries. It has the greatest marine diversity globally, with the longest and most diverse coral reef systems in the world, and more than half of the world’s remaining mangrove areas. And, more importantly, 4.5 billion people – more than 60 per cent of world’s population – live across this region.

Biodiversity and ecosystem services have contributed to the rapid economic growth of the region. But growth has also come at a hefty environmental cost. A high rate of species and habitat loss, environmental pollution and deforestation have accelerated biodiversity loss, and even led to permanent loss of biodiversity in terrestrial and marine ecosystems.

The impacts are already being felt, especially by indigenous peoples and Asia-Pacific’s poorest and most vulnerable communities. They are suffering a continued loss of subsistence and livelihoods from ongoing deforestation and unsustainable fishing practices, as well as impacts on health from pollution and water insecurity.

The relationship between people and the planet is dangerously unbalanced. We are seeing increasing evidence of this in the impacts on our lives. According to the National Oceanic and Atmospheric Administration, the 20 warmest years on record have all occurred since 1995. The five hottest have all come in the 2010s.

The World Economic Forum (WEF) estimates that the top five most likely risks facing the world over the next decade are all related to the environment: extreme weather, climate action failure, natural disasters, biodiversity loss, and human-made environmental disasters. Biodiversity loss is ranked as the second highest impact risk in the next decade. The WWF Living Planet Report 2018 shows that, incredibly, the size of vertebrate populations across the Earth declined by 60 per cent on average between 1970 and 2014.

The costs of action are dwarfed by the costs of inaction. The Asia-Pacific region witnessed 50 per cent of the world’s ‘natural’ disasters in 2018 – catastrophes exacerbated by environmental damage. These disasters affected over 50 million people, and cost the region a total of $56.8 billion, according to IPBES’s 2019 Regional Assessment Report on Biodiversity and Ecosystem Services for Asia and the Pacific.

Unless we urgently change course, there will be catastrophic impacts for life and livelihoods. Nature holds the key to our prosperity, if managed well and sustainably. Each year, around $125 trillion worth of ecosystem services are provided to the global economy through drinkable water, water for industrial processes, food, fresh air, heat absorption, sources of medicines, productive soil, and forests and oceans that soak up carbon (according to the WEF’s Global Risks Report 2020). Nature loss risks economic development, and some of the fastest-growing economies in the world are particularly vulnerable. Therefore, addressing both climate change and nature loss is a social and economic imperative.

Charting a new course
The next year brings an opportunity for all of us to chart a new course, with the postponed UN Biodiversity Conference taking place here in Asia. Parties to the Convention on Biological Diversity will meet at COP15 in Kunming, China. They must help deliver the transformative change required to safeguard the future for people and all life on Earth. We need a strong and ambitious agreement on the post-2020 global biodiversity framework if we are to halt and start reversing the loss of nature.

This year, we must set a new and sustainable direction for the Earth. Government, business leaders and society at large should all agree to change the way we treat our planet. We must renew our commitments to tackle climate change and improve people’s lives. We must have, as WWF advocates, a New Deal for Nature and People. This new deal will have a new narrative that recognises the intrinsic value of nature and the moral imperative for us to coexist with the diversity of life on our planet. It will also position nature and biodiversity at the centre of the sustainable development agenda.

We also need to raise our ambition and scale up our actions. The way we produce food on land, fish the oceans, use forests and river systems, extract minerals, and build infrastructure are today’s main drivers of nature loss. The post-2020 global biodiversity framework must now show the will to drive the change that is needed. Transformation of the world’s economic and financial systems is critical to reversing nature’s depletion and achieving the Sustainable Development Goals.

NASA’s New Horizon, after its 14-year journey to Pluto and back, has framed visuals of the last planet in our solar system. It didn’t capture any living organism in resemblance of a human being. It is clear that we don’t have a neighbouring planet to live on. Mother Earth is all we have, and is the only chance of our survival. As many others have said, “there is no planet B”. Now is the time to show the will to drive change. It is an immense challenge but – together – we can do this.