Attention-grabbing messages of impending catastrophe dominate media coverage of climate change. Does this truly engage audiences, or is a more balanced approach needed? 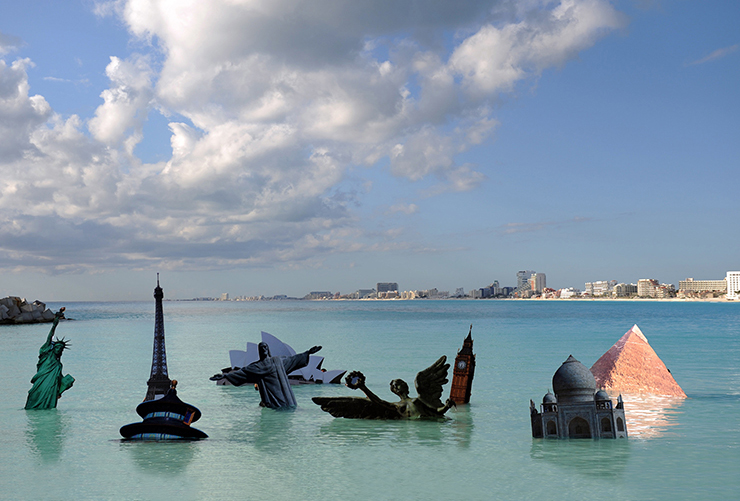 Attention-grabbing messages of impending catastrophe dominate media coverage of climate change. Does this truly engage audiences, or is a more balanced approach needed?

By James Painter , Director, Journalism Programme, Reuters Institute for the Study of Journalism, University of Oxford

Stories in the international media about climate change tend to peak in volume when there are new reports about the science, some controversy involving scientists, or UN meetings to discuss possible measures to reduce carbon emissions. The first two of these often mean that journalists, naturally drawn to novelty and controversy, emphasise the latest ‘doom and gloom’ aspects of the adverse impacts of a warming world, or stress (by implication or design) some of the uncertainties about the science.

So it’s difficult to re-shape the climate change mega-story away from disaster and uncertainty into something else, such as the opportunities around moving to a low-carbon economy or thinking of the climate challenge as one of managing risk.

Why does this matter? Doom-laden depictions of climate change are ubiquitous in the media. And results from focus groups show that while disaster narratives and images may be good at attracting attention, they are not so good at motivating genuine personal engagement or behaviour change.

Some scientists are tackling this problem head on. An inquiry last year on communicating climate science¹ led by Professor Chris Rapley at University College London spelled it out: strong appeals to fear are unlikely to avert danger and can generate defensive avoidance (“this is too scary to think about”) or worries of being pressured or constricted (“they are trying to manipulate me”). The report points out that initial states of worry and anxiety can change over time to numbness, desensitisation and disengagement from the issue altogether.

But scientific uncertainty is often misunderstood, particularly by the general public, and misinterpreted as ignorance. Or people can accept the science but not be convinced by the solutions being put forward. Uncertainty can also be an obstacle to decision-making, as some policymakers will argue that they need more certainty before they take action.

Climate sceptics, particularly in countries like the USA, UK and Australia, have exploited the uncertainties to argue that no action is needed to curb greenhouse gas emissions.² Climate change has become a highly politically polarised issue in these countries, which partisan media pick up on and reinforce.

The latest round of blockbuster reports by the Intergovernmental Panel on Climate Change (IPCC) provided plenty of source material for journalists around the world. A recent study carried out for the Reuters Institute for the Study of Journalism (RISJ)³ examined the coverage of the reports on television. In most countries, television is still the most used and trusted source of information, both for news in general and news about science. For instance, just one evening news bulletin can attract a larger audience than the circulation of a national newspaper. The channels monitored in the study have a combined audience of about 50 million viewers.

The study showed that in the television coverage of the IPCC reports, the disaster narrative was still by far the most common in the six countries examined (Australia, Brazil, China, Germany, India and the UK).

It is not surprising that disaster should be more common than the other narratives (uncertainty, opportunity and explicit risk) the study surveyed. The IPCC reports were full of the adverse impacts of runaway greenhouse gas emissions – more famine, sea-level rises, floods, hurricanes and droughts – which make for compelling news.

Indeed, several other studies show that the disaster theme is by far the most common in the coverage of climate change. At times, this ‘alarming’ story morphs into the more ‘alarmist’ language of catastrophe, calamity or doom.

But this doesn’t mean we need a plethora of overly positive narratives about climate change to try and counteract the negative ones. A balance needs to be struck. The recent New Climate Economy report, published by The Global Commission on the Economy and Climate, was a good example of giving a sober assessment of the challenges (rapid urbanisation, growing populations, resource constraints and climate change) accompanied by a positive story that cutting greenhouse emissions can be low cost and improve people’s lives.

Mind your language
The RISJ study also found that the ‘risk’ narrative hardly got a mention in coverage of the IPCC reports. This is surprising because in the press release and communication efforts around the second report (Working Group II or WGII), the IPCC went to considerable lengths to portray the climate change challenge as one of risk management. The co-chair of WGII, Chris Field, spoke repeatedly and eloquently about the need, in the face of uncertainty, to weigh up the risks of possible outcomes.

Many politicians and climate reports now use risk language. For example, British Prime Minister David Cameron has argued that: “if someone came to you and said there is a 95 per cent chance that your house might burn down, even if you are in the five per cent that doesn’t agree with it, you still take out the insurance, just in case.”

Does such language help? It may do for some audiences, particularly in the business sector, who deal every day with assessing investment, insurance and other types of risk. They were clearly the target audience for a path-breaking report published last June called Risky Business,4 which used a risk management perspective to lay out the risks for agriculture, energy and coastal real estate in the USA. The report received a lot of media coverage in the US and British business press, which helped to shift the climate change story out of its environment ghetto. This enlargement of the story into other areas like health, air pollution, financial investments or energy security demonstrated one of the best ways of engaging a wider audience and making it more relevant to their lives.