A second pathway for the future of nuclear energy

Will nuclear energy, in the form of fusion, be the answer to the world’s demand for abundant, clean energy? 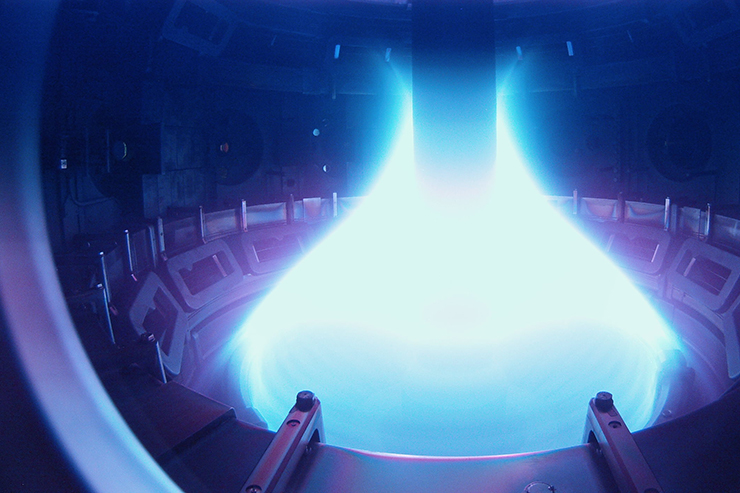 Shaped plasma inside the Mega Ampere Spherical Tokamak (MAST). MAST was a precursor to ITER, designed to improve understanding of tokamaks – devices that use magnetic fields to hold plasma in a torus (doughnut) shape. © Eye Steel Film/MAST

A second pathway for the future of nuclear energy

Will nuclear energy, in the form of fusion, be the answer to the world’s demand for abundant, clean energy?

Nuclear power is a contentious topic in climate action circles. When the world woke up to the need to act on climate change and held its first COP in 1995, nuclear power was already well established, but it was no longer a leading choice for low-carbon energy. The Chernobyl disaster less than a decade before and the subsequent Fukushima disaster in 2011 made nuclear power politically unappealing. Furthermore, the economics of nuclear power had changed. Nuclear power plants require costly safety systems, lengthy licensing times, and permanent long-term solutions for handling radioactive waste and by-products.

Today, there is a reluctance to build new plants and a movement to close established facilities. Although China is building new nuclear power plants, many European nations, including Italy, Germany, Spain, and Switzerland, are phasing out nuclear power.

These objections to nuclear power are significant. However, society struggles to identify an alternative when planning for net-zero carbon emission and accounting for global energy demand growth. In the Intergovernmental Panel on Climate Change’s Special Report on Global Warming of 1.5°C, most decarbonisation pathways call for an increase for nuclear in the energy mix.

But, the future of nuclear power has two pathways. In addition to improving the prospects for nuclear fission, scientists around the world are working to develop fusion power as a nearly unlimited source of carbon-free energy. The first tests of fusion energy production are within our reach. If all goes well and if the technical hurdles are mastered, this second nuclear pathway will address fears about accidents and radioactive waste. Continued scientific and technical success will bring greater clarity on what commercial fusion power entails and costs, and advocates of climate action may come to embrace fusion as a sustainable zero-carbon energy source.

Realising fusion
Heavy hydrogen, known as deuterium, is found everywhere in water. If it were used to fuel nuclear fusion power plants, then the entire world’s energy needs could be supplied with a small stream of water equivalent to rain falling across one square kilometre. Fusion would give us abundant, clean energy, with no fuel costs and no greenhouse gases. This enormous potential has motivated three generations of scientists to develop the knowledge needed to realise fusion power. Today, after decades of research progress, there is growing optimism that the obstacles facing practical fusion power may finally be surmountable.

Commercialisation of fusion energy would transform energy production and dramatically reduce carbon emissions. Governments have supported fusion research for decades, and fusion research represents one of the largest energy development efforts the world has ever seen. But, even after decades of effort, many challenges remain. Fusion already exists: it is the power of the sun and the stars. But, delivering fusion energy for humanity is far from easy. It requires combining the scientific knowledge of astrophysics with the technical know-how of nuclear power engineering.

Today, there is good cause for optimism that a path towards practical fusion power is in hand. Using several large and sophisticated experiments, scientists have tested and understood how very strong magnetic force fields confine ionised hydrogen gas at temperatures 10 times hotter than the heart of the sun.

So far, the largest fusion science experiments have produced a fusion power equivalent of 1,000 homes. But the power from these experiments was released in pulses lasting only a few seconds and only while scientists injected heat to keep the heavy hydrogen hot.

A game-changing experiment
ITER, set to be world’s largest science experiment, offers a step change in the evolution of fusion technology. Begun in 2010 and now more than halfway to operation, ITER is designed to release fusion power at the scale of a power plant – and be the first experiment to release more fusion power than injected. The project will also demonstrate many (though not all) of the technologies needed for delivering electricity from fusion.

ITER was designed to be the smallest possible device to produce 10 times as much power as needed to reach high fusion temperatures, while also sustaining fusion power for long pulses. To achieve this, ITER is being built with the world’s largest system of superconducting magnets. The strongest of these magnets are made from a specially prepared superconducting metallic mixture of niobium and tin, discovered in 1954. To confine the burning plasma, ITER’s gigantic magnets generate a peak pressure of 500 atmospheres and must be supported within a massive cage of stainless steel. Superconductors are also used in the Large Hadron Collider (LHC) particle accelerator at CERN.ITER’s superconducting magnets, however, will be five times larger than the LHC magnets.

In the 1980s, the International Energy Agency (IEA) sponsored the first tests of niobium tin magnets for fusion at a test facility at the Oak Ridge National Laboratory in Tennessee. At the same time, fusion scientists from around the world learned how the magnetic force field confined hot fusion fuel. An entire new field of plasma physics, including the physics basis for the ITER design, was created. Today, scientists use supercomputers to predict the flow of energy and particles within the fusion device and, importantly, make predictions on how to maximise energy production.

Research beyond ITER
In addition to ITER, we need more research to improve and fully enable fusion electricity. Materials that surround the energy-producing burning plasma must survive in an environment comparable to that near the surface of the sun. These material systems must be maintained reliably, extract heat efficiently and generate electricity. Finally, a commercial fusion power system that generates electricity for years must safely breed the heaviest form of hydrogen – tritium – from lithium and must continuously recirculate unburnt fusion fuels back into the reactor.

The expectations of research programmes around the world are to meet these technical challenges with innovative engineering and research led by nuclear power experts. Governments can accelerate progress and bring fusion energy online sooner. They can support the testing of fusion energy technologies as part of a cost-conscious, goal-oriented effort to integrate innovative engineering systems with magnetic fusion confinement science.

The best way to speed the pace of fusion energy development is to reduce the size and capital cost of fusion power plants. Instead of large research facilities like ITER, whose high costs are shared by many nations, next-step fusion power plants that generate electricity will utilise manufacturing and materials innovations that can make them smaller and less costly than ITER.

The combination of improved confidence that ITER will produce fusion power at the scale of a power plant and new high-field superconductors that will make fusion devices smaller has attracted the participation of private industry in a race to establish leadership in fusion energy technologies.

Almost 40 years ago, the IEA and government agencies funded the first large tests of niobium tin magnets that are used in ITER. By contrast, today, private companies, including Commonwealth Fusion Systems (based in Cambridge, Massachusetts) and Tokamak Energy (based in Oxfordshire), aim to conduct the first tests of large high-field REBCO magnets for fusion. If these magnets can reach twice the strength of the magnetic force field used in ITER, then the size of the fusion containment device can be made twice as small (with an eight-fold reduction in volume) while also achieving a fusion power density at least 10 times higher.

The long road to commercialisation
Even with strong international support from governments and the growing participation of private industries, the race to commercial fusion energy is a marathon, not a sprint.

The new science of magnetic fusion confinement and the new technologies that will make fusion economically attractive still require decades of research and development. Near-term climate change concerns will need to be addressed by other energy technologies. However, with history as our guide, humanity’s needs for energy will grow beyond the near term. The goal of fusion scientists and engineers is to meet humanity’s long-term needs with fusion-generated electricity.

The fuel for fusion energy is everywhere and practically limitless. The potential to tap into this energy source, the progress in fusion as demonstrated in the construction of ITER, and the discoveries in superconducting magnet and manufacturing technologies combine to inspire confidence that fusion energy will become the global choice for clean energy in the long term.