How do countries whose wealth is built on fossil fuels transition to a low-carbon, sustainable future? 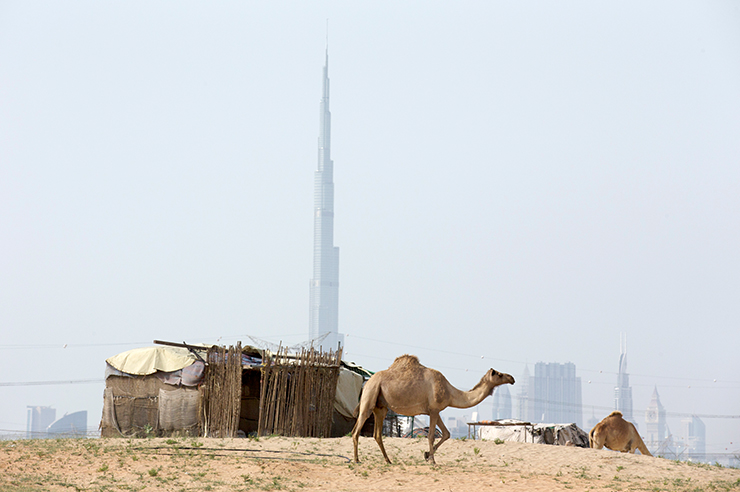 Dwellings of camel herders on the outskirts of Dubai, United Arab Emirates. The Gulf states that have used energy subsidies to fuel lavish consumption must urgently focus on economic diversification © Warren Little/Getty Images

How do countries whose wealth is built on fossil fuels transition to a low-carbon, sustainable future?

If many saw peak oil as an imminent fact during the oil boom of the 2000s, it has now been replaced by expectations of ever-lasting abundance. The unconventional oil and gas revolution in the US has become a game changer.

Rather than rising to the stratosphere, oil prices are set to fall to the bottom thanks to plentiful supply – so the story goes. Coal’s position is even less enviable as it is crowded out by the improved economics of natural gas and renewables, and – in some countries – favourable legislation for these competing energy sources.

In the longer run, the transition to renewable energy might weigh on hydrocarbon prices, and not only in the power generation market. The transportation sector, for example, could also change considerably. Electric mobility and battery technology are being buoyed by falling prices and technological improvements. These and other energy storage solutions are helping to ease the integration of renewables in existing energy mixes.

Despite the US administration announcing its intention to withdraw from the Paris Agreement, political support for energy transitions still remains strong among the other signatories – but also within the US itself on a municipal and federal state level.

The UN’s Sustainable Development Goals that were launched in 2015 are also supportive. To have a 66 per cent chance of meeting the Paris climate goals, the world needs to halve oil production and stop using coal for power generation. That means 80 per cent of current coal reserves, one third of oil and half of natural gas would have to be written off. Conflicts about who will bear the costs are starting to emerge.

Negative perceptions about the future of hydrocarbons have trickled down to the ranks of oil exporting countries. Low oil prices threaten their sociopolitical fabric. Oil revenues finance public sector jobs, welfare payments, armies and government agencies. Even the private sector depends on subcontracting from oil-financed states.

Whereas the chief economic benefit of commodity extraction is derived from owning the resource, the economics and value chains of renewable energy landscapes look very different. Sunlight and wind are free. Revenue generation in the energy world moves up the value chain, from commodities to technologies.

Countries that see their commodities fall in value but who do not have the capital and skills to master low-carbon technologies will lose out. Their revenue streams will decline. Unpaid bills, wages and contracts might lead to unrest and financial crisis.

Some oil exporters have started to reckon with this new reality. They have repatriated foreign assets to finance budget deficits that have emerged in recent years. Diversification away from oil is declared government policy in all countries of the Gulf Cooperation Council (GCC), especially in the United Arab Emirates (UAE) and Saudi Arabia. The latter launched Vision 2030 in 2016 with the goal of tripling non-oil revenue and balancing the budget by cutting subsidies and introducing a value-added tax.

The UAE has a renewable energy programme and has managed to attract the International Renewal Energy Agency (IRENA) to Abu Dhabi against stiff competition from Bonn and Copenhagen. Saudi Arabia and Qatar trail behind, but have also launched initiatives to promote renewable energies on a large scale, especially solar. The former Saudi oil minister Ali Al-Naimi even suggested that one day Saudi Arabia could make a living from exporting solar-generated electricity instead of oil.

Some of the goals are not as ambitions as they may seem. The UAE’s target of seven per cent power generation capacity from renewable sources by 2020 would only translate into a 2.5 per cent share of actual power generation, because of the intermittencies of such sources.

Some have suspected greenwashing and playing to the international gallery by a country that has one of the largest carbon footprints per capita in the world. GCC economies are heavily geared towards energy-intensive industries and lifestyles. Energy subsidies for such lavish consumption are part of the social contract and can only be cut back at a political cost.

Still, the GCC countries have had some success with economic diversification. They have moved up the value chain and are major players in heavy industries such as petrochemicals and aluminium. Logistics, tourism and services have developed into important sectors for the economy, not only in Dubai. Compared to countries such as Venezuela and Libya their starting position is more comfortable, thanks to their relative political stability. Yet their dependence on oil revenues is more pronounced than in Russia and even Iran, both of which have less dynamic and open economies.

Will the electric car be a major threat to future political stability in the Middle East? This is a distinct possibility. Yet planes will still need kerosene, trucks diesel and ships fuel oil. About 30 per cent of oil consumption is used by the petrochemical industry and is unlikely to dwindle anytime soon. Production declines in ageing oil fields require reserves to be replenished, which is hampered by lagging investments.

The clock is ticking
Even in the case of a long-term renewable energy transition there might be a rebound of oil prices in the middle run. Yet oil exporters clearly do not count on it. The decision to float a five per cent share of the state-owned oil company Aramco at a time when oil prices have fallen indicates that the Saudi rulers do not expect sustainable higher prices in the future.

But when it comes to preparing for the future, the undisputed leader within the oil world is Norway. The Scandinavian country holds the largest sovereign wealth fund in the world, worth $959 billion, whose resources mainly come from the nation’s oil and gas export revenues.

As Norway’s Government Pension Fund Global website candidly explains: “[the fund] is saving for future generations in Norway. One day the oil will run out, but the return on the fund will continue to benefit the Norwegian population.” Since 2014, the fund has proceeded with a risk-based divestment from fossil fuels (i.e. oil sands production and coal-fired power generation) and deforestation (i.e. palm oil production, pulp and paper), taking into consideration both financial and climate risks.

A truly transformational change is happening in Norwegian road transportation. Through the fund, the government is using oil money to heavily incentivise the purchase of electric vehicles. Electric cars are exempt from sales tax. Drivers can charge their vehicles for free, do not have to pay tolls and can use bus lanes to avoid traffic.

Electricity generation mostly comes from hydropower. The subsidies were introduced as far back as the 1990s, but the market only started to expand in 2012 when the Tesla Model S and Nissan LEAF arrived in the market. As a result, Norway is transitioning to electric cars faster than any other country in the world. About 37 per cent of all new cars are either fully electric or plug-in hybrids, and by 2025 the government expects that no more conventional cars will be sold in the country.

The G20 will have to play a crucial role in guiding the global transition to low-carbon energy systems. The world’s wealthiest 20 countries consume 95 per cent of coal, more than 70 per cent of oil and gas, and are responsible for 85 per cent of global investment in renewables.

Over the next decade, the infrastructure investment decisions of the G20 finance ministers will determine our climate future. The improved economics of renewables and natural gas increasingly weigh on coal and oil demand. Hydrocarbon exporters such as Norway and the GCC countries have started to factor in this new reality in their investment and diversification decisions.