A gap between needed and actual private investment in climate-friendly projects remains stubbornly wide. What can governments do to get more capital flowing? 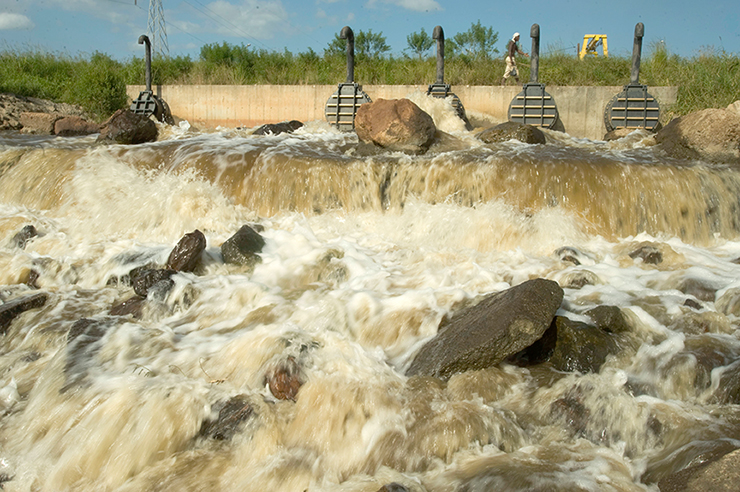 An irrigation project on the Limpopo in Mozambique, designed to protect against flood and drought damage. Adaptation projects have typically struggled to attract private finance © Jeffrey Barbee

A gap between needed and actual private investment in climate-friendly projects remains stubbornly wide. What can governments do to get more capital flowing?

The most recent analysis from the Climate Policy Initiative suggests that global climate finance flows in 2016 were $383 billion – two thirds of this was provided by the private sector. While $383 billion is an impressive number, it is well short of what is needed. The UN Framework Convention on Climate Change estimates that at least $1.5 trillion a year will be needed between 2017 and 2030 to meet the Paris Agreement goal of keeping average global temperature rise well below 2°C – and as close as possible to 1.5°C.

The fact that billions of dollars of capital is now flowing suggests that the most important policy question is no longer how to enable climate finance to flow. Rather, it is how might these capital flows – in particular from the private sector, the likely key engine of growth – be accelerated and scaled up?

Our experiences to date suggest we need to focus on the financial characteristics of the investments themselves, on domestic climate change policy, and on climate finance policy.

The investment case
Huge amounts of private capital have been invested in solar and wind energy, industrial and domestic energy efficiency, and low-carbon technologies, in particular in developed countries. These are all areas where there is a clear financial case for investment.

There has, however, been much less private-sector investment in areas such as REDD+ (reducing emissions from deforestation and forest degradation) and climate change adaptation, and in the less developed countries. This is, primarily, a function of the basic financial characteristics of these investments. In the absence of financial support, such investments may be unattractive to a private-sector investor on a formal financial risk–return basis.

Investment is also hampered by the perception that these areas and these countries are riskier than others. This is particularly the case with newer technologies and in countries where there has been relatively little low-carbon investment.

Ultimately, these concerns can only be addressed through the relatively wide deployment of the technology, enabling its operational and financial performance to be tested under a range of operating conditions and in a range of operating environments. Wide deployment also drives unit costs down, enabling technical improvements and, at the project level, lower discount rates (as the technology is progressively seen as ‘less risky’).

Climate policy
Nearly 190 countries have submitted nationally determined contributions (NDCs) towards realising the Paris Agreement, committing themselves to meeting ambitious goals in areas such as renewable energy, energy efficiency and sustainable land management. Many governments have started to implement their NDC commitments by adopting carbon pricing and other market support schemes, setting energy-efficiency and other performance standards, and removing fossil-fuel subsidies. Clearly there is much more to be done – but the direction of travel is clear.

Governments need to be aware that investors often identify policy risk as the major risk to low-carbon investment. This is because many low-carbon investments (for example, more innovative forms of renewable energy, or adaptation) require some form of explicit policy support, often over extended periods of time. Investors are concerned that election cycles and the inevitable shifting of government priorities mean that policy support cannot be guaranteed over the financial life of their investments.

Unfortunately, investors have an asymmetric view of public policy-related risks. They take a long time to recognise and reward governments that do a good job in this area, but are quick to criticise and to slow or stop their investment when they perceive governments as taking action that damages their interests.

Climate finance policy
Domestic private-sector investors and finance institutions, in particular in emerging markets, often lack the capacity and expertise to analyse and assess the risks and opportunities associated with investments in areas such as renewable energy and energy efficiency. These gaps can be addressed, at least in part, through focused technical assistance and capacity-building, both on deal origination and on the technical assessment of climate change-related mitigation and adaptation opportunities.

Another part of the solution is ensuring that high-quality information is available to decision-makers. This information will depend on the specific investments required but could include analysis of the financial and technical performance of previous projects, and case studies of how particular projects were developed and specific barriers overcome (for example, innovative approaches to climate-proofing existing infrastructure). Inevitably, however, the decision on whether or not to invest will depend on the availability and the deployment of often scarce public finance.

The reality is that government budgets will not, on their own, be enough to address climate change. Governments, therefore, need to think strategically about how they target their limited public funds to support project development to mobilise private capital.

While the specific approaches and priorities will differ between countries, there are a number of general actions that governments – on their own or in partnership with others – can take:

One example of a programme that combines many of these features is the World Bank’s Scaling Solar programme. The programme aims to streamline project preparation and development processes, thereby helping to accelerate the development of new solar projects in particular jurisdictions.

Replicating success
Well-designed climate change and climate finance policy can be hugely effective at attracting private-sector investment – as we see most spectacularly in the case of global deployment of renewable energy. The challenge now is to replicate this success in other areas – energy efficiency, REDD+ or climate change adaptation – and in the less developed countries. To do this, governments will need to take action across the three pillars discussed above: the financial characteristics of the investments, climate change policy and climate finance policy.