The Paris Agreement recognises that nations must do much more to adapt to unavoidable climate change. How should this be balanced with mitigation efforts? 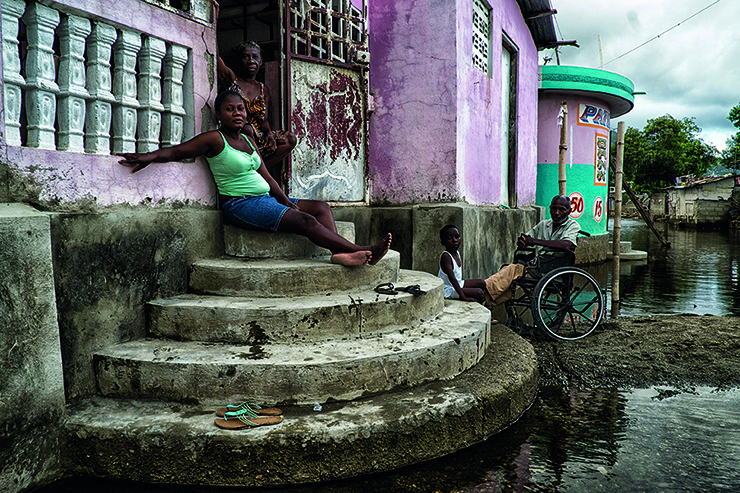 Aftermath of flooding in Cap-Haïtien, northern Haiti, that left more than a dozen dead and thousands homeless in 2014. The level of priority given to adaptation is a distinguishing feature of the Paris Agreement.
© Logan Abassi/UN/MINUSTAH

The Paris Agreement recognises that nations must do much more to adapt to unavoidable climate change. How should this be balanced with mitigation efforts?

The role of adaptation in addressing the challenges associated with a changing climate has had a chequered past – internationally, nationally and locally. Despite a historical focus on mitigation (as laid out in Article 2 of the UN Framework Convention on Climate Change), there have been continued efforts at all levels to push forward adaptation to climate change.

The Paris Agreement has been praised for placing adaptation squarely onto the international agenda alongside mitigation, thereby signalling that the two are equally important. This is particularly evident in the establishment of the global goal on adaptation (Article 7 of the Paris Agreement): “enhancing adaptive capacity, strengthening resilience and reducing vulnerability to climate change”.

Article 7 further recognises that adaptation and mitigation are mutually reinforcing, as appropriate adaptation measures could contribute to keeping global temperature rise to under 2ºC.

In doing so, the Paris Agreement also recognises that adaptation can contribute to the myriad challenges that society is facing, including demographic, socio-economic and technological. For example, adaptation efforts are seen as working in concert to support sustainable development and disaster risk management, as well as interconnected issues such as poverty eradication, human rights and environmental conservation and security.

The Paris Agreement articulates the need for a balance between support for mitigation and adaptation (see Article 9, paragraph 4 and Article 10, paragraph 6). Doing so will require addressing a number of associated challenges. One is that many people perceive adaptation as something for the longer term only, requiring investments now to address potential changes in the future.

Considering the current global financial situation and the many demands to address other existing challenges, this perception has limited the interest, willingness and ability of many to invest in adaptation.

This perception is being challenged, however. The Paris Agreement recognises that the current need for adaptation is significant and that early action will generate enduring benefits. This is evident in the global goal, which is both inspirational and conceptually ambitious. But what does it actually mean? How can it be put into operation in a meaningful and constructive manner? We now need to unpick and define the goal, in order to implement it.

Building capacities
One challenge – and opportunity – is reflected in recent efforts towards supporting adaptation directed at industry and the public sector. These have included identifying adaptation options that bring with them multiple benefits (i.e. those that also address other societal challenges) and that can build the necessary capacities to address future changes sustainably.

Such options are seen as being able to deliver immediate returns that can further justify the necessary investments and provide additional dividends (sometimes called providing adaptation and resilience dividends).

A second challenge is that adaptation is often seen as something that occurs naturally: let the market or environment simply ‘adapt’. We, as a species, have demonstrated that we are capable of adapting to different environments and circumstances, and societies have adapted  in the past (some more successfully  than others).

In the case of climate change, however, the situation is very different, with changes occurring quickly and in conjunction with other rapid shifts, placing pressures on society and our environments.

There is a need to build the necessary capacities in all states and across society, especially within developing countries, as these are – and will be – critical to progressing adaptation in an increasingly complex and dynamic world so that we can move towards a sustainable future.

The Paris Agreement recognises the importance of capacity-building, including in the context of promoting adaptation (and mitigation) ambition, enhancing public and private participation, and enabling opportunities for coordination across instruments and relevant institutional arrangements (see Article 6, paragraph 8).

Collaborative approach
The interdependencies (physical, financial, social and political) of the risks we are facing – and the responses we choose – will require a collaborative approach: sharing with, and learning from, all. In the case of adaptation responses, they can have far-reaching implications, including unexpected consequences and even potential conflicts. However, there also exists the very real potential for synergies that can increase the effectiveness of the responses – to the engaging parties’  mutual benefit.

Collaboration and cooperation are critical requirements to successfully adapt to a changing climate. They are also an essential feature across all elements of the Paris Agreement, and should be applauded.

Once the Paris Agreement comes into force, there are high expectations as to what should then happen. However, realising the adaptation goal raises a number of questions, to which answers, with supportive processes and guidelines, will need to be found. For example, what information should be collected (and how) to facilitate the proposed stocktaking of countries’ commitments, including the means of establishing reference points and tracking progress? How should adequate and effective adaptation be defined?

A common framework
Finding a way forward will require the various actors to reflect on the differentiated national circumstances, including needs, capacities and opportunities.

While a generic response will likely be meaningless, there will still be the need for a common framework within which all can operate, and which includes the means for supporting an overall assessment that reflects the status and progress towards the adaptation goal.

This means that any indicators need to allow for the fact that ‘adequate’ or ‘effective’ adaptation is very much determined by the individual nations, including the values and aspirations relating to their individual circumstances. Unlike mitigation, whereby efforts can be measured in a more quantifiable way, adaptation goals are not comparable in a meaningful sense unless they take these individual facets  into account.

The work that now follows to unravel the adaptation goal and to develop practical guidance and processes that can be implemented will be significant. This is a challenge that the international community must accept.