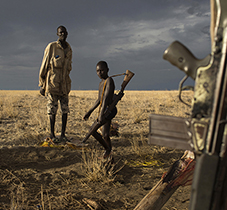 A Turkana man and a boy carrying a gun look on as a G3 battle rifle hangs from a structure used to dry fish at a fishing camp on the shores of Lake Turkana, some kilometres from Todonyang near the Kenya-Ethiopia border in northwestern Kenya October 12, 2013. The Turkana are traditionally nomadic pastoralists, but they have seen the pasture that they need to feed their herds suffer from recurring droughts and many have turned to fishing. However, Lake Turkana is overfished, and scarcity of food and pastureland is fuelling long-standing conflict with Ethiopian indigenous Dhaasanac, who have seen grazing grounds squeezed by large-scale government agricultural schemes in southern Ethiopia. The Dhaasanac now venture ever deeper into Kenyan territory in search of fish and grass, clashing with neighbours. Fighting between the communities has a long history, but the conflict has become ever more fatal as automatic weapons from other regional conflicts seep into the area. While the Turkana region is short of basics like grass and ground-water, it contains other resources including oil reserves and massive, newly discovered underground aquifers. Picture taken October 12, 2013. REUTERS/Siegfried Modola (KENYA – Tags: AGRICULTURE CIVIL UNREST SOCIETY POLITICS TPX IMAGES OF THE DAY)

ATTENTION EDITORS: PICTURE 17 OF 38 FOR PACKAGE ‘FISHING AND FIREARMS ON LAKE TURKANA’
TO FIND ALL IMAGES SEARCH ‘TURKANA MODOLA’ – RTX160YP