Asia and the Pacific has much to gain from combating climate change, having endured some of the worst climate-related disasters of recent years. But with the region producing an ever-greater share of global carbon emissions, what can it do to protect its people – and the world – from the effects of climate change? 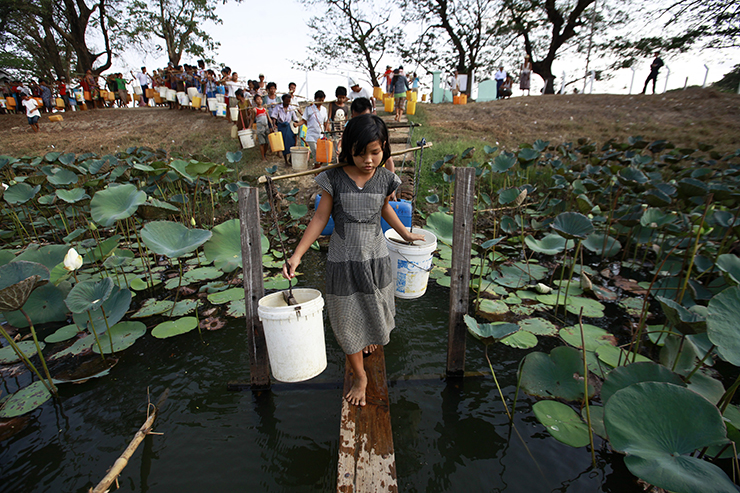 Residents of Dala, near Yangon, Myanmar, collect drinking water from the only source available to them, after the other freshwater lakes dried up.  © Soe Zeya Tun/Reuters

Asia and the Pacific has much to gain from combating climate change, having endured some of the worst climate-related disasters of recent years. But with the region producing an ever-greater share of global carbon emissions, what can it do to protect its people – and the world – from the effects of climate change?

Asia and the Pacific is exceptionally vulnerable to climate risks yet is fast becoming the biggest contributor to world greenhouse gas (GHG) emissions. This is the climate paradox of Asia, the region where the global fight against climate change will be won or lost.

It is worth considering a number of attributes that make the region particularly vulnerable to climate change. Of the 10 countries in the world with the largest number of people living in low-lying coastal zones, eight are found in the region. Bangladesh, home to a growing population of over 36 million, is a particularly low-lying country with a coastal zone of more than 47,000 square kilometres. It will face more storm surges and a projected sea-level rise that will increasingly engulf large areas of productive, densely populated land.

The population of Asia and the Pacific is expected to expand by more than 30 per cent to over 5.4 billion in the next 35 years, putting pressure on space and all other resources. The region is already home to two-thirds of the world’s poor, a group that is particularly at risk from climate change since they often live in the lowest-lying areas prone to sea-level rise or floods, and have few financial resources to fall back on in times of crisis.

Agriculture is still the region’s main source of livelihoods, with more than 60 per cent of people dependent on it. They face declining harvests caused by rises in temperatures and unfavourable weather. Meanwhile, damage to marine habitats from extreme weather, rising sea temperatures or increased ocean acidity could damage fisheries and fish catches. All these issues combined make food security a critical concern.

Migration from rural and coastal areas to towns and cities is already occurring as a result of climate change, which has made it harder to make a living by farming and fishing. At the same time, climate-related disasters like floods and storms force entire communities to move. In 2010 alone, more than 30 million people were displaced by environmental disasters in the region, bringing with it severe human and economic costs. Recent significant disasters in the Asia and Pacific region : natural disasters serve as a wake-up call to risk-prone countries throughout Asia and the Pacific to build and maintain resilience to such catastrophes.  © ADB. Source: EM-DAT – The International Disaster Database (www.emdat.be)

When Typhoon Haiyan slammed into the Philippines in 2013, over 7,000 people lost their lives and more than one million houses were damaged. The economic costs are estimated at more than $10 billion. Earlier this year, Cyclone Pam left a terrible path of destruction in Vanuatu, destroying 90 per cent of the country’s infrastructure. In all, between 2005 and 2014, developing Asia lost some 403,000 lives and suffered economic losses totalling $436 billion due to natural disasters.

At the same time, the region’s share of GHG emissions has risen to almost 40 per cent of the global total. This is largely due to rapid economic growth in several countries such as China, India, Indonesia, the Philippines and Viet Nam.

These booming economies, along with increased demand for energy from a growing and increasingly prosperous citizenry, are expected to contribute to a doubling of regional energy demand by 2030. If current trends are an indication, increased demand will be met by energy production from fossil fuels, as these are cheaper than renewable sources and also plentiful in many countries in the region. If this happens, Asia and the Pacific will be responsible for almost half of the world’s carbon emissions by 2030.

What is Asia doing?
Many recent studies, such as the Better Growth, Better Climate report from the Global Commission on the Economy and Climate, demonstrate clearly that it is possible to address climate issues while still enjoying strong economic growth.

Asian countries need to shift away from fossil fuel production and consumption and consider incentives like feed-in tariffs to help develop renewable energy. Mandates and subsidies to increase energy efficiency should also be in place, as well as policies to enhance urban resilience, given that many cities in the region are highly exposed to climate risks and natural hazards.

As part of that, Asian Development Bank (ADB) is helping India develop new solar power parks and wind energy generation facilities in several states. Public–private-partnership initiatives are developing geothermal plants in Indonesia and waste-to-energy power plants in China. Meanwhile, Dhaka in Bangladesh and Ha Noi in Viet Nam are developing sustainable transport systems, such as bus and metro rail services to ferry residents around the city.

Ecosystem and biodiversity conservation initiatives are also in progress to promote sustainable forestry and land use, including one in the Greater Mekong sub-region  that covers Cambodia, Lao People’s Democratic Republic, Myanmar, Thailand and Viet Nam.

How will this be financed?
The massive efforts at mitigation and adaptation will require billions of dollars in financing. By 2030, the cost of mitigating climate change for developing countries is estimated at an average of $160 billion a year per country. And according to the UN Environment Programme (UNEP) Adaptation Gap Report released in December 2014, the annual costs for adaptation could rise to between $70 billion and $100 billion by 2050.

The costs are too high for many countries to shoulder on their own. As a result, they are increasingly looking to the private sector – with support from bilateral and other multilateral sources – to provide much of the financing for clean energy generation and climate adaptation needs. Innovative financing approaches and market instruments are needed to leverage finance from both public and private sources.

ADB, for one, aims to ensure climate change is integrated into at least 45 per cent of its projects by 2016. Over each of the past four years, it has provided over $3 billion for climate-related activities – around 23 per cent of ADB’s total financing.

But money alone is not enough. Asia also needs regional-specific research and data. Countries can learn from each other. Collaboration has resulted in the establishment of the Regional Climate Projections Consortium and Data Facility with experts from the scientific and development communities providing an expanded range of regional climate projections.

Other partnerships include Adapt-Asia and the Asia Pacific Adaptation Network, which are playing key roles in preparing developing countries for climate change through the facilitation of knowledge sharing, as well as access to finance.

ADB is also working with UNEP for its pilot Asia-Pacific Climate Technology Finance Center, aimed at promoting low-carbon technology transfer in the region.

Action in Asia helps the world
Despite the huge requirements, financial and otherwise, Asia is demonstrating that it is willing to do its part. Going into the COP21 Paris negotiations, there are more reasons to be hopeful as developing countries like the Philippines lay out their commitment to GHG emissions reduction. Pacific countries have pledged to reduce fossil fuel dependence. Fiji has declared it will only use renewable energy by 2030.

Two of Asia’s biggest economies – India and China – are also acting. India is in a Joint Working Group on Combating Climate Change with the US and is cooperating on many low-carbon initiatives, including clean energy and the development of smart cities. In tandem with the US, China has given its commitment to peak its GHG emissions by 2030, targeting cuts of about a quarter below 2005 levels by 2025.

Such actions and joint efforts show that Asia is ready and willing to tackle climate change. That is more than half the battle won.