In a region particularly vulnerable to climate change, the poorest are most exposed. Efforts to improve prosperity must not exacerbate the problem 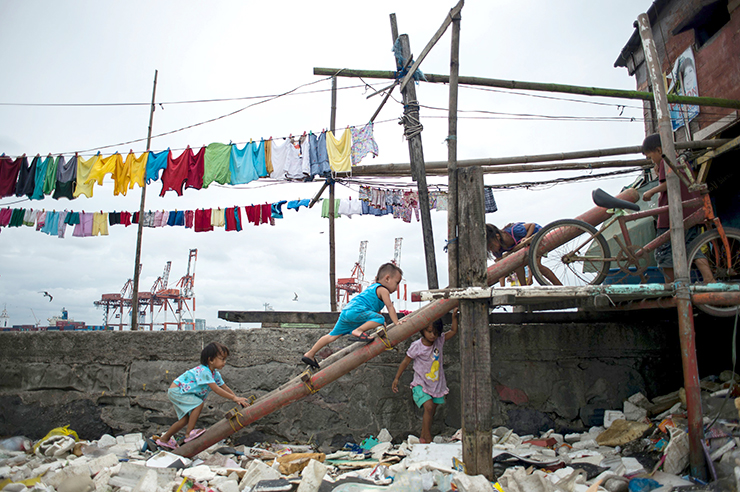 Children living on the waterfront in Tondo, the Philippines, play amongst the rubbish washed ashore following a typhoon. The country has a disproportionate number of cities threatened by sea-level rises.
© Noel Celis/AFP/Getty Images

In a region particularly vulnerable to climate change, the poorest are most exposed. Efforts to improve prosperity must not exacerbate the problem

Asia and the Pacific continues to experience rapid economic development, with the region’s economies posting 5.8 per cent growth in gross domestic product in 2016, representing 60 per cent of global growth.

For decades this growth has been facilitated by the consumption of fossil fuels. Continued economic expansion, widening access to electricity and rapid proliferation of the vehicle fleet are key contributors to Asia’s growing share of global greenhouse gases, which could rise to 48 per cent by 2030 from approximately 40 per cent in 2016. Economies in the region need to rapidly decarbonise to alter this trend.

The region remains extremely vulnerable to the impacts of climate change. A Region at Risk: The Human Dimensions of Climate Change in Asia and the Pacific, a new publication from the Asian Development Bank (ADB) and the Potsdam Institute for Climate Impact Research (PIK), shows that under a business-as-usual scenario, expected temperature increase over the land area of Asia could reach as much as 6ºC by 2100.

Even if the Paris Agreement goal to limit global temperature rise to below 2ºC is met, Asia and the Pacific will still experience a greater frequency and intensity of heavy rainfall events, widespread coral bleaching and erratic precipitation patterns. In the high mountains of Asia, glaciers will recede, increasing water discharge in rivers and flooding land and communities, while causing water shortages due to the glaciers’ diminished capacity for natural water storage. Sea-level rise will challenge the region’s increasingly urbanised coastline: 19 of the 25 cities globally most exposed to a one-meter sea-level rise are in the region; seven are in the Philippines.

Climate change impacts on human systems, including food supply (agriculture and fisheries), human health (undernutrition and heat stroke) and security and migration will be unparalleled, according to the report. Rice yields in most Southeast Asian countries could decrease by as much as 50 per cent, which could lead to an additional 26,000 child deaths (deaths of those under five years old) annually by 2030, primarily due to undernutrition.

With natural resources at the brink, poverty in rural areas could become more prevalent and migration to cities could be inevitable, leading to a growth in informal settlements. As illustrated in Figure 1, climate change not only threatens energy, water, and food security, but also has the potential to destabilise local and national economies and generate conflicts in both rural and urban areas.

Mitigation opportunities to reduce risk
Transforming the response of cities and the energy sector are key to addressing the mitigation of greenhouse gases and reducing the impacts of climate change.
Cities have the greatest opportunity to mandate the use of renewable energy, build green infrastructure, promote sustainable transport and create flood-free environments. Designing green, sustainable and resilient urban plans is essential to slowing global warming and multiplying opportunities to effectively address the future impacts of climate change. Developing Asia needs to invest an additional $300 billion per year through 2050 in renewable power, carbon capture and storage, smart grids and energy storage to avoid locking itself into a high-carbon development path that would be costlier to reverse. The study also shows that a third of the region’s emissions reductions by 2050 can come from better energy efficiency. Investment in energy efficiency is a key driver of low carbon growth.

Commitments to the reduction of greenhouse gas emissions are at the heart of nationally determined contributions (NDCs) under the Paris Agreement. Asia and the Pacific’s NDCs show the potential for the region to substantially contribute to limiting earth’s global warming, and there is leeway for bigger ambitions.

Under current NDC submissions, the People’s Republic of China has committed to reduce greenhouse gas emissions by 60-65 per cent by 2030, India by 33-35 per cent and Indonesia by 29 per cent. Under a business-as-usual scenario, these three countries were projected to comprise 89 per cent of Asia and the Pacific’s total emissions by 2030.

The ADO Update conducted various modelling scenarios for Asia’s carbon future. Figure 2 compares two scenarios: ‘INDC’ which assumes implementation of the current intended NDCs (INDCs) up to 2030 and mitigation strengthening at a constant rate thereafter; and ‘INDC to 2ºC scenario’ which follows the INDC scenario to 2030 and then assumes strengthened mitigation to meet the Paris goal by 2100.

The figure represents cuts in emissions against a base case, business as usual scenario. Under the INDC scenario to 2050, emissions would be reduced by half by China, nearly 40 per cent by Indonesia and 20 per cent by India, with the rest of the region making more modest cuts. As can be seen by the scale of the gap between the INDC and INDC to 2ºC scenarios, the region needs to adopt a greater urgency if it is to avert catastrophic climate change.

The pricing of carbon emissions and the removal of subsidies for fossil fuel based energy production and consumption will incentivise clean energy investments and facilitate decarbonisation.

The People’s Republic of China is currently readying itself to implement a national emissions trading scheme building on 10 years of emissions trading experience, initially through the Clean Development Mechanism and seven carbon market pilots. Establishing enabling environments through effective regulatory mandates such as the use of renewable energy is critical to successful proliferation of low-carbon technology.

In a report published in 2015, the International Monetary Fund demonstrated that eliminating post-tax energy subsidies could not only cut global emissions of carbon dioxide by more than 20 per cent, but also raise government revenue by approximately $3 trillion.

Such funds could then partly be used in furthering mitigation and proving support to achieving the climate resilience of rural and urban communities. The private sector also plays a vital role in reducing risk and facilitating access to clean energy investments.

Role of financial risk management for technology deployment
In support of these key policy areas, ADB has recently established the High-Level Technology Fund, with a $40 million contribution from the Government of Japan to promote a broad range of technologies and innovative solutions in areas such as climate change, energy and transport.

Figure 2. Emissions reductions by 2050 under the ‘INDC’ and ‘INDC to 2°C‘ scenarios, compared to business as usual. ADB has also established the Asia Pacific Climate Finance Fund (ACliFF) with a $30 million contribution from the Government of Germany to support the development and implementation of financial risk management products to help unlock capital for climate investments including enhancing resilience of projects.

These two funds help ADB enshrine its commitment for innovation in the region.
In 2016, ADB approved a record $3.7 billion in climate financing from its own resources and committed to scale up to $6 billion by 2020. ADB projects also mobilised an additional $701 million from external resources.

These actions are taken in recognition that Asia and the Pacific is the region where the battle against climate change will be won or lost. ADB will exert every effort to assist its developing member countries in addressing climate change through its commitments to scale up finance, enhance knowledge support and impart innovative technology.

The only way to meet the goals of the Paris Agreement and Sustainable Development Goal 13 (on climate action) is to pursue a low-carbon and climate resilient development pathway, and to do it with determination and urgency.
Solutions to both mitigate greenhouse gas emissions and adapt to the impacts of climate change will come at a cost. But the cost of not acting will be much larger and may include a reversal of the major development gains made over recent decades.