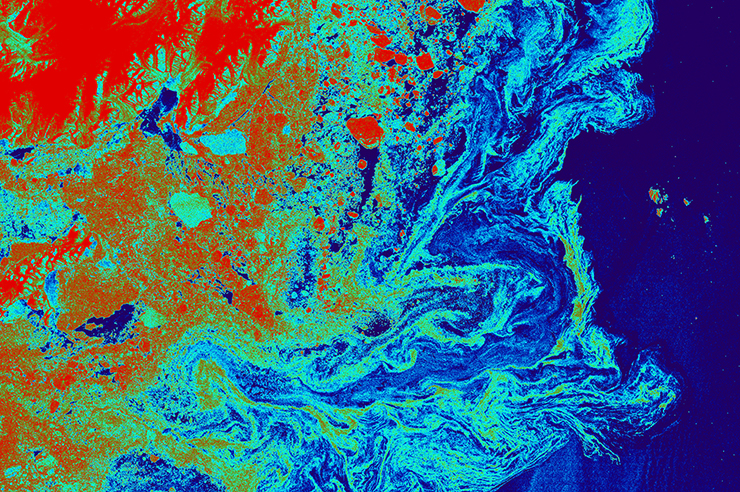 The coast of Greenland, artificially coloured to highlight ice floes on the sea

Ice is one of the many wonders of our Earth. If you have ever trekked on a stunning glacier in the Alps or Alaska, you will have had the feeling of walking on an immense reservoir. But glaciers also act as ancient and precious mines of information, allowing us to understand their evolution over millions of years.

Thanks to the SAR (synthetic aperture radar) technology of the COSMO-SkyMed satellite programme, we can see the extraordinary patterns that glaciers form. Fragmented with brilliant and unnatural colours, they resemble Cubist landscapes conjured from the brushes of a Braque or Picasso.

The polar regions are extremely important in terms of their global impact on weather, climate and the circulation of the atmosphere and oceans. Using Earth observation technology in the battle against climate change is very important to Italy. We are proud that the Italian COSMO-SkyMed constellation is now celebrating its 10th anniversary.

The constellation represents truly cutting-edge technology. Funded by the Italian Space Agency (ASI) in partnership with the Ministry of Defence, COSMO-SkyMed is built and run by the Italian space industry – namely, Leonardo and its joint ventures with Thales, Thales Alenia Space and Telespazio.

It is the first system of its kind designed for both civil and military use. Its many applications include: land and sea security; prevention and management of natural or man-made disasters; providing data on climate change, coastal monitoring, polar ice and agricultural and forestry resources; and urban control  of buildings.

In recent months, international political debate on environmental policies has become more uncertain and complicated. This is despite the ever-increasing danger signs about the fragile status of our planet.

Tipping points
In 2016 scientists warned that the increasingly rapid melting of the ice cap risks triggering 19 ‘tipping points’ in the Arctic that could have disastrous consequences around the world. These tipping points occur when a natural system, such as a polar ice cap, undergoes sudden or overwhelming change that has profound – and often irreversible – effects on surrounding ecosystems.

In political debate it is important to keep in mind the scientific data that must guide us in analysing problems and choosing solutions.  The good news is that 26 of the 50 fundamental variables for climate analysis are observable  by satellites.

For several years, COSMO-SkyMed data – processed by e-GEOS, an ASI (20%)/Telespazio (80%) company – has been widely used to provide in-depth analysis of the polar regions, the most important ‘climate controllers’ of the Earth. However, Arctic regions also offer opportunities for those seeking to commercially exploit the Earth’s natural resources. The melting of ice has inevitably made this easier.

Real-time information on sea-ice conditions is essential for all operations in ice-covered areas. The safety and efficiency of sea transportation, offshore operations, fisheries and other activities in these regions require high-resolution ice forecasts.

Earth observation (and in particular SAR technology) is a reliable tool for monitoring icy surfaces, complementing the most accurate aerial and on-site observations. It can provide critical information about the extension of the icy surface, and of the shape and movements of the ice cap. COSMO-SkyMed is also a powerful tool for measuring glacier motion, as it can perform multiple observations over a short time frame and from different visual angles.

Two recent examples illustrate the potential of the technology. The European Commission’s Earth observation programme, Copernicus – which includes the COSMO-SkyMed and Sentinel satellites – has taken images of two large icebergs that have detached from the Nansen Antarctic ice platform.

Combining different types of images gathered from satellites Sentinel-2A (optical imaging), Sentinel-1A (radar imaging) and COSMO-SkyMed, the National Committee for Research has been able to study the phenomenon since 2013.

Marine drift
Another study concerns the monitoring of the drift of marine ice across the western Fram Strait, located between the Svalbard islands and Greenland. Here the East Greenland Current carries more than 90 per cent of the marine ice that flows south from the Arctic. The current therefore serves as the main freshwater reservoir for the Arctic Ocean, and has a potential impact on the entire Atlantic Ocean. Measuring this important current is done through a boom system and through the observations made by the COSMO-SkyMed satellites.

Analysing the data is critical to predicting climatic and meteorological dynamics and to understanding changes to some of the Earth’s fundamental equilibria.

Responding to the data requests of polar scientists and from the Polar Space Task Group, ASI will continue to promote polar research and development through an open call process, based on the needs of users. But whatever the needs are, scientific or commercial, the information we are gathering will be crucial to defining the next environmental policies, and to achieving a greater understanding of our precious planet. 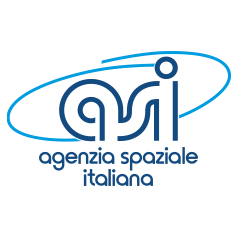