Change in the Delta 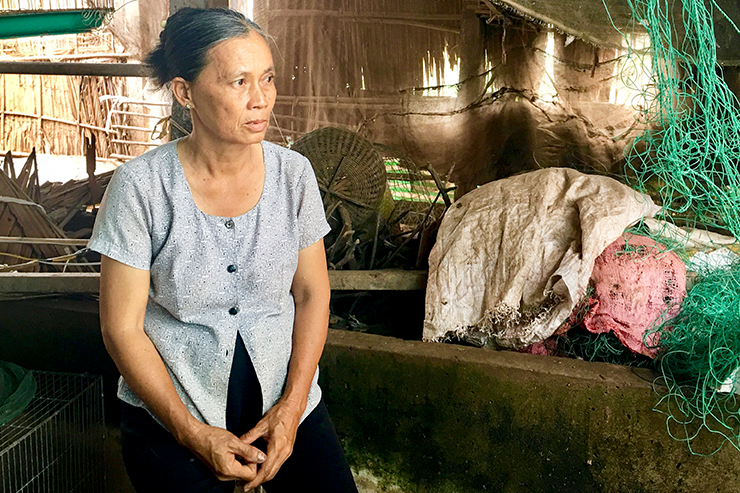 Ms Nguyen Thi Nuong, a widow living in the Mekong Delta of Viet Nam. Her home was destroyed by a hurricane in 2006 and she had to sell half her land after the drought of 2016. Now saline intrusion is making her crops unfit for human or animal consumption © Phan Huong Giang/UNDP Viet Nam

Change in the Delta

Viet Nam is extremely vulnerable to climate change impacts. Over recent years, the southeast Asian nation has experienced more irregular and intense climate variability and sea-level rise, manifesting in more unpredictable storms, flooding, drought and saline intrusion. Already-vulnerable groups such as the poor, female-headed households, people with disabilities and the elderly are more heavily affected than others.

Ms Nguyen Thi Nuong is an elderly widow living in the Phu Ngai commune of Ba Tri, Ben Tre province, in the Mekong Delta region of Viet Nam. The Delta is known as the land of white rice and clear water, and is also the country’s largest rice, fruit and fisheries producer.

But Ben Tre is also seeing the impacts of climate change. In 2016, the province was hit by a severe drought and saline intrusion. More than 19,500 hectares of agricultural land were seriously affected. Of 164 communes, 160 lacked fresh water. The river water became four times more salty than normal and canals dried up, causing tremendous difficulties for local residents.

“After my husband died two years ago we fell on hard times. But our situation got worse with the drought and saline intrusion in 2016. All our rice and vegetables died. We had to take out several loans for our farm and we lost everything,” Ms Nuong shared, remembering the country’s worst drought in more than 60 years. This is not the first time she has been hit by natural disaster. Now in poor health, she is still recovering from the collapse of her house during Typhoon Durian in 2006.

Before the drought of 2016, her family owned nearly half a hectare of land for cultivation. But to cover the cost of bank loans of over 100 million VND ($4,250), she was forced to sell more than two thirds of the land. She now rents it back for 30 million VND a year.

“I had taken out loans to build a latrine, and for land and fertiliser. But I had no idea that the saline intrusion would come so early and seriously,” she said. “The dry land could not be planted with anything.” Her debts were a constant source of worry, and she feared that her youngest son would have to drop out of school to find work.

Had the saline intrusion not come, her family would have harvested winter–spring rice and prepared for the summer–autumn crop. But the family’s entire area of rice was damaged. They did not even have straw for their cows. The impacts were felt across the whole community. With water sources dried up or saline-contaminated, many of the poorest families were forced to buy fresh water for their daily needs, at a price they could not afford. “Many also took out loans for rice seedlings and fertiliser, which they are now struggling to repay,” she revealed. “The saltwater intrusion left the river water too salty for either human or animal consumption, or to irrigate crops.

“I do not know what can help alleviate the situation. I simply store fresh water into the water tanks provided [by the government with the support of UNDP] to prepare for the next disaster,” she added. She expressed her wish to have a better and resilient future for her children.

A 2016 UNDP report, Viet Nam Drought and Saltwater Intrusion, showed that following the 2015/16 El Niño phenomenon, saltwater intrusion extended up to 20 to 30 km further inland than average – up to 90 km in some areas. While this is an annual occurrence, the level of intrusion – caused by poor rainfall, reduced flow in the Mekong River and groundwater depletion – was the most extensive ever recorded. In 2016 alone, 659,245 hectares of cropland were damaged to varying degrees – including more than 273,000 hectares of rice, the staple crop. Of the total damaged rice crops in the 18 most affected provinces, 161,030 hectares or 53.2 per cent suffered losses of 70 per cent of production or more, classified by the government as ‘extreme loss’.

UNDP’s recommendations
Sustainable and climate-resilient development of the Mekong Delta is essential for achieving the Sustainable Development Goals across Viet Nam as a whole.

The Mekong Delta and its inhabitants are increasingly impacted by sea-level rise, flooding, typhoons and storm surge, as well as by drought and decreased river discharge. These trends are exacerbated by climate change and drive knock-on impacts including land subsidence, saline water intrusion and coastal erosion. The government is committed to supporting transformative sustainable development for the Delta, and swift action is required.

Sustainable and climate-resilient development in the Delta requires learning to make nature and natural resources work for, not against, us. This can only be achieved through joined-up and integrated planning, where at least some resources are jointly managed. It also requires a consultative and participatory process, harnessing the knowledge of the diverse cultures and experience of the people in the region, and focusing on building their resilience. And it requires provinces to work together as a united area, not as single entities confined by administrative boundaries.

Making better use of the services provided by nature requires building on traditional approaches, such as ‘living with the floods’. Instead of fighting the climate and building higher dykes to block water, we should aim to understand natural dynamics and harness them to improve the quality of the landscape. We need to apply approaches such as ecosystem-based adaptation that can foster water retention for the dry season and groundwater replenishment during natural flooding.

As the climate changes, we will need innovative approaches that build sustainable resilience during droughts and periods of increased salinity. More research is needed to identify options that capitalise on natural assets, and recognise the trade-offs in land and water management – for example, between rice cultivation and water retention, or between rice production and aquaculture.

Planning and working together beyond administrative boundaries requires a real shift in thinking and integrated planning, with financial incentives. We believe that the ‘Mekong Delta Development Master Plan on sustainable development and climate change adaptation’, currently being put together, is essential. This should serve as the basic foundation for planning, budgeting and investment in the Delta. It will support the optimisation of short-term investment decisions, and consider the long-term and sometimes uncertain impacts on the ecosystem and the need to increase resilience to cope with future pressures.

It is time to rethink development and renew actions to support people’s resilience. The process of identifying challenges and local solutions, planning, budgeting and investing should start with consultation. Dialogue must include stakeholders at all levels, in particular farmers and vulnerable groups. This can help to raise public awareness and mobilise viewpoints to inform decision-making, while ensuring that new transformative models are accepted in society.

Fostering consensus among government agencies, provinces, businesses and citizens is essential for securing the sustainable and climate-resilient development of the Mekong Delta.