There are many reasons why people continue to risk their lives in perilous journeys across the Mediterranean, despite the rising death toll. Environmental factors are significantly contributing to the crisis 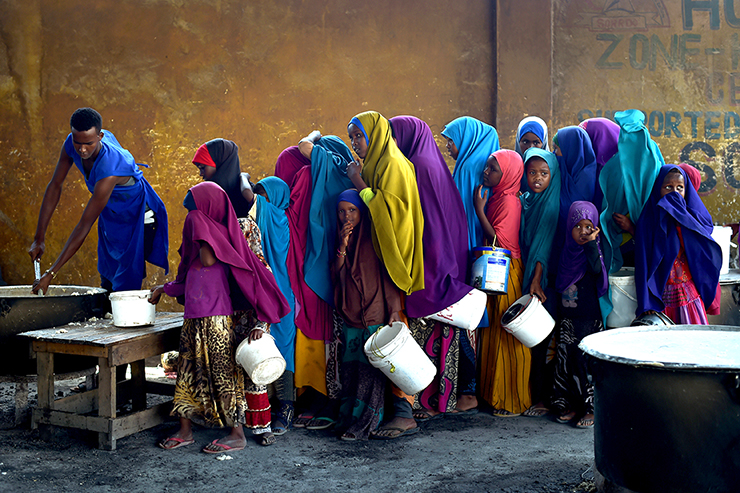 A feeding centre in Mogadishu, Somalia, during the severe drought in 2017  © UN Photo/Tobin Jones

There are many reasons why people continue to risk their lives in perilous journeys across the Mediterranean, despite the rising death toll. Environmental factors are significantly contributing to the crisis

Migration in the Mediterranean hit the headlines in 2015 as Europe faced a sudden influx of migrants fleeing predominantly from the Middle East, sub-Saharan Africa and North West Africa. In 2015 alone, over one million refugees entered Europe. It’s estimated that half of these came from Syria, a fifth from Afghanistan and seven per cent from Iraq, with most of the remaining third heading from sub-Saharan Africa. Since 2015, arrival numbers have dropped significantly but the proportion of those losing their lives while trying to make the crossing has risen dramatically. The Mediterranean remains a major transit point.

Many of those arriving on the shores of Europe are refugees who have fled their homes to escape protracted conflicts in Africa and the Middle East. Others are migrants, who have embarked on this perilous journey for a number of factors, including extreme poverty.

Most cross the Mediterranean by sea via one of its main migratory pathways. The Central Mediterranean Route – one of the most consistently busy and deadly – goes from North Africa (mainly Libya) to Italy. The Western route involves journeys from Morocco to mainland Spain by sea, including land crossings into Spanish enclaves. The Eastern route sees crossings from Turkey to Greece.

Since 2015, individual governments and the EU have spent much time and money on efforts to reduce irregular migration. Some governments have tightened their borders, even closing them temporarily and calling for the EU to do the same.

The EU has spent millions trying to dissuade those making the journeys by funding and supporting countries that act as main points of entry: for example, giving over $200 million to help Sudan stem migration to Europe. It also struck a controversial deal with Turkey in 2016, which led to an immediate, notable drop in migration to Greece.

However, criticism is mounting that these approaches are not only ineffective but are also putting migrants in direct harm. Research suggests that security-based interventions designed to tackle the flow of migrants, refugees and asylum seekers have played a key role in increasing the vulnerability of people on the move. For instance, smuggling and trafficking networks have mushroomed in Libya, as migrants from sub-Saharan and North Africa pass through. Last year, shocking footage emerged of ‘slave’ auctions in the country.

A containment approach to migration disregards the root causes that force people to take such life-threatening journeys. It also ignores the fact that some migrants, notably refugees, have legal pathways open to them under longstanding international agreements, such as the 1951 Refugee Convention.

Without efforts to address root causes, and without an adequate humanitarian response, security-based measures will only lead to more deaths, while smuggling networks will continue to profit from those tragedies at sea. States, European and African, must put the safety of those on the move at the heart of their responses.

The role of climate change
Climate change is making this challenge even more urgent. Despite contributing the least to global greenhouse gas emissions, Africans will be among those who suffer the most. North Africa is one of the hot spots for extreme heat, drought and aridity arising from climate change, with rising temperatures predicted to reduce significantly the amount of arable land, shorten the length of growing seasons and reduce crop yields.

As a region highly dependent on climate-sensitive agriculture, the economic and social conditions in North Africa are likely to deteriorate in the future. Climate change is already placing an extra burden on the abundance of resources, aggravating existing conflicts and reducing the options of people to successfully address these challenges to their livelihoods. The expected decrease in annual precipitation, for example, is likely to hit food supply in areas that rely on irrigation for crop growth, and drive conflict over dwindling water sources.

Even if the world meets the 2ºC target set out in the Paris Agreement, it would do little to stop the region from overheating. A temperature rise of 2°C over the next 80 years could increase desertification, with both the Sahara and Sahel moving south – and people more likely to move out.

The latest Intergovernmental Panel on Climate Change (IPCC) report concludes that a world with 2°C of global warming will lead to more heat-related deaths, reduced crop yields, more extreme weather events, slower economic growth, increased poverty, and more people facing water stress (by up to 50 per cent) than a 1.5°C world – the ‘stretch’ target agreed at Paris. And, predictably, the impacts will get progressively worse if temperatures warm beyond the 2°C limit.

To address this, all states need to rapidly increase the scale and ambition of their nationally determined contributions. Currently, we are on course for a temperature rise of 3.1-3.7°C, with plans in place that would reduce this by about half a degree. We also need to see more support for improving adaptation strategies, including for migration.

Improving responses?
Studies suggest that climate change will drive a huge increase in the number of migrants seeking refuge in Europe if current trends continue. Forcing people to remain in their country of origin is simply not going to work.

Moving forward, climate policy needs to integrate migration concerns and take a comprehensive rights-based approach. For instance, we need to look closely at what resources are needed to support least developed countries, which have fewer resources to put towards adaptation, so that migration is not the only viable option open to people – most of whom will not want to leave their homes. This means ensuring that local voices are heard, so that local needs can be met.

We also need to review existing legal frameworks which are ill-geared to deal with those displaced for environmental reasons. The Global Compact for Safe, Orderly and Regular Migration is a positive step – but it is only the first that we will need to take to tackle the complex root causes of migration, and the responses  they require.

Climate change and its effects will remap our world, altering not just how we live but where we live. If we want to help people avert the need to migrate from their homes, then getting ahead of global climate change trends is critical.