A changing climate, and the associated threat of chronic resource scarcity, brings with it the risk of new conflicts erupting around the world, and of exacerbating current disputes. What can the international community do to prevent climate-related conflict taking root? 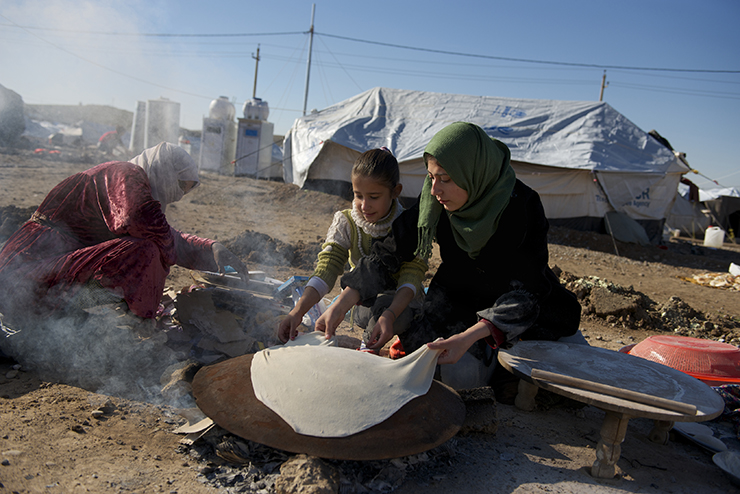 Syrian refugees in the Kawergosk camp, Iraq. Crop failures and food insecurity played a role in triggering the protests that led to civil war.  © UNICEF/Shehzad Noorani

A changing climate, and the associated threat of chronic resource scarcity, brings with it the risk of new conflicts erupting around the world, and of exacerbating current disputes. What can the international community do to prevent climate-related conflict taking root?

By Abiodun Williams , President, The Hague Institute for Global Justice

If climate change was once a topic associated principally with sustainable development, it is now rightly also an issue at the top of the agenda of security planners at both domestic and international level. This can be seen not only in the national security strategies of various states – including the UK, US and Germany – but also in the extent to which discussion of climate change and its attendant effects has permeated high-level political dialogue on matters of international peace and security.

When the UN Security Council held its first debate on the impact of climate change on peace and security in 2007, the official press release noted that ‘some delegations raise[d] doubts regarding Council’s role on [the] issue’. Since then, it has become ever clearer that climate change is a phenomenon intricately connected to the challenge of upholding peace. As such, it is an issue with which the Council will increasingly have to grapple in the future.

The recognition that climate change may provoke new conflicts or exacerbate existing ones is underpinned by the more nuanced understanding of the causes of conflict that has been reflected in scholarship over the past two decades. The human security paradigm that revolutionised thinking about the conflict–development nexus has provided scholars and practitioners with a valuable lens through which to view the effects of climate change on both states and people.

Though the drivers of conflict are often multifarious and interwoven, many of the negative impacts that climate change will have on human livelihoods are relatively straightforward. It is not difficult to imagine how land degradation, chronic droughts and repeated crop failure will erode agricultural production and undermine communities’ economic and food security. However, the secondary effects of these processes may be equally important drivers of social conflict. Infectious disease resulting from malnutrition or water shortage may be less visible but equally powerful determinants of poverty, socio-economic exclusion and, ultimately, conflict.

Displacement induced by natural disasters has risen in recent years, and the effects of climate change are expected to intensify such disasters and accelerate forced migration in upcoming decades. The number of storms, droughts and floods has increased threefold over the last 30 years with devastating effects on vulnerable communities, particularly in the developing world. Over the past five years, an average of nearly 27 million people have been displaced annually by natural hazard-related disasters.

The position of small island developing states is particularly precarious. International law is ill-prepared for thorny questions of citizenship and sovereignty that will arise in the coming decades as some of the world’s existing nation states cease to be viable on current territory.

In short, climate change may exacerbate socio-economic stresses such as loss of arable land, resource scarcities, forced migration and weakening institutions, all of which could make a violent escalation of inter- and intrastate conflicts more likely. In response, government at all levels must address issues of resource scarcity and competition, as well as the trends – such as displacement – that they fuel.

Avoiding harm
Though the need for action is clear, it is also vital to act in a way that abides by a principle of reducing harm, for climate change presents significant collective-action problems. Not only can behaviour by one state (such as increases in carbon emissions) self-evidently imperil global efforts to counter climate challenges, but adaptive action taken by individual governments can often have cross-border effects, albeit (sometimes) unintended. If not carefully managed, these measures, which betray ignorance of potential negative externalities beyond a state’s borders, can become a source of interstate conflict.

Climate change can act as a threat multiplier in paradoxical ways. In some instances, it exacerbates resource scarcity. A salient example comes from Syria, where several UN reports show that from 2006–11, 60 per cent of Syria’s land had to deal with the worst prolonged drought and the heaviest crop failures for thousands of years, prompting a mass migration of farming families to urban centres. This led to extreme food insecurity, which was one of the causes of the 2011 protests that were the prelude to the devastating civil war.

In other instances, climate change brings with it the potential for competitive scrambles over newly accessible resources. A prime example is in the High North, where melting ice caps are revealing vast unexplored stores of hydrocarbons. The Arctic is the archetype for the increasingly complex relationship between security and development. Not only are questions of governance raised about access to oil and gas in the Arctic Sea, but so are ethical issues around the ownership and use of these resources.

Conflict-sensitive climate strategies
What these examples show is that any approach that considers the challenges of climate change or conflict in isolation is likely to fail. Much progress has been made in understanding the relationship between conflict, security and development. In today’s world, no security assessment can be complete with an understanding of the risks and opportunities that a changing climate augurs.

While these trends highlight the need for more scholarship in this nascent field, there are already actions that policymakers can take to mitigate against extant threats. It is a positive step that national defence and foreign ministries are integrating a better understanding of climate change into their own national security strategies. But they must make commensurate efforts to ensure that their international development, conflict prevention and peacebuilding efforts are equally climate sensitive. They must also ensure that their own adaptive strategies do no harm to other states, with a resulting increase – unwittingly or otherwise – in conflict risks.

Climate change is a multi-level challenge. Just as its effects are felt at the level of interstate relations as well as in local communities, so the solutions are to be found in the tribunes of the UN, as well as in adaptive strategies suited to protecting individual livelihoods. And if the challenge is multi-level, the solution is also multi-stakeholder: inculcating conflict-sensitive climate adaptation strategies among businesses and civil society organisations is as important as action by local, nation, regional and international authorities.

The scale of the threat posed by climate change is a daunting one. It carries with it the risks that conflicts will spread, whether inadvertently or as a result of new rivalries. But it also offers – through painstaking diplomacy – opportunities for new forms of cooperation. In that sense, tackling climate change can also offer a path to peace.