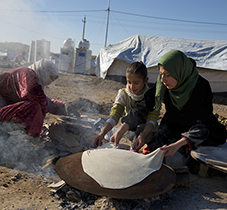 On 17 December 2013 in Iraq, (foreground, left-right) 12-year-old Safaa helps her 16-year-old sister, Marwa, bake ëkhubzí, a type of flat bread, outside their tent in the Kawergosk camp for Syrian refugees, just west of Erbil, capital of Kurdistan Region. The sisters and their family, who fled their home in Syriaís north-eastern Hasakah Governorate, are among nine people sheltering in the tent. They are adjusting as best they can to their new circumstances. ìI can see the desperation on their faces. But all we can do is laugh and smile because this is our life. I see them play, and do things, but at the end of the day theyíre just sad,î Safaa says. ìItís sad but itís not going to stop me.î

As the Syrian crisis enters its fourth year, needs are escalating at an increasingly urgent pace, with children bearing the greatest toll. Since March 2011, over 7,000 children have lost their lives in the violence, while hundreds of thousands have been wounded, some of whom must now live with life-long disabilities caused by their injuries. By mid-December 2013, the conflict had left 6.5 million people displaced internally. They are among 9.3 million people inside the country in need of humanitarian assistance, of whom 46 per cent are children. Fighting has also forced over 2.2 million people to seek refuge abroad. The majority have fled to Egypt (130,524 refugees); Iraq (210,612); Jordan (568,501); Lebanon (787,886); and Turkey (553,281). The decimation of medical facilities, immunization and cold chain systems, and water, sanitation and hygiene infrastructure has jeopardized childrenís health and markedly increased their vulnerability to diseases, which spread with greater ease amid mass population movements. In October 2013, cases of wild poliovirus were identified in the Syrian Arab Republic, where the disease had previously not been detected since 1999. Prolonged exposure to violence and the stress of displacement has also placed childrenís psychosoc