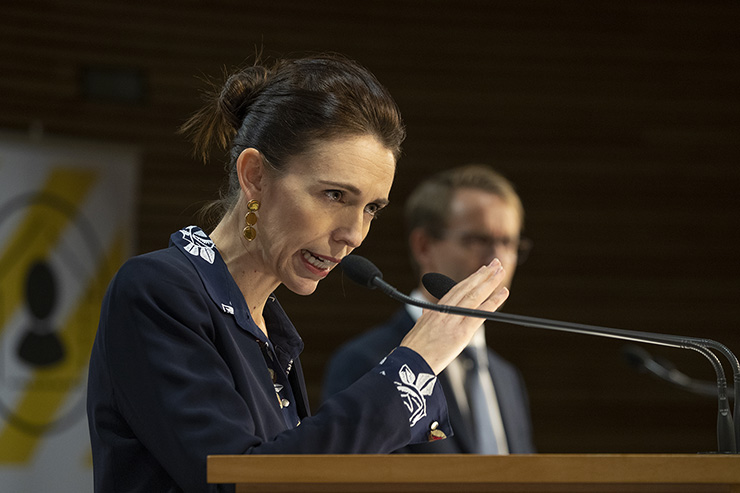 New Zealand’s Prime Minister Jacinda Ardern delivering a COVID-19 briefing. She has won wide praise for the clarity and effectiveness of her communication, and has succeeded in her strategy to suppress the outbreak in the country. © Mark Mitchell-Pool/Getty Images

In October 2019, US Senator Bernie Sanders was fact-checked after he referred to climate change as an “existential threat” during a Democratic debate. FactCheck.org stated: “Scientists agree that climate change does pose a threat to humans and ecosystems, but they do not envision climate change will obliterate all people on the planet.”

Sanders has not been alone in referring to the threat of climate change in these terms. In 2018, UN Secretary-General António Guterres warned: “Climate change is the defining issue of our time – and we are at a defining moment. We face a direct existential threat.” Researchers at the Australian National Centre for Climate Restoration implored policymakers – in their 2018 report What Lies Beneath – to reframe their climate action around the principle that “human-induced climate change represents an immediate and existential threat to humanity”.

The fact checkers were, to an extent, correct in their assessment. Present climate projections and modelling underpinning our understanding and assessment of climate change to the end of this century do not include, for now, our veritable extinction. However, we need to consider what constitutes an ‘existential’ threat. These projections envision catastrophic risks that could lead to the complete destruction of vulnerable communities, entire natural species and ecosystems, and threaten the nature of human civilisation.

At present the global community is gripped by a global health emergency. The COVID-19 pandemic shows us the devastating impacts of a threat that may not be existential, yet demands urgent mitigation to save lives and protect our communities.

The science
The accepted international authority on climate change is the Intergovernmental Panel on Climate Change. The IPCC is a body of the UN tasked with providing comprehensive and objective scientific information on the risks of climate change. The Panel brings together hundreds of experts and stakeholders from across the world.

Since 1990, the IPCC has produced five assessment reports, each one a major review of the latest climate science, and six special reports. Its most recent Fifth Assessment Report, published in 2014, adopted four ‘Representative Concentration Pathways’ (RCPs) – greenhouse gas concentration trajectories for the 21st century – to form the basis of climate modelling and research. Of these pathways, RCP 8.5 projects an increase in global warming to approximately 4°C by 2100. This projection has formed the foundation of the climate change debate as the ‘worst case’ apocalyptic scenario. This is opposed to the ‘best case’ scenario of the 2016 Paris Agreement of warming of 1.5°C – the target to preserve civilisation as we know it.

The worst-case scenarios
A future of 4°C of global warming is a terrifying one. It would see 1.2 to 2.2 million people displaced from the Caribbean, Indian and Pacific oceans, a prospect that the Foreign Minister of the Marshall Islands stated to be “equivalent in our minds to genocide”. Whole ecosystems would be lost, and there would be eight million cases of dengue fever annually in Latin America alone. The global economy would be 30 per cent smaller and would likely have to take a very different form. Civilisation as we know it would be unrecognisable: humans would be forced to migrate as regions became uninhabitable or unfarmable due to droughts, floods or deadly temperatures.

The modelling for this future scenario depends on global consumption of fossil fuels increasing sixfold. This projection seems unlikely, given developments in recent years such as the fall in renewable energy pricing and the decline in coal combustion in the developing world.

Instead, in the World Energy Outlook published at the end of 2019, the International Energy Agency (IEA) projects that if we continue on a likely path of ‘business as usual’, global temperatures will increase by between 2.9°C and 3.4°C. This would still be catastrophic.

According to a report by Carbon Brief, a projection of global warming at this range would see Southern Europe in permanent drought, areas burned by wildfires would increase in the USA sixfold, and damages from river flooding would increase by 30 times in Bangladesh and 60 times in the UK. Life would continue, but not as we know it.

Climate projections are imperfect and necessarily flexible, and the worst-case scenarios may yet be worse than possibly thought. However, what remains evident is that with higher global temperatures, the risk of further warming also increases. Scientists warned in 2018 that this could trigger a ‘hothouse Earth’ – a domino effect of warming with tragic consequences not yet imagined, if the global community does not take action.

The most likely scenario?
With each passing year the Paris Agreement target of 1.5°C of warming becomes increasingly difficult, perhaps even unrealistic according to the United Nations Environment Programme (UNEP) Emissions Gap Report 2019. The recent IEA report instead projects that if countries deliver on their obligations under the Paris Agreement, warming could be limited to 2.7°C to 3°C.

This likely scenario of warming above 2°C may be a world away from the consequences of 4°C of warming, but it is still dramatically worse than the prospects posed by a future of 1.5°C of warming. The IPCC’s 2018 Special Report on Global Warming of 1.5°C, demonstrated that warming of 2°C compared to 1.5°C would:

Warming considerably above 2°C would likely lead to a scenario somewhere between these outcomes and the worst-case outcomes above.

All these projections demonstrate that we are undeniably set for a future where global warming transforms the way we live and our quality of life, and threatens the existence of vulnerable communities and entire ecosystems.

However, the science also shows that these prospects are hugely variable. Changes as seemingly small as 0.5°C can be the difference between a bearable future and one that causes considerable suffering for hundreds of millions of people.

The communication challenge
The focus of messaging on climate change must highlight the capacity that exists for our meaningful and transformational impact on this trajectory, while continuing to stress the urgent need for immediate action.

The current COVID-19 pandemic holds important lessons. It is a threat much like climate change in its impacts but is moving rapidly enough to be more comprehensible to those living through it. It has led to a devastating loss of life, a threat to the global economy, and the suspension of ordinary existence for many. It is a reality that experts warned would come, and is indicative of what the future holds.

It has also served as another stark reminder that although the risks associated with the climate crisis threaten us collectively, the impacts will not affect us equally. The most vulnerable in our communities, the lowest paid and underprivileged already experience the harshest impacts of our changing environment. For these groups of our global community, the climate crisis is not an existential threat of the future, but of today.

COVID-19 also shows us how a threat that is not existential – in the sense that it has no power to wipe out the human race entirely, or even in considerable proportion – can still be absolutely devastating, can change our recognition of the nature of our society, and dramatically make life on Earth worse. The threat does not have to be of extinction to be one which should require us to make Herculean efforts to mitigate it – even if that means dramatic changes to our way of life.

In an editorial for UN News in April 2020, the head of UNEP, Inger Andersen, cautioned against misleading rhetoric that certain visible, positive environmental impacts of the pandemic are a ‘silver lining’. Instead, Andersen urged that the vital and urgent takeaway from this catastrophe must be a collective effort to change and propagate the transition to greener, more sustainable habits of production and consumption. We have the power to mitigate and alter the path towards the worst possible future scenarios for our planet.

As we work to inform and transform policy and perspectives on climate change, the core messaging must be that changes to our way of life are inevitable, but we can and must act to avoid the most devastating global future.
Climate science shows we still have a role to play in determining just how extreme the changes in our future world will be. We can and must act to save hundreds of millions of human lives, prevent entire natural species from being wiped from the face of the planet, and to preserve the best characteristics of the civilisation we know today.