Developing climate-resilient communities and infrastructure is a crucial element of any climate change solution. Agreeing how to finance this will be one of the year’s key decisions 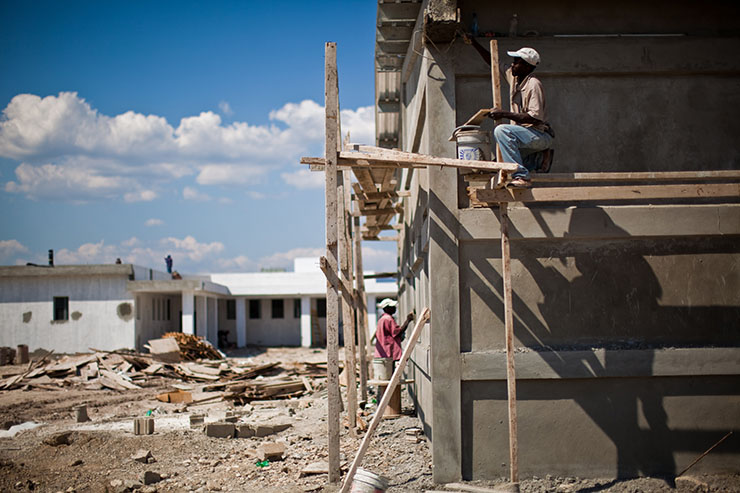 Building the Mirebalais National Teaching Hospital in Haiti, a completely solar-powered, state-of-the-art hospital provided by the non-profit organisation Partners in Health and its supporters.  © Zbigniew Bzdak/Chicago Tribune/MCT via Getty Images

Developing climate-resilient communities and infrastructure is a crucial element of any climate change solution. Agreeing how to finance this will be one of the year’s key decisions

At the World Bank Group, our twin goals – ending poverty and boosting shared prosperity – are the priorities that orient our actions every day. Climate change is not just an environmental challenge. It is a fundamental threat to our ability to achieve these development goals.

The evidence is clear: climate change compounds risks and challenges across a majority of sectors critical to sustainable, inclusive economic development. Even with very ambitious mitigation action, warming close to 1.5°C above pre-industrial levels by mid-century is already locked in to the Earth’s atmospheric system and climate change impacts such as extreme heat events may now be unavoidable.

Rising temperatures mean more extreme weather that puts lives and property at risk. These changes increase the vulnerability of the poor to famine, drought and disease. That’s why if you care about development, you have to care about climate change.

Good development is resilient development
We know that the impacts of climate change will hit the poorest and most vulnerable the hardest. From 1980 to 2012, global disaster-related losses amounted to $3,800 billion. Weather extremes from 18,200 events caused 87 per cent of reported disasters, 74 per cent of losses equalling $2,800 billion, and 1.4 million or 61 per cent of lives lost. Recent studies show that communities facing the highest future poverty risk have the lowest capacity in climate risk preparedness.¹

Enhancing resilience – the ability to resist, cope with and recover from shocks – can reduce the impact of disasters. Climate and disaster resilience should therefore  be an integral part of national policies and development assistance, particularly in the poorest and most vulnerable countries.

Coastal communities and small island states in particular are already feeling the impact of climate change. Almost half a billion people live in coastal areas, vulnerable to storm surges and sea-level rise. A recent study estimated that the world’s 136 largest cities – in developed and developing countries – could be facing annual flood losses of $1 trillion by 2050, if cities don’t take steps to adapt.

Yet, support for disaster preparedness and prevention remains low. Over the past two decades, the international community has committed $106.7 billion to disaster aid. Of these resources, $69.9 billion was spent on disaster response and $23.3 billion on reconstruction and rehabilitation. Just $13.5 billion went to risk-reduction measures before the onset of disasters.

Adapting to climate change and building resilience may have an upfront investment cost. But, if well designed, prevention and preparedness can be more cost-effective in the long run than disaster relief.² Early warning systems are among the most cost-effective solutions. Every $1 invested in early warning systems can provide as much as $36 in economic benefits and save countless lives.

Financing for development
With the Financing for Development Conference in Addis Ababa and the Paris climate conference rapidly approaching, we need to establish clearly how we will finance development in a world shaped by climate change. At the same time, we will need to finance the incremental costs of low-carbon growth and development that is resilient.

Let’s be clear about the scale of the challenge before us: the finance required for an orderly transformation to a growing low-carbon and resilient economy is counted in the trillions, not billions. The decisions we make this year on how to use scarce public resources and leverage financing and action from others will lay the foundation for action for decades to come. In the period to 2030, the global economy will require $89 trillion in infrastructure investment across cities, energy and land-use systems and $4.1 trillion in incremental investments for the low-carbon transition required.³

At the same time, we need to find pathways to the annual $100 billion of public and private financing by 2020, promised at the UN climate conference in Copenhagen, that will support climate action. We believe that there are different pathways we could take. Many analyses show that much of that $100 billion, under the most conservative estimates, is already flowing and that multilateral development banks and other development finance organisations play a critical role in that flow and in leveraging private finance. While there has been progress, including the $10 billion in pledges to the Green Climate Fund, more is needed.

The World Bank Group currently commits around $11 billion a year to climate action. We believe that with the support of our shareholders, we could do more in the future. We are exploring ways to increase our financing capacity and investments in adaptation. If multilateral development banks and other development finance institutions were to take similar steps we could make a significant contribution to mobilising needed finance.

With current low oil prices there is an opportunity to do more. Governments can phase out harmful fossil fuel subsidies and, in developed countries, consider redirecting a portion of the revenue towards climate action in developing countries.

This could be complemented with steps to put a price on carbon – through taxation, markets or other instruments. Carbon pricing will help reduce emissions, encourage low-carbon growth and unlock much-needed financing. Pricing carbon through a carbon tax or carbon market mechanism can raise revenue while also encouraging emissions reductions. A $25 per tonne price on carbon dioxide emissions could mobilise $25 billion to $50 billion a year if developed countries allocated a small portion of carbon pricing revenues for developing countries.4 And we need to build on the rapid growth in the green bond market, including greater use of local-currency green bonds and asset-backed bonds in emerging markets.

Climate-smart planning for the future
The good news is that climate action does not require economic sacrifice. Smart policy choices can deliver economic, health and climate benefits. For example, the soot from open cooking fires, still common in parts of Asia and Africa, contributes to 4.3 million deaths from air pollution in developing countries every year – and to climate change, particularly the melting of snow and glaciers. Clean cookstoves that reduce soot are a simple but effective way to clean up indoor air, reduce respiratory illnesses, save lives and reduce a driver of climate change. We’re working with a new partnership to deploy 100 million clean cookstoves by 2020.

A lot of climate action is common sense and necessary for development – like public transit. Our Adding up the Benefits report showed how policies promoting clean transportation and energy efficiency in industries and buildings will also lead to global growth. For example, if India built 1,000 km of new bus rapid-transit lanes, over 20 years that could save more than 27,000 lives by reducing air pollution and accidents and create more than 128,000 jobs. It could also reduce greenhouse gas emissions by about 42 million tonnes.

We live in a rapidly urbanising world. Just over half the global population is urban today. By 2050, cities are expected to hold two-thirds of the world population. That’s 2.5 billion more urban residents that the world’s cities will need to support in the very near future.

Cities are a big part of the solution to meet the climate challenge, as they account for roughly two-thirds of the world’s overall energy consumption and 80 per cent of the global greenhouse gas emissions. We need to act now, because once a city sprawls and its shape is determined, it is difficult to undo, with negative impacts for low-carbon growth.

In the next 20 years, we will build more infrastructure than we have built in the past 6,000 years. We have an opportunity to ensure these unprecedented development efforts are low-carbon and resilient. Infrastructure needs to be built and jobs created in a climate-smart context. We can choose to develop low-carbon energy sources like geothermal, solar and wind; build smart cities; and develop clean transportation. And we can and must act now, because it will be far cheaper and less disruptive than what we face if we delay.

4. Estimate by the Advisory Group on Climate Change Financing convened by the UN Secretary-General in 2010.