South Australia’s state capital Adelaide intends to be one of the world’s first carbon-neutral cities, an ambition built on several decades of sustainability focus 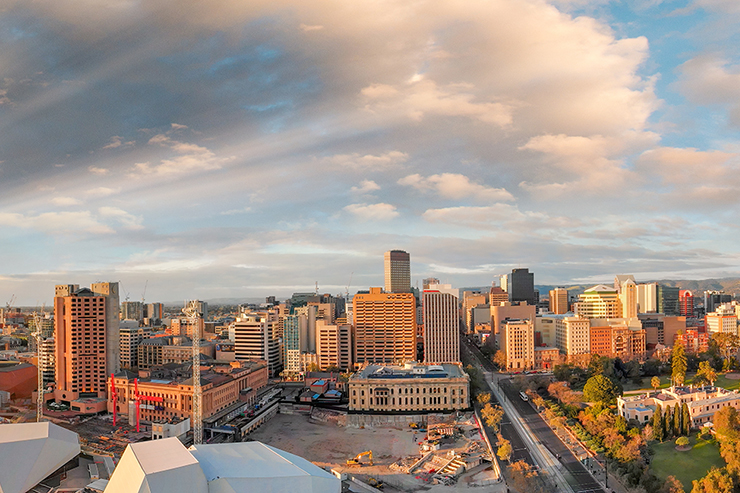 Adelaide, the capital of the state of South Australia, has set itself the ambitious net-zero target date of 2025. © Paola Giannoni/Getty Images

South Australia’s state capital Adelaide intends to be one of the world’s first carbon-neutral cities, an ambition built on several decades of sustainability focus

The City of Adelaide recognises that sub-national government and local municipalities are at the front line of dealing with climate change. We must take decisive actions to both reduce greenhouse gas (GHG) emissions and adapt to a changing climate.

The unprecedented bushfire disasters across Australia in summer 2019–20 are a stark reminder of the reality that governments, businesses and community members must address in a changing climate.

Adelaide’s greater metropolitan area is home to 75 per cent of South Australia’s population of 1.7 million people. The City of Adelaide Council takes the threats and impacts of climate change on our society seriously. It’s a journey that our city and community has been on for the last 25 years. We are responding by making substantial reductions in GHG emissions (mitigation) and helping prepare for and respond to the changing climate (adaptation).

The City of Adelaide began measuring and managing our carbon emissions in 1995 through our participation in the Cities for Climate Protection programme. We set a target to be a carbon-neutral corporation in 2008.

The role of government, at all levels, is to use the policy levers at their disposal to support and effect change within their jurisdiction. Enabling policy has led to significant private investment in renewable energy. In South Australia, policy at the state-government level in 2002, paired with the federal government’s renewable energy target, has led to significant ongoing investment in large wind-energy projects, and more recently solar and energy storage.

In 2018, 53 per cent of South Australia’s electricity came from renewable sources. Our state government has reaffirmed its goal of net 100 per cent renewable energy by 2030. As of October 2019, AUD 21.5 billion of new large-scale renewable energy projects are in the pipeline in South Australia. At the end of November 2019, the City of Adelaide had 10.63 MW of solar installed from 1,376 small-scale residential and business systems.

The city council is leading by example and investing in its own operations becoming carbon neutral. We recently signed a long-term electricity supply contract for all our operations to be supplied with 100 per cent renewable electricity. This contract will eliminate 11,000 tonnes of emissions each year, which equates to taking roughly 3,500 cars off the road. In addition, the contract will deliver a 20 per cent reduction in electricity costs to our budget – freeing up funds to be spent on other services for our residents and ratepayers.

An argument used for decades in order to avoid taking climate action has been to highlight perceived negative impacts on the economy. However, South Australia and Adelaide are a beacon to the world that it is possible to decouple emissions from growth, while benefiting from the growth of the low-carbon economy.

Strong track record
Our track record on sustainability has led to the council fostering an internationally regarded working relationship with the state government. The Carbon Neutral Adelaide Action Plan is a community-owned vision for Adelaide to become one of the world’s first carbon-neutral cities. The state government has a goal for South Australia to generate net-zero emissions by 2050. The action plan identifies and tracks numerous initiatives to achieve carbon neutrality as a city.

While electricity emissions are dropping across South Australia, within the city of Adelaide, transport emissions grew 27 per cent, natural gas by 20 per cent and waste by 6 per cent. These areas must become a renewed focus of government action, particularly from the state and federal levels, which hold the main policy levers for these sectors.

Nonetheless, the City of Adelaide is a firm believer in the philosophy that cities must measure what they manage. In 2019, Adelaide scored a top ‘A grade’ from CDP for the climate adaptation and mitigation work that our city is implementing. At the time of writing, 10 cities in south east Asia and Oceania and 105 cities globally have achieved this score.

Since 2008, the City of Adelaide has allocated at least 1 per cent of its rates revenue to climate change action – with more than AUD 2 million allocated in the 2019–20 budget. While this may not be considered an overwhelming figure, the city’s approach is to leverage public spending to grow private investment. We also have a long-held commitment to reducing GHG emissions.

We are supporting businesses and residents to reduce their emissions through several programmes and incentives. Our Sustainability Incentives Scheme provides a range of rebates that build on the City of Adelaide’s reputation of national firsts in supporting community investment in sustainable technologies. The scheme positions Adelaide at the forefront of technology and trends for low-carbon living. More than AUD 1 million of incentive funds have leveraged more than AUD 8.4 million in economic output for over 500 projects. The scheme has returned a ratio of AUD 8.15 for each dollar that the city has invested.

Our Solar Savers Adelaide programme has delivered the installation of solar photovoltaic (PV) energy systems on eligible low-income and residential rental properties in the city. In late 2017/early 2018, around 2 kW of PV was installed on each of the 40 properties in the scheme. The Council is recovering the costs of the system from participating property owners through a separate council rate charge paid over 10 years.

The City of Adelaide is also leading the way for electric vehicles (EVs). In partnership with the state government, Adelaide has installed a city-wide network of 42 publicly available EV on-street and off-street charging stations.

As part of setting the carbon-neutral goal, we established the Carbon Neutral Adelaide Partners network with an initial 40 members. Over the past two years, it has grown to more than 175 members representing businesses, not-for-profits and research institutions, all committed to reducing emissions.

While we are well along the journey towards climate action, we also recognise that this is a shared responsibility. From residents, visitors and businesses all the way to state and national government, shared commitment and actions are required to reach net-zero emissions as a community, especially with respect to low emissions transport, energy and waste management.