As people around the world live increasingly urban lives, cities will be at the forefront of any long-term climate solution 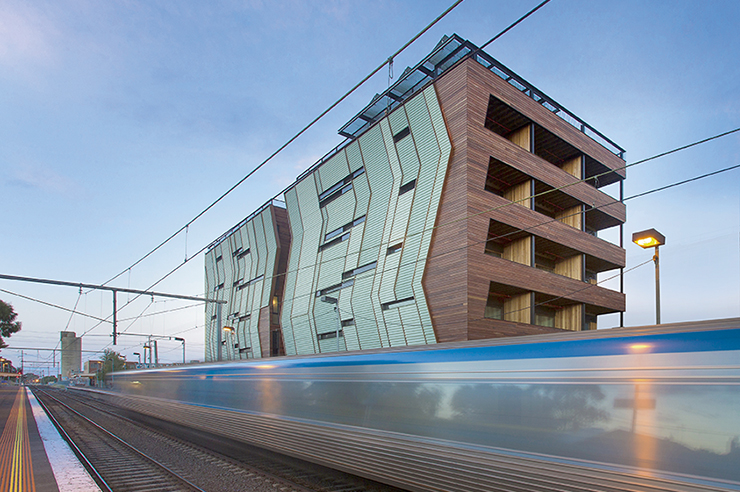 The award-winning ‘The Commons’ sustainable and affordable apartments in Melbourne, Australia. The development model is now being replicated in the city.   © Andrew Wuttke/Breathe Architecture

As people around the world live increasingly urban lives, cities will be at the forefront of any long-term climate solution

The international community understands that to devise a collective and effective response to climate change, we should look at cities. Urbanisation is a powerful accelerator of growth and prosperity.

But cities also consume 78 per cent of the world’s energy and emit a substantial portion of the planet’s greenhouse gases (GHGs) that are brought about by human activity. With this in mind, cities are increasingly devising strategies and taking action to curb their emissions.

Indeed, as the global community prepares for the Third UN Conference on Housing and Sustainable Urban Development, Habitat III, the theme of low-emission development is emerging strongly in the New Urban Agenda (Habitat III’s proposed outcome document). There is a consensus among world leaders in favour of environmentally sound and resilient cities and human settlements, and the mitigation of emissions from GHGs.

Nations agree that we need national, subnational and local climate action that is consistent with the objective of the Paris Agreement on climate change: to hold the increase in the global average temperature to well below 2°C above pre-industrial levels, with an aspiration to limit the temperature increase to 1.5°C.

As the world begins to rally around this New Urban Agenda, it is helpful to see how those cities that are taking the 2°C or 1.5°C targets seriously are going about cutting their emissions.

A recent review of major reporting platforms reveals that 72 cities have publicly committed to reduce their GHG emissions by 80 per cent or more from a base year. While this list is heavily skewed towards large cities in high-income countries, Puebla City in Mexico represents one secondary city from a middle-income country that has made a commendable commitment to making deep cuts in its emissions – a full 90 per cent reduction by 2050 from its base year.1

A few of these leading cities plan to achieve deep cuts in only a few years: Copenhagen, for example, intends to realise net zero emissions by 2025. However, the vast majority (87 per cent) of these 72 ‘deep-cut’ cities plan to achieve their ambitious targets by 2050. By embracing very long-term planning, they are finding it necessary to upend existing planning practices. They are modifying current approaches, and even developing new tools as they go.

Conventional practice: the 20-year horizon
In conventional planning at the city level, a 20-year horizon for long-term planning is typical. This time frame is also followed in the realm of climate change. Countries’ intended nationally determined contributions (INDCs), the strategies that form the heart of last year’s Paris Agreement, include targets for 2030 or 2035.

The UN Sustainable Development Solutions Network (SDSN), launched by Secretary-General Ban Ki-moon in 2012, has forcefully argued that the 15 to 20-year time horizon embraced by the INDCs is inadequate when it comes to decisively addressing global warming. SDSN economists find that “pursuing the 2°C limit seriously” necessarily involves developing “deep decarbonization pathways to 2050”.2

They observe that focusing exclusively on a 2030 target could be “an effective dead end”, in that it could lock an economy in to ‘bridging’ approaches such as over-reliance on natural gas or developing more efficient internal combustion engines. Such technologies “leave insufficient prospects for reaching deep decarbonization by 2050”, leading the authors to conclude that a “timeframe to 2030 is… much too short to ensure consistency with deep decarbonization by 2050”.

Short-term plans, long-term pathways
The SDSN then goes on to make a recommendation that is as applicable to cities as it is to nations. Policymakers should provide “a framework for ensuring that short-term action is consistent with long-term emission-reduction objectives… Short-term policy measures need to be nested in long-term pathways”.3

Indeed, something very much along those lines is starting to occur in vanguard cities. In 2007, New York City announced its initial target of reducing emissions by 30 per cent by 2030 from a 2005 base year.

Then, in 2013, it published a report on the pathways to make deep carbon reductions, asking whether achieving an 80 per cent reduction by 2050 was feasible.4 Finding the goal to be viable, it then went on to “identify the lowest cost pathways and highest priority near-term actions needed to reach this goal”. The report concluded that reaching the 30 per cent target by 2020 rather than 2030 as originally planned, through accelerated action, was the surest way to “put the City on a trajectory to achieve 80 by 50”. The following year, officials announced a very long-term, deep-cut goal: to reduce emissions by 80 per cent by 2050, from the 2005 base year.

So, to nest shorter-term actions inside very long-term pathways, local planners are seizing on new approaches and modifying the tools already at their disposal. Stockholm, for example, is currently exploring alternative, very long-term, low-carbon pathways via a ‘roadmap’ approach (see box).

Another modified planning practice, embraced by New York City’s 2014 climate plan, involves first setting interim targets to periodically assess progress and ensure that the city is on track to achieve very long-term goals. Then, “if progress does not materialise, the City will enact [new mandatory measures]… to set our buildings on a path towards 80 by 50”.5

Other cities, bumping up against the limits of their individual powers, are lobbying and seeking to coordinate with others to achieve deep cuts. Indeed, cities in the C40 Cities Climate Leadership Group report that “over 75 per cent of the challenges [their] cities face” in addressing climate change “cannot be managed unilaterally”.6 As a result, C40 cities are “partnering and collaborating” – with higher levels of government, other cities and the private sector – to achieve ambitious targets.

Long-term planning: action needed now
City planners are becoming increasingly aware of the urgency of achieving deep cuts in city emissions, and the need to modify tools to provide for very long-term planning to that end.

The Carbon Neutral Cities Alliance embraces just such an approach. This Alliance was born at a June 2014 meeting in Copenhagen of 17 progressive cities from nine countries. The initiative has since published a ‘Framework for Long-Term Deep Carbon Reduction Planning’ that furnishes local leaders determined  to effect deep cuts with tools, tips and  best practices.7

Then, in December 2015, UN-Habitat and 45 endorsing partners came together at the Paris Climate Summit to release the first version of their ‘Guiding Principles for City Climate Action Planning’.8 Partners that have endorsed these guiding principles include: networks of cities (e.g. United Cities and Local Governments, ICLEI – Local Governments for Sustainability, South African Cities Network and the Federation of Canadian Municipalities); individual cities; planners (e.g. American Planning Association); international organisations (e.g. World Bank, Global Environmental Facility, UN Environment Programme and the UN Office for Disaster Risk Reduction); and many others.

Principle number one is “being ambitious”, encouraging cities to at least meet and preferably exceed the targets set for reducing GHG emissions by their respective countries. The second version of the guiding principles may well include expanded guidance on very long-term planning as a means for setting cities on deep-cut pathways. Cities emit a significant proportion of the world’s GHGs, and as the world continues to urbanise, cities’ share of emissions will surely increase.

The prerequisites for low-carbon and resilient cities include sound urban planning, legal frameworks that enable action, and a model of urban finance that can provide for the supply of climate-friendly infrastructures, while promoting a compact and diverse urban structure in which economic prosperity is encouraged. When these three pillars are put in place, the urban model will generate more solutions than problems.

The 2012 budget for Stockholm announced a bold target of becoming free of fossil fuels by 2050. Analysts have reckoned that taking such steps to decarbonise the local economy, along with embracing other measures, could reduce total per capita GHG emissions from 3.4 tonnes in 2009 to 0.4 tonnes in 2050 – an 88 per cent cut.

Following this announcement, in 2014 the city released a ‘Roadmap for a Fossil Fuel-Free Stockholm 2050’. This lays out several alternative pathways, such as seeking to improve the energy efficiency of existing buildings by either 30 or 50 per cent, or emphasising different pillars of the ‘avoid–shift–improve’ paradigm in the transport sector. It further gauges the costs and benefits of those alternatives.

This analysis of alternative pathways is helping to inform the debate on the way forward. In 2015, Stockholm’s City Council adopted the more ambitious goal of becoming free of fossil fuels by 2040 – 10 years earlier than previously planned. A draft strategy to achieve that goal is currently under broad consultation, with a decision expected on or after September 2016.