Despite laudable aims of helping the world’s poorest cope with climate change, the Green Climate Fund has no shortage of critics. What must it do to ensure that its good intentions translate into tangible outcomes? 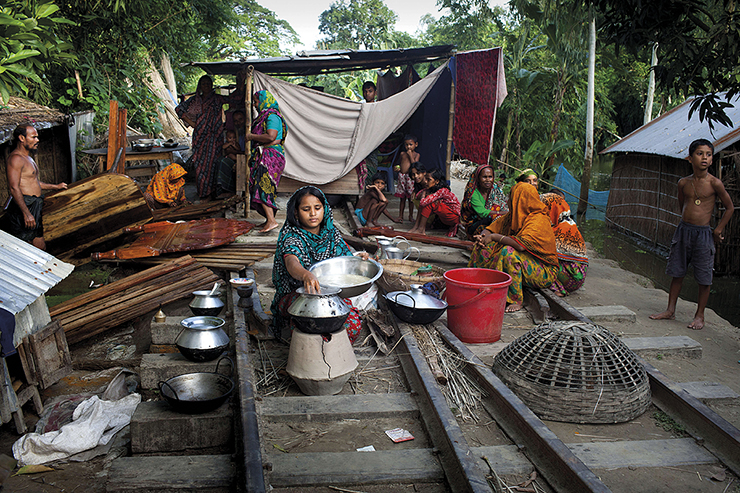 Families take shelter from the floods on a railway track in Kurigram, Bangladesh in July 2016. One of the first Green Climate Fund investments approved in November 2015 was for ‘climate-resilient infrastructure mainstreaming’ in Bangladesh.  © Sue Flood/www.dougallan.com

Despite laudable aims of helping the world’s poorest cope with climate change, the Green Climate Fund has no shortage of critics. What must it do to ensure that its good intentions translate into tangible outcomes?

Following the Paris Agreement on climate change, 2016 has become a pivotal year for a key climate finance institution: the Green Climate Fund  (GCF). Having recently approved a range of new projects, the GCF is making progress. But there are still some fundamental things that need to happen  for it to become more effective.

The GCF was created in 2010 to channel a portion of the billions of dollars that are needed to fight climate change and adapt to its impacts. Shifting public and private investment from ‘brown’ to ‘green’ is an essential part of fighting climate change. Rich countries have pledged to mobilise $100 billion a year by 2020 in funding for poor countries to adapt to climate change and reduce emissions.

The GCF has ambitions to be a fundamental piece of this puzzle. Yet it has taken several years for the South Korea-based fund to actually become operational, and until recently not much money had been disbursed. So the organisation had come under considerable criticism from civil society groups for not providing funding fast enough.

But things are rapidly changing. In the past few months the fund developed more detailed policies to receive, manage and disburse finance. It also named its first ‘accredited entities’ – the institutions that can channel funding to projects and programmes. This year the organisation has also committed to becoming more transparent and to webcast its meetings. And it has resolved to approve projects worth around $2.5 billion in 2016 alone.

Why the Green Climate Fund?
Some observers have wondered why a completely new organisation is needed, as opposed to channelling finance through development banks or existing climate-related funds. But the idea behind the GCF is not to compete with multilateral development banks in financing large infrastructure projects. Instead, the GCF has a climate-specific mandate to finance programmes that mobilise local stakeholders on both mitigation and adaptation.

This is the principle behind ‘enhanced direct access’, a pivotal theme of the GCF. This is a system where both funding decisions and management take place at  the national level in recipient countries. This plan was recently boosted with  $200 million of pilot funding. Implementing this, however, requires broader institutional capacities at national level than are currently available. It also creates the need for an evolution on the part of national planning and focal points in developing countries.

In addition, adaptation and resilience to climate change often takes place at the local level, highlighting the need to improve the links between local communities at the front line of climate change and national planning capacity.

However, many developing countries are not actually ready, or don’t have capacity, to write the proposals to access the funds. This is part of the reason why the proposals approved so far in 2016 represent only a fraction of the $2.5 billion committed for this year.

Division of labour
Of course it also is important to avoid duplication with work done by other climate and development finance institutions. The GCF strategic planning process should focus on enhancing complementarity, effectiveness and efficiency through a division of labour with other institutions and funds.

According to Climate Strategies’ founding member and Managing Director of Oxford Climate Policy Benito Müller, the GCF could act as a kind of “wholesale agent”, with other funding entities working as “specialised retailers”. It is highly likely that there will be a demand for internationally funded micro projects for many years to come. Such projects would need to be catered for by an international division of labour, either through outsourcing or through some form of explicit or implicit understanding between the GCF and other international funders.

And this is precisely what has happened in the approved KawiSafi Ventures Fund project, to be managed by a private-sector company based in Delaware, US, which will approve individual micro investments (up to $10 million) to SMEs in Rwanda and Kenya. Similar programmes could also  be established via public-sector entities,  such as the energy efficiency bond programme approved by the GCF and administered by the Inter-American Development Bank (IDB).

What next?
As hard as it is to ensure the $100 billion-a-year commitment is honoured, this is actually a small portion of the overall climate finance required to limit global warming to no more than 2°C above pre-industrial temperatures, which is in the scale of trillions rather than billions. The World Resources Institute says that by 2020, about $5.7 trillion will need to be invested annually in green infrastructure, much of it in the developing world. To put that figure in context, the International Energy Agency estimates that subsidies to fossil fuels amounted to around $544 billion in 2012.

So there are many who wonder whether the GCF will really tackle areas that other finance won’t reach – and whether it can manage to become a catalyst for other, much bigger finance flows, according to its aims for transformative delivery of climate finance. To support such a climate finance transformation, the fund should be able to take on risks that other funds or institutions are not able or willing to take.

As a next step, the GCF should work hard on integrating risk-mitigation instruments to maximise private-sector leverage. The board recently decided to adopt interim risk and investment guidelines that are meant to help attract proposals capable of higher leverage ratios and higher impact. The energy efficiency bond mentioned above – which allows the IDB to bundle small and medium demand-side energy-efficiency projects throughout Latin America and the Caribbean and issue a partially guaranteed bond to private investors – is a good example of this approach.

The application process and readiness requirements should also be simplified to improve access to financing for developing countries. Some countries lack the capacity to develop strong proposals to align with the GCF investment framework. The GCF has a readiness support programme to strengthen engagement with the least developed countries and support their preparatory activities.

Finally, if through these new proposals and a streamlined application process the GCF managed to scale up disbursement significantly, this could improve confidence in its operational capacity and function. The GCF, as a financial instrument of the UN Framework Convention on Climate Change, has been bogged down by balancing competing interests and consensus-based decision-making. If the GCF Board and Secretariat were able to find an efficient model of operation as they scale up in staff and financial distribution, this would greatly enhance the fund’s credibility as a key piece of the puzzle to mobilise much-needed funding to implement the Paris Agreement.