With demand for transport ever rising, and fossil-fuel engines still dominant, the sector needs to undergo a fundamental transformation if the global warming targets set in Paris are to be met 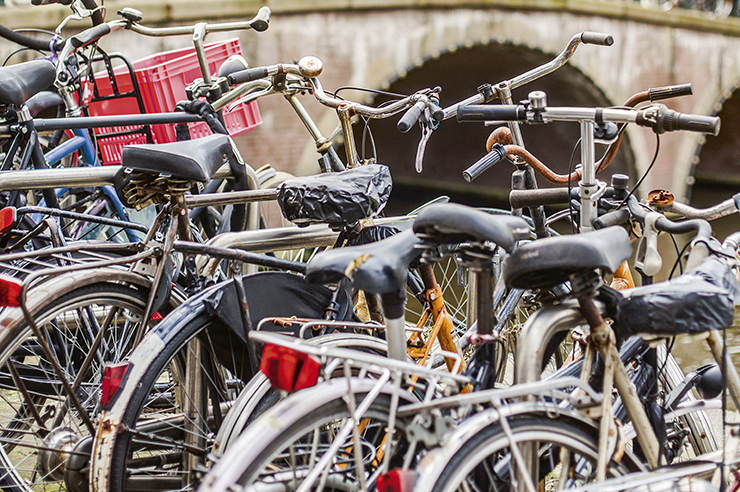 The transport of choice, Amsterdam, Holland. Sustainable transport in cities will require a shift  to walking and cycling.  © Peeter Viisimaa

With demand for transport ever rising, and fossil-fuel engines still dominant, the sector needs to undergo a fundamental transformation if the global warming targets set in Paris are to be met

The 2015 Paris Agreement set a clear target for reducing greenhouse gas (GHG) emissions, by agreeing to limit the increase in the global average temperature to “well below 2°C above pre-industrial levels” and to pursue efforts to limit the increase to 1.5°C, recognising that this would “significantly reduce the risks and impacts of climate change”.

With transport carbon emissions still rising and travel demand expected to double in some transport sub-sectors, over the next decades up to 2050, a mere evolution of current transport policies will not be enough. Limiting climate change to 1.5°C means nothing short of decarbonising transport soon after 2050 in the most advanced regions (by 2070 in some other parts of the world).

The Partnership on Sustainable, Low Carbon Transport (SLoCaT) and its partners are committed to supporting the implementation of the Paris Agreement in the transport sector. Working with Michelin Challenge Bibendum, SLoCaT has created the Paris Process on Mobility and Climate (PPMC) to mobilise action on transport and climate change. A key part of the PPMC follow-up strategy is the development of a global roadmap for decarbonising the transport sector.

The transport challenge
Transport currently accounts for about 14 per cent of global anthropogenic GHG emissions. Demographic, behavioural, business and technology-driven trends are driving large increases in transport demand, in a sector currently still 98 per cent dependent on fossil fuels. An additional 2.3 billion people are expected to live in cities by 2050, placing further pressure on urban transport systems, and creating an explosion in urban passenger trips and freight deliveries.

At the same time there are still about one billion people living in rural areas that do not have access to an all-season road. Improving access for both urban and rural populations are targets in the Sustainable Development Goals (SDGs), agreed by the UN in 2015. Because of this growing demand for transport, emissions could double by 2050. Since transport infrastructure-related decisions ‘lock in’ transport demand for decades to come, public policy in the next few years will determine whether we are set on course for a high- or low-carbon transport future, especially in rapidly motorising countries.

Tackling climate change is not the only challenge facing transport. Roadway congestion undermines the efficiency of, and quality of life in, urban areas. Road collisions kill 1.3 million people every year, and air pollution from motor vehicles kills even more. We also need transport to be more accessible and affordable, as often those people in greatest need of access to jobs and services can’t afford a bike or bus fare. These developmental objectives, in addition to the climate-change challenge, are also part of the SDGs and associated targets.

Linking policy, behaviour and technology
New technological improvements such as electric or hybrid vehicles and ride-sharing apps attract deserved attention, yet by themselves will be insufficient to ensure that transport does its bit towards achieving the 1.5°C target.

In short, the transport community needs to embrace an ‘avoid–shift–improve’ framework to create a balanced set of transport options to reduce emissions and maximise development benefits.

Price signals also influence behaviour, so transport-related prices should reflect external costs (from pollution, noise, accidents etc.) and thus encourage travel choices that benefit society as a whole. Regulatory strategies, such as targeted road pricing as well as a general carbon tax, can simultaneously reduce car use dominance, stimulate private investments in clean vehicles and fund improvements in public transport. Fuel subsidies that are still in place in many parts of the world, meanwhile, hinder the transition to low-carbon transport and should be phased out.

A roadmap for transforming transport
To guide the transformation towards low-carbon and sustainable transport, we need a broad consensus on a comprehensive global roadmap that links policy, investment and behaviour, as well as technology, in a coordinated manner. The aim of such a roadmap is to put transport onto a path to decarbonisation early in the second half of the century. The transformation of the transport sector will be greatly aided by implementing a series of ‘quick-win’  actions to kick-start progress towards a longer-term shift.

There is already broad consensus on the need, in cities, for passenger transport systems based on more walking, more cycling, more efficient public transport and shared-mobility solutions to support sustainable development and climate-change goals. Likewise, there is agreement on the need for appropriate pricing structures for transport. In all of these areas, quick-win actions can and should be deployed.

There has been less attention given to freight transport, although improved efficiency in logistics systems can reduce demand and help shift high-carbon road freight solutions to less emitting solutions, including rail and water transport. The dominance of the freight sector by commercial actors means that if regulations and price signals are correct, the sector will rapidly adopt new solutions.

A successful development of a common global roadmap for the transport sector will require close coordination with other sectors. The growing importance of non-traditional fuels like electricity – and, in the future, possibly hydrogen – calls for close coordination with the energy sector. A better linkage of transport planning with urban planning, resulting in more compact cities, is critical in lowering the need for transport among the rapidly growing urban population in the world.

Effective action on transport and climate change, and therefore also the global roadmap, needs to balance action on land transport, which falls under the United Nations Framework Convention on Climate Change (UNFCCC), with action on international shipping and aviation, which is regulated by two UN specialised agencies, the International Maritime Organization and International Civil Aviation Organization respectively.

The global roadmap will include a series of actions to guide policy, behaviour and technology. These are global in nature,  but the manner in which they are deployed will be dependent on local circumstances, and thus the roadmap must be flexible enough to reflect different conditions in more-developed, emerging and least-developed countries.

From Paris to Marrakech
The Paris Agreement brings to an end a long period of uncertainty about climate action, and there is now widespread interest across the transport sector to step up implementation. Fortunately, we know what needs to be done, as there are many examples of safe, clean, efficient and affordable transport solutions supporting sustainable development for all (including disadvantaged groups such as the young, the elderly and people with disabilities).

The challenge now is to scale up these efforts with comprehensive, concerted action on a global scale. If governments are serious about delivering on the Paris Agreement, they need to break with the past and adopt innovative policies to deliver transformational change.

The global transport decarbonisation roadmap, under development by the PPMC, in the aftermath of Paris for initial presentation at the next UNFCCC conference in Marrakech, can help to focus the efforts of governments and non-state actors alike to achieve the transformational changes needed to put the transport  sector on the right track to help reach a 1.5°C destination.