The Paris Agreement may be a compact among nations, but more than any international treaty before, its success will hinge on its mobilisation of society at large 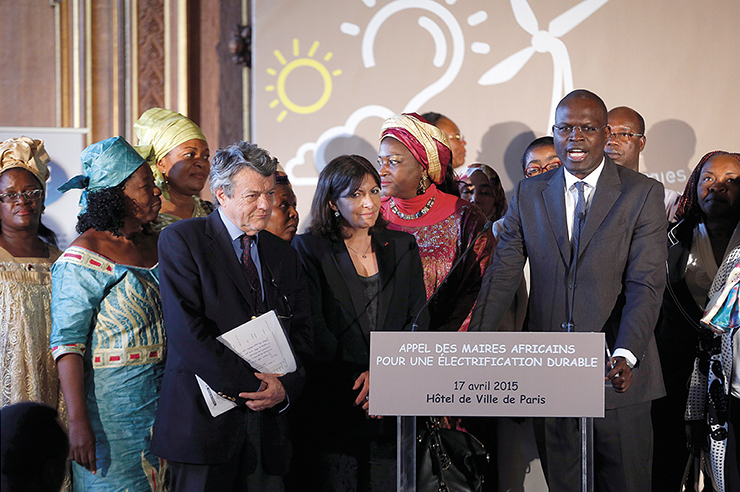 Dakar Mayor Khalifa Ababacar Sall addresses an event for renewable electricity in Africa ahead of  COP21. The way ‘non-state actors’ connected with the COP21 process should add speed and momentum  to the implementation of the Paris Agreement.  © Francois Guillot/AFP/Getty Images

The Paris Agreement may be a compact among nations, but more than any international treaty before, its success will hinge on its mobilisation of society at large

Even before the landmark Paris Agreement has formally become international law, it’s clear that the signals sounded in Paris are reverberating with many of the real-world decision-makers who ultimately must deliver on its promise.

From investors like Warren Buffett to CEOs of top global companies to the mayors of many of the world’s largest cities, Paris is resounding as an unprecedented call to action. This ‘signalling effect’ is penetrating all levels of society, and may ultimately prove as decisive as the actions of national governments in determining the agreement’s success.

The Paris moment, and the ground-breaking agreement it forged, can accelerate the low-carbon transition in three different ways. The most direct is through the implementation of the intended nationally determined contributions (INDCs) that countries pledged in Paris. These lay out the country-specific goals and policies that will define national responses to the global climate challenge in the decade after 2020.

The Paris Agreement itself will drive further action through multilateral norms and mechanisms to promote international accountability and ambition. Stronger transparency rules, and the obligation to offer a new contribution every five years, will strengthen confidence that all countries are doing their fair share. This, in turn, can open political space for each to do more.

But the most immediate – if least direct – impact of the Paris Agreement is the internalisation by influential decision-makers of the imperative of a low-carbon transition. Among global challenges, climate change is unprecedented in the way it permeates virtually every facet of the global economy. It follows that an effective response demands action not just by national governments but at every level, from the local to the global, in both the public and the private spheres.

Action by cities, provinces and companies has been strengthening for some time. But these ‘non-state actors’ have remained largely disconnected from the UN Framework Convention on Climate Change (UNFCCC) – the central forum established by national governments nearly a quarter of a century ago to guide the global response.

That changed in Paris. With strong encouragement from the French conference hosts, thousands of mayors, governors, corporate chiefs and other leaders came to the UNFCCC meeting carrying their own commitments. Paris became a catalytic moment yielding an unprecedented showing of action at all levels.

Even more telling are the many ways in which the signals sounded in Paris continue to resound. Among many investors, Berkshire Hathaway CEO Warren Buffett’s annual letter to shareholders is greeted as a near-oracular event. In his letter this year, Buffett cited Paris as a further impetus for the multibillion-dollar investments that have made his company one of the largest generators of clean power in the US.

Larry Fink, CEO of BlackRock, the world’s largest manager of assets (worth some $4.6 trillion), similarly highlighted the Paris Agreement in a letter urging the CEOs of S&P 500 companies to focus more on long-term value creation and less on short-term gains.

There have also been some other encouraging signs since Paris: A dozen companies, including Bloomberg, HP and Tata Motors joined an existing group of 58 others, including Google, Nestlé and Coca-Cola, in committing to move to 100 per cent renewable energy.

In May, declaring Paris a “watershed” moment, Total CEO Patrick Pouyanné said the French oil giant will base future investment decisions on a 2°C scenario, pulling back from investments in tar sands and the Arctic, and shifting its portfolio towards renewables.

Banks including JPMorgan Chase and Goldman Sachs established new lending practices or new funds favouring clean energy over fossil fuels. And a consortium of financial institutions and investors are partnering under the Catalytic Finance Initiative, originally launched by Bank of America, to direct $8 billion towards sustainable investments.

In a move bound to ripple across many sectors, the Moody’s credit rating agency announced in June that it was building countries’ Paris pledges into the baseline scenario it uses to rate public and private-sector investments.

Mayors also are reading Paris as a cue for stronger climate action. In June, two groups merged to form the Global Covenant of Mayors for Climate & Energy, comprised of the leaders of more than 7,000 cities, large and small, in 119 countries. The mayors pledged to set goals going further than their countries’ respective national commitments.

To strengthen the rigour and credibility of their contributions, the mayors’ group and others are establishing methodologies to track actions and measure their emissions impact. A loose network of non-state constituencies have begun planning their own summit to showcase their efforts in mid-2018, as national governments prepare to take stock of global progress.

That the signals from Paris are being so widely received – and amplified – reflects a dramatic evolution in the global climate effort. The multilateral struggles of national governments may still occupy centre stage, but the annual UN climate conferences are becoming more inclusive affairs, welcoming and capitalising on the energies of other influential players.

This activation of investors and multinational companies, and of elected leaders responsible for the everyday concerns of millions around the globe, will likely be a key component of Paris’s success.

Leading up to Paris, the surge of commitments by non-state actors helped embolden governments to offer up ambitious INDCs. In the years ahead, it will in many countries fall to business and to subnational leaders, as much as to national governments, to ensure that these national contributions are fulfilled.
Indeed, over the long haul, the more deeply the Paris goals are embedded in corporate and subnational decision-making, the better they will withstand the political and economic currents that may distract national leaders from the imperative of the low-carbon transition.

At the next UNFCCC conference in Marrakech, parties may look at ways to strengthen the engagement of non-state actors going forward. They could, for instance, play a role in the ‘global stocktake’ that will take place every five years. Or governments could grant permanent status to the Non-State Actor Zone for Climate Action (NAZCA) portal, an online registry launched before Paris that now contains commitments from more than 11,000 cities, regions, companies, investors and civil-society organisations.

But more important than any formal role for mayors and CEOs in the UN process  is the continued uptake of the signals Paris is sending.