After three decades of rapid growth in Asia, driven by cheap fossil fuels, sustainable options are the most promising for those still without access to energy 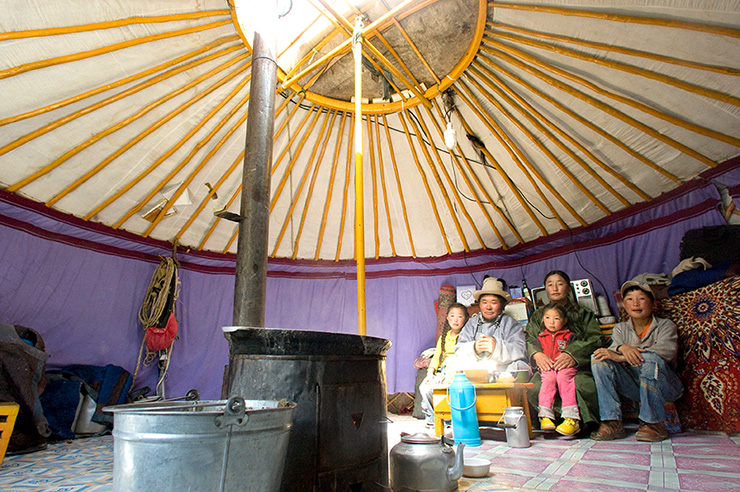 A herder family in Must, Mongolia. Their ger, a traditional Mongolian tent, is powered by solar panels. Small off-grid solutions are often the simplest and most practical way to address energy poverty © UN Photo/Eskinder Debebe

After three decades of rapid growth in Asia, driven by cheap fossil fuels, sustainable options are the most promising for those still without access to energy

The power system in any country is one of its most complex, expensive and sophisticated set of assets. It provides electricity ‘just in time’ at the flick of a switch to millions of homes, offices, industrial and commercial complexes, and many other essential services. Reliable electricity is the backbone of any modern economy – and essential for the wellbeing of people.

Power systems across most developing countries in Asia grew in line with rapid economic growth over the last three decades. However, this growth was fuelled by burning cheap and abundant fossil fuels: coal and, to a lesser extent, natural gas. This has led to widespread air quality issues and large increases in carbon dioxide emissions. Considering that the power sector accounts for about a third of emissions, its critical role in addressing these issues cannot be emphasised enough.

Looking ahead, Asia is projected to double its current power system capacity by 2030. While this may be achievable, it raises serious questions about climate change and sustainability. Unless we deal with these issues properly, such rapid expansion could have serious consequences in many developing countries across the region.

So, what are the major issues?

In developing Asia, more than three quarters of electricity is generated from fossil fuels. Continuing on this path is environmentally unsustainable and is directly at odds with the Paris Agreement. Despite significant progress on renewable energy in large countries like China and India, coal and natural gas continue to be the fuels of choice in the region. Prices are kept artificially low through enormous subsidies. The economic burden of air pollution and climate change is often ignored in investment decisions.

Since 2000, there have been impressive efforts across the region, bringing electricity to 170 million previously unconnected people. However, these services are often inadequate and of poor quality, and nearly 400 million people remain without access to electricity. The looming energy poverty in the region is a serious risk to achieving the 2030 Sustainable Development Goals (SDGs), in particular SDG 7: to ensure access to affordable, reliable, sustainable and modern energy for all. The typical response from the power utilities has been to focus all their efforts on extending the grid to unserved areas; a strategy that has not worked well. The potential of renewable energy-based, off-grid solutions have largely been neglected.

Public-sector control of power assets has created many large state-owned enterprises (SOEs) that are prone to government interference and often compelled to compromise commercial interests. This has often resulted in: a) inefficient and poorly managed SOEs with no competition; b) significant technical and commercial losses (such as metering errors and energy lost through the equipment used for transmitting electricity); and c) subsidised electricity set at a below-cost tariff, for political reasons. Combined, these factors have led to financially weak SOEs that rely on government fiscal support. In many jurisdictions, the state spends more on electricity subsidies than on education and health combined.

To keep up with rapid growth in demand, governments have often preferred accelerated capacity expansion over much-needed sector reforms. The weak financial status of SOEs, poor sector governance, inadequate regulations and frequent government interference have deterred private investment. Studies have estimated that the power sector in developing economies across the region will need about $7 trillion of investment between 2016 and 2030. Unlocking private investment will be crucial.

Hard choices ahead
Power sector leaders, experts and governments all understand the problems the power industry faces. But given the enormous challenges of extending electricity to unserved populations while meeting rapidly expanding demand, often the priority is simply to keep the lights on. Making the comprehensive reforms needed to shift to sustainable, low-carbon energy generation is often perceived as a high-risk strategy. This is due to lack of familiarity with the technology, the high capital costs it would involve and the challenges of integrating new systems with existing infrastructure.

Despite this, in 2017 Asia accounted for nearly two thirds of the worldwide increase in renewable energy generating capacity. But widespread application of low-carbon technologies such as wind, solar and battery power is limited to a handful of countries in the region.

So, how can we facilitate the shift to low-carbon energy? Phasing out fossil-fuel subsidies is a good starting point. Developing Asian countries account for a third of these subsidies worldwide. Removing them will: a) level the playing field for renewable energy uptake; b) trigger electricity pricing reforms; c) stimulate investment in energy efficiency; and d) free up fiscal resources to address more pressing development needs in sectors such as education and health.

Governments, however, have often been reluctant to reform tariffs and phase out subsidies, fearing stiff opposition from beneficiaries and social unrest. This mindset needs to change. In parallel with tariff reform, we need measures to protect the poor and vulnerable, while also improving the quality of services.

The ongoing extension of networks to areas without electricity must be complemented by a decentralised system focused on renewables, designed to speed up provision of electricity to these regions. This will require looking again at the delivery mechanisms for electrification of unserved areas. New and innovative business models – such as wider partnerships with NGOs and other social and community organisations – will be needed to improve the sustainability of such efforts. Many such innovative approaches are already in progress, but we need to scale them up.

Another policy goal should be to seek more private investment. We need a concerted effort by governments to undertake comprehensive and bold reforms that can restore the financial health of the sector, limit governments’ own interference in it and promote good governance with transparent policies and regulations.

In 2017, the share of private investments in renewable energy worldwide was more than 90 per cent of the total $263 billion. This clearly highlights that private investors do respond decisively when the building blocks are in place.

A sustainable path
The power sector in developing countries across Asia is at a crossroads. The sector has done reasonably well to power these countries during a challenging period of rapid growth. However, the bigger challenges of environmental sustainability, climate change responsiveness and more inclusive services to the whole population remain critical bottlenecks. These are formidable challenges that require changing mindsets, international cooperation and unwavering commitment to reform.

Nearly all countries have shared their ambition and commitments – as part of their nationally determined contributions – to adopt cleaner energy under the Paris Agreement. But there has been a sluggish start so far on translating these into significant actions. Policy gaps, conflicting priorities and the business-as-usual approach continue to stifle decisive action.

Suitable market-based policies, advanced and affordable low-carbon technologies and innovative financing solutions such as those outlined here have worked well in many jurisdictions, including within the Asia region. International financial institutions have a deep understanding of the sector’s core issues. Working in partnership with climate financing mechanisms such as the Green Climate Fund, they can provide critical support for countries to get on the right trajectory for realising a more sustainable power system.

The way ahead may appear to be full of hard choices. But, considering what is at stake, doing nothing or not enough is not an option if we want to achieve the SDGs and the ambitions made in Paris.