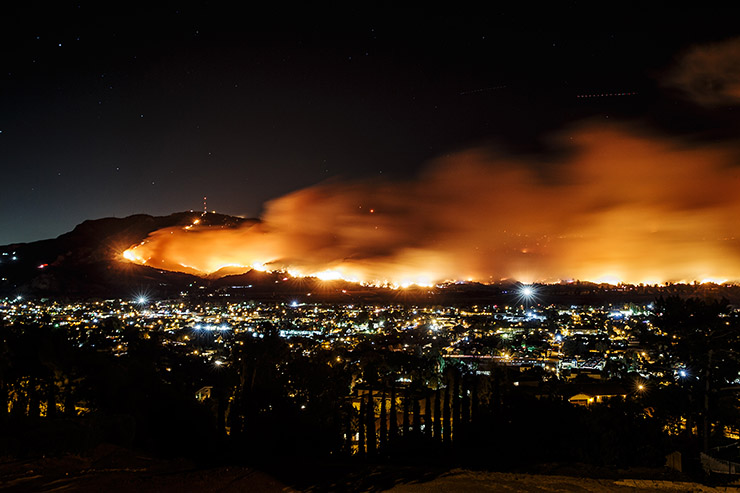 The 2019 Maria Fire viewed from Santa Paula, California. The wildfire was a consequence of a record dry spell. Although the Trump administration has withdrawn the US from the Paris Agreement, California, the country’s most populous and economically powerful state, has committed to a net-zero target. © Marcus Yam/Los Angeles Times via Getty Images

One of the images science communicators often use when explaining climate change is a bath. From open taps, water cascades in, representing greenhouse gases (GHGs). A proportion gurgles away down the plughole, just as a proportion of the warming gases we pump into the atmosphere trickles away naturally into oceans and forests. Whatever is left in the bath warms the world.

The bath analogy is useful but it conceals a crucially important and recently confirmed fact about carbon dioxide, the main GHG: on timescales that matter to people, it doesn’t trickle away. If we turned off the GHG taps tomorrow, the global temperature, already elevated by about one degree Celsius, would not magically start to fall. On timescales that matter, the extent of climate change that we will see is proportional to the total amount of carbon dioxide we put into the atmosphere. We can fill up the bath in a flood or a trickle. What matters is how high we allow the water to rise.

This leads inexorably to a conclusion vitally important for policymaking: if we want to halt climate change, we need to end the net flow of carbon dioxide into the atmosphere. We need to reach net-zero emissions. The sooner we do, the cooler the world we bequeath to our children.

Science cannot be absolutely precise on how soon we need to reach net-zero emissions to hit a given climate target, such as the goal governments agreed at the Paris summit of keeping global warming to 1.5°C. The best shorthand comes from the Intergovernmental Panel on Climate Change (IPCC). Its conclusion: to have an evens chance of hitting that Paris Agreement target, emissions globally need to roughly halve by 2030 and reach net zero by 2050.

The temporary reduction in emissions wrought by COVID-19 cannot hide the scale of that challenge. With few interruptions, emissions have been rising for centuries, ever since fossil-fuel burning began at scale. We are talking about turning around that supertanker, in which so many have so much invested, in just 30 years. No serious analysis has concluded that it cannot be done, as the technological and economic tools exist. As ever, the big question is whether governments and others will deploy them at the scale and speed required.

Commitments so far
A growing number of governments have bitten the bullet and set out plans to bring their emissions to net zero by 2050 or before. At the time of writing, five countries (Sweden, the UK, France, New Zealand  and Denmark) have a net-zero target in national law.

A whole heap more (including the entire European Union) are actively working towards doing so, and altogether more than 120 nations have either set or declared an intention to set a net-zero target. They are joined by states such as California and Catalonia, and cities such as Tokyo and New York.

Analysis by my own organisation, the Energy and Climate Intelligence Unit, shows that without double-counting, net-zero nations, states and cities collectively account for half of global GDP. The number of businesses committing to net zero grows so quickly that the list is permanently out of date.

Definitions of net zero, though, vary. Greta Thunberg is among those to have questioned the idea, opining that we ought to be heading for ‘absolute zero’ instead. However, it is not clear what that would mean in practice. So long as humanity continues to pursue any activity that releases GHGs, we will need to remove an equal amount of them from the atmosphere – hence ‘net zero’.

And herein lies the rub. Some of those proposing and enacting net-zero targets – for example, the UK’s statutory advisor the Committee on Climate Change (CCC) – are serious about turning the screw on every source of GHGs, using negative emissions only as an unavoidable bolt-on.

However, oil companies, airlines and others are gaily declaring they will move to becoming net-zero companies while continuing with fossil-fuel burning as usual – basically, paying entities in developing countries to plant trees to absorb all the carbon dioxide they produce. The problems with this approach are legion, from potential clashes with local demands for land, to the insecurity of trying to lock up carbon in trees in an era when climate change is increasing wildfires. Such brass-necked adulteration of a scientifically valid concept for commercial ends amply justifies Greta Thunberg’s disdain – but does not invalidate the justification for governments pursuing the concept properly.

Possible scenarios
So what does a proper net-zero transition look like? Fortunately, there is a growing body of scenarios and plans on which we can draw, including from the IPCC, the UK’s CCC, and its equivalents in Sweden, France and New Zealand.

First, make all energy use as efficient as possible. Second, make electricity generation entirely zero-carbon. Thirdly, extend the use of electricity into areas where currently we burn fossil fuels directly – principally, heating and transport, but also some industries. Fourth, deploy bespoke solutions for industries in which electrification isn’t suitable (hydrogen instead of coking coal in steelmaking, timber instead of cement for buildings, and so on). Fifth, invest in negative emissions approaches to mop up what is unavoidably emitted. These can either be natural – planting new forests, restoring peat bogs – or technological – building machines that in various ways suck carbon dioxide from the atmosphere.

Apart from the fast-growing concern about corporate greenwash, some scientists and campaigners worry that focusing on ‘net zero by 2050’ allows governments and other entities to avoid taking action now – to avoid focusing on the other key part of the IPCC’s analysis, that global emissions should halve over the next decade. This is self-evidently a possibility. But the UK experience so far is the opposite, that having a net-zero target focuses attention on the need for near-term emissions-cutting. Not least because when you are talking about turning over a nation’s entire stock of fossil-fuel-powered cars or gas boilers you obviously gain by starting now and doing it progressively, so that new kit does not have to be scrapped before the end of its lifetime.

Because net zero is necessary for stopping climate change, the concept is only going to grow in importance. But the caveats are essential. If negative emissions through willy-nilly tree-planting become a get-out-of-jail-free card for high-emitting corporates – if that is the direction in which things are permitted to go – then climate change will not be stopped.

So for those who, like Greta Thunberg, are not entirely enamoured of net zero, here are at least two ways in which the power of the streets can be brought to bear. One: to insist on action now as a prerequisite for reaching net zero. And two: to disallow the hijacking of the concept by companies that in reality see it as a way to avoid eliminating their carbon emissions.