To address the climate change challenge, we must prevent and reduce waste, from field to fork 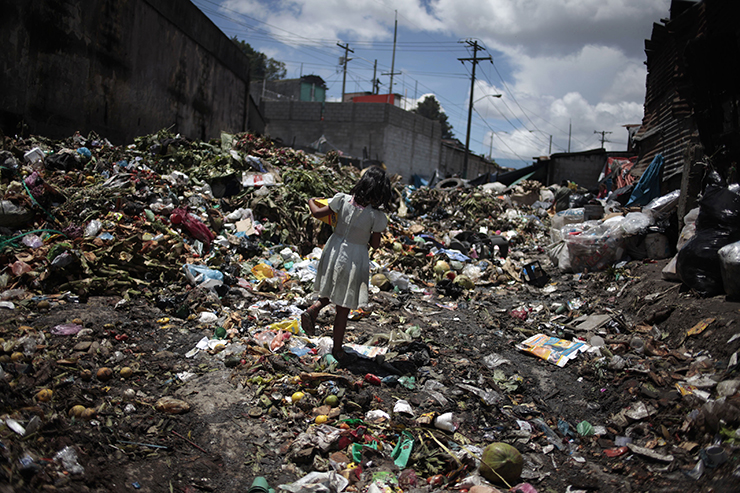 A girl walks amid the garbage from La Terminal food market in Guatemala City.  © Jorge Lopez/Reuters

To address the climate change challenge, we must prevent and reduce waste, from field to fork

“Don’t find a fault, find a remedy”, argued Henry Ford, founder of the Ford Motor Company. But as anyone who’s tried fixing something without first identifying the issue will know, the corresponding remedy will be hard to find.

Climate change is the ‘fault’ that we’ve identified in our current system and we know that it poses a major threat. It remains a complex issue that has divided opinions and caused a furore of debate. But the world as we know it is changing. We need remedies and we need them now.

So far, these remedies have traditionally focused on the symptoms of the problem, such as energy, burning fossil fuels and the preservation of natural habitats. But these are consequences that result from other activity, such as production and consumption of consumer goods – everyday commodities on which the world relies. Rather than focus solely on the symptoms, we need to turn our attention to the underlying causes of the climate change problem.

The need to act on food waste
We know that the world’s population is expected to grow from seven billion now to over nine billion by 2050, and that more than 40 per cent of those people are expected to join the middle classes. While it is good news that many will have a better standard of living, with that wealth comes increased consumption. This will inevitably accelerate climate change if we continue to consume in the way we do today.

However, there is hope. The UK government recently launched a new tool, the Global Calculator, which highlights that temperature increases can be limited even with population growth and that people can still prosper – but that we need to make urgent wide-scale changes. Based on calculations from this tool, tackling food waste has the potential to curb growth in global greenhouse gas (GHG) emissions.

More than a third of all food produced globally never reaches the dinner table. There is a pressing need to change the way in which we produce and consume goods, and food waste must be an overarching priority. There are social, economic and moral implications that relate to food waste. We live in a world where more than 800 million people are hungry, yet food is being squandered in vast quantities. Globally, food waste equates to 1.3 billion tonnes a year. That enormous amount is hard to visualise, but it’s enough to feed all the hungry people in the world – not once, but four times over.

The environmental cost of producing food is also astonishing. Globally, it’s estimated that food waste is responsible for 3.3 billion tonnes of carbon dioxide equivalent (CO2e) per year, taking into account production, harvest, transport, packaging and disposal. Overall, food waste accounts for seven per cent of the world’s GHG emissions. If food waste were a country, it would be the world’s third-largest carbon emitter after the USA and China. In a report written by WRAP for the Global Commission on Economy and Climate, it was estimated that by 2030 GHG emissions could be reduced by up to one billion tonnes of CO2 through food waste reductions alone. That’s equivalent to the annual emissions of Germany.

The 10-Year Framework Programme (10YFP) on Sustainable Consumption and Production established by the UN Environment Programme (UNEP) demonstrates the need to accelerate the move towards sustainable consumption habits and, ultimately, lifestyles. One of the programmes within this framework is the Sustainable Lifestyles and Education Programme. Its mission is to foster the uptake of sustainable lifestyles as the common norm around the world.

The 10YFP, together with the UNEP and Society of Environmental Toxicology and Chemistry’s Life Cycle Initiative, is supporting WRAP and our partner, thinkstep, in a global project that will bring together different methodologies, including WRAP’s own, for analysing waste hotspots. This resource-efficient approach identifies and addresses priority areas across the supply chain, in relation to a host of economic, environmental and sustainability metrics. The aim is to create a comprehensive approach to understanding and acting upon hotspots across supply chains – from field to fork.

Analysing waste hotspots allows businesses, organisations and individuals across the supply chain to identify high-wastage problem areas and diagnose and apply the known remedies. To make this happen, we need a holistic view, a collaborative approach and a willingness to act around the world.

Food production and technology
The production of food can be resource intensive. For example, according to Friends of the Earth, a single chocolate bar can use as much as 2.5m2 in land requirements, and 1,400 litres of water to produce. Foods are sourced globally, so food waste can have wider ramifications relating to its country of origin. For example, wasted food such as rice from Pakistan contributes to a small amount of the avoidable water footprint for UK food waste. However, because of dwindling local water supplies due to the irrigation of crops using the Indus River, the effect this has in terms of natural capital available within the country of production is much higher. It also causes damage to the surrounding mangrove forests, which are known to capture carbon.

There is scope for technology to make significant improvements. As much as 40 per cent of food produced in developing countries is wasted before it reaches the market, according to the UN Food & Agriculture Organization. The Institution of Mechanical Engineers holds that up to half of fruit and vegetables are lost in sub-Saharan Africa and India. It is suggested that about 25 per cent of food wastage in the developing world could be eliminated with better refrigeration equipment.

Other solutions to prevent waste upstream include better machinery to harvest greater volumes of food while preventing bruising or damage to crops, along with better protective packaging. Financial services provider Rabobank estimates that these measures could save food producers in Europe €60 billion annually.

Manufacture, retail and hospitality
In 2007, Coca-Cola rolled out its lightest-ever bottle – something that was achieved without compromising quality or brand image. By optimising packaging in this way, Coca-Cola in the UK was able to use approximately 1,400 fewer tonnes of PET plastic every year.

Supermarkets, brands and suppliers have also made reductions in waste in recent years. Leading members of the grocery sector embarked on a collaborative voluntary agreement called the Courtauld Commitment to explore ways to improve resource efficiency. Supermarket chain Asda, a division of Walmart, increased the shelf life of over 1,500 products by implementing a more efficient delivery process. Heinz introduced ‘Fridge Packs’, resealable containers designed for refrigeration, to help consumers reduce food waste and keep food fresher for longer. And a number of retailers printed advice on packaging on how to store leftovers or freeze food, and introduced new packaging designs to help prolong the use of food.

Food waste prevention efforts have also led to increased redistribution. Over 80 per cent more food is now being redistributed from the grocery sector. The hospitality sector, through the Hospitality and Food Service Agreement, has also increased redistribution by almost a quarter. This is food that would have otherwise gone to waste and is now, in some cases, being sent to disadvantaged people. The Think.Eat.Save guidance document launched last year was the first of its kind to provide practical steps to help governments, local authorities and businesses anywhere in the world find ways to implement changes to reduce food waste and save natural resources.

Household food waste, recycling and recovery
In the UK, an area equivalent in size to approximately two million rugby pitches would be needed to grow all the food that’s thrown away from homes each year. But progress has been made. In 2007, the Love Food Hate Waste campaign was established, aiming to raise awareness and show how to make simple, everyday practical changes that could make a big difference. Since it was rolled out, food waste in the UK has been reduced by 21 per cent, saving consumers almost $20 billion over the five-year period to 2012. There is still a long way to go, but this progress has been instrumental in developing an approach to reduce food waste, expertise that has been exported to parts of Canada, Australia and New Zealand.

Looking beyond the statistics there are powerful stories. The campaign helps people understand how to plan meals in advance, how to utilise and store excess food and how to measure the right quantities of food. I have heard of single mothers on low incomes struggling to feed their families. But by making these small changes, it can make a big impact on family’s lives. In some cases, family food budgets have been reduced by 80 per cent.

Prevention and redistribution are the first points of action, but when food is buried in landfill sites, it creates methane, a GHG. However, there are opportunities to recycle and recover energy from food through anaerobic digestion plants that can be used to create renewable energy that is carbon neutral. A fifth of all UK GHG emission reductions from 2010-2013 were due to a reduction in emissions from landfill. This can be attributed to less biodegradable waste going to landfill as a result of increased food waste prevention measures and increased collections, for example.

Ensuring that all the world’s people have enough food is the vision of UN Secretary-General Ban Ki-moon’s Zero Hunger Challenge. Given that it can play such a key role in mitigating climate change, it’s something that needs to be acted upon. We have an ethical, environmental and economic obligation to end food waste. We’ve identified the fault and we have the remedy, so what are we waiting for?