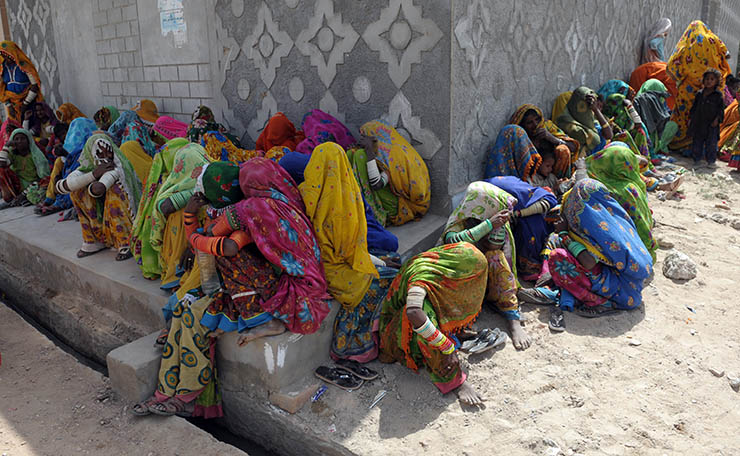 Women have an enormous capacity for transformational leadership. Many women and girls already play key – but unsung – roles in the protection and management of natural resources and are at the forefront of actions aimed at reducing human contributions to global warming.

However, their experience, and their potential to increase resilience against shocks from climate change, remains largely untapped. This is particularly important in planning the role of women and in integrating a gender perspective in disaster risk reduction, climate action and the post-2015 development agenda.

Demand for food is growing while land and water resources are becoming ever more scarce and degraded. Climate change will make these challenges yet more difficult.

Now, more than ever, when UN Member States are expected to adopt a new climate agreement at the Conference of the Parties in Paris (COP21) in December 2015, we need decisive global action that recognises and optimises the role of women and girls in a world where the climate is changing and where lives and livelihoods are at stake.

In March 2015 at the Third UN World Conference on Disaster Risk Reduction in Sendai, Japan, participants called for a strong human rights-based approach to climate action that takes into account not only women’s vulnerability to climate change but also their crucial capability as leaders in disaster preparedness and management.

We know that climate-related hazards magnify gender inequalities and widen the existing socio-economic and political gaps between women and men. These are compounded by the intersecting issues of poverty and a lack of control over land and productive resources. Droughts, extreme weather events, sea-level rise, ocean acidification and flooding hit women and girls harder than men and boys. Yet gender stereotypes negatively define and limit women’s and girls’ responses to natural disasters.

Estimates by Oxfam suggest that around three times as many women as men perished in the Asian tsunamis. Typhoon Haiyan, which displaced four million people in the central island regions of the Philippines, resulted in a death toll of 6,300. 64 per cent of those who died were women. Although they could be active responders and rescuers if included in early warning systems, without inclusion women become vulnerable and limited in agency.

Increasing participation
While traditional conceptions of women as weak or incapable limit their mobility, voice and space to take leadership or developmental roles, the actual needs of women and girls are not always considered or met. For example, the UN Population Fund estimates that following Cyclone Pam in March 2015 there were roughly 56,000 women and girls of childbearing age in the island nation of Vanuatu that required support such as hygiene supplies and reproductive health services. An estimated 5,000 women experienced sexual violence in the month following Typhoon Haiyan in the Philippines.

These issues cannot be solved until women’s contributions, as well as men’s, are fully considered and until women can voice concerns about gender-based violence, and advocate for proper infrastructure, resources and safe spaces during and after disasters.

In addition, the reality of women’s roles in the economy and in sustaining communities is not captured in the current methods of accounting and reporting of climate change impact. Consequently, the losses experienced by women are invisible. The economic impact recorded relates to damages to productive resources and losses in the formal employment sector, both of which are predominantly owned and controlled by men.

Women’s activities in the informal sector, their participation in subsistence fishing and farming, and the greater burden of care-giving placed upon women after disasters are most often not captured in formal accounting, resulting in substantial under-valuation. This reinforces the overall underestimation of women’s contribution and perpetuates stereotyping.

In fact, in many parts of the world, women are leading climate action. Women heads of state and governments, CEOs, heads of international organisations, grassroots and community activists, young women and household managers are all making strides on climate issues, inspiring action and benefiting entire communities.

Rural Women Light up Africa, a partnership between UN Women and the Barefoot College of India, enables women in villages in developing countries to learn to become solar engineers, and to install and maintain solar equipment for their communities. Beyond introducing a renewable and sustainable source of energy, the programme’s benefits for women and girls include increased community status, better health, education and improved livelihood options.

Women have also taken the lead in integrating ideas of personal responsibility into lifestyle and behavioural changes, expressed in part by consumer choices that aim to benefit the environment.

The 1 Million Women initiative, a coalition of women in Australia, was launched to tap women’s role as decision-makers in the use, production, distribution and disposal of goods in their households. It has been chosen as a Women for Results winner of the UN Climate Change Secretariat Momentum for Change initiative.

This year is pivotal for the international community, with the expected adoption of the post-2015 development agenda and a new universal climate agreement. It has also committed to step up the implementation of the Beijing Platform for Action for women.

The new climate agreement, to be adopted at COP21, will need to ensure the promotion of gender equality and women’s empowerment. Only then will we see gender-responsive climate action that addresses the pervasive stereotypes and social norms that reinforce traditional gender roles.

We have to accelerate concrete actionable commitments and strengthen women’s agency to realise climate justice. This means dismantling discriminatory institutions and giving women access to decision-making roles in disaster areas and when formulating renewable energy strategies. Efforts must also be made to target the multiple, intersecting inequalities that can impact the effectiveness of societal and political changes. The engagement of civil society is critical to advancing these goals and to holding governments accountable for their climate commitments.

Climate change is a human rights issue. Gender equality and women’s empowerment are essential for an inclusive, sustainable and resilient world – a Planet 50-50. It is imperative that women’s voices are heard and their full participation, engagement and leadership are ensured in designing climate policies, strategies and responses at various levels – from the village to the world stage.

Neha Juneja is the co-founder and CEO of Greenway Grameen Infra, a start-up that designs and markets efficient cooking solutions to rural households. Her first product, the Greenway Smart Stove, was developed by incorporating the views and ideas of women living in rural areas and functions as a modern replacement for traditional mud stoves. On average, one stove saves 5.6 trees, 304 working hours, and 1.5 tons of CO2 emissions per year. Rural women in particular benefit from these stoves due to their responsibility for cooking in the household and time-consuming fuel collection. Efficient stoves limit indoor air pollution, reducing health problems associated with smoke. Having a more efficient stove in the home also means more time for women and girls to go to school, carry out productive work or enjoy leisure activities.

The rural An Dung commune in central Viet Nam is prone to severe floods and landslides that damage crops and houses and cut off the village’s one road out of town. Ranh Nguyen, a 35-year-old woman farmer, knew she had to do something. Now the head of the Viet Nam Women’s Union group, Ranh and other women worked with UN Women and the government of Luxembourg to strengthen the role of women in disaster risk reduction and management.
As a result of extensive training and advocacy, the Women’s Union now has a government-mandated place in decision-making boards of the village’s Committees for Flood and Storm Control at all levels. Engaging women in leadership positions enabled Ranh and her neighbours to protect and rebuild their communities through climate change education, training in first-aid techniques such as cardiopulmonary resuscitation (CPR), and the sharing of experiences with other women. Before the next flood came, they had an evacuation plan in place for people living in lowland areas and near the river, and no further lives were lost.