What can be done to mitigate the impacts of climate change on food security, hunger and malnutrition? 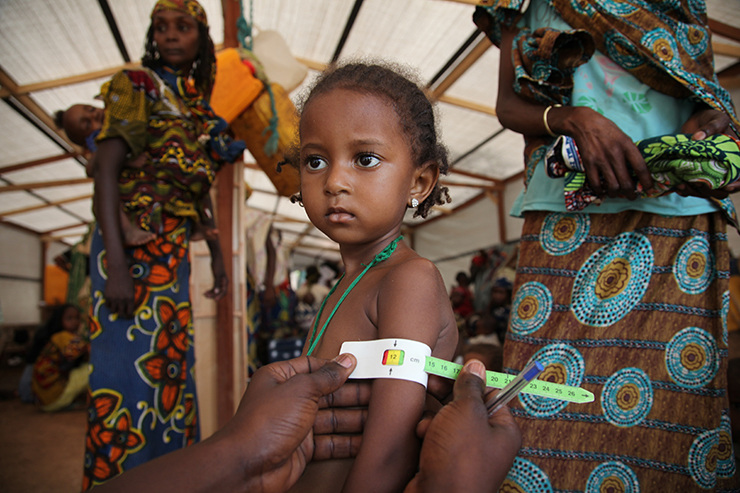 A girl is assessed for malnutrition in Bangui, Central African Republic, a country afflicted by ongoing civil war.
© UNICEF/LeMoyneFarran

What can be done to mitigate the impacts of climate change on food security, hunger and malnutrition?

Climate change represents a serious threat to food security and the most vulnerable people are already being affected the most.

While progress has been made during the last two decades to reduce hunger, climate change jeopardises these gains. About one in every nine of the world’s population was chronically undernourished between 2012 and 2014, according to the 2014 State of Food Insecurity in the World report.¹ But, by the year 2050, hunger and child malnutrition could increase by as much as 20 per cent as a result of climate change.²

How climate change drives hunger
Climate change acts as a multiplier of existing threats to food security, and of hunger and malnutrition. It will make climate disasters more frequent and intense, land and water more scarce and difficult to access, and increases in agricultural productivity even harder to achieve. This could accelerate urbanisation and intensify conflicts over even scarcer resources, likely leading to new humanitarian crises, migration and displacement.

A significant body of research shows that changes in climatic conditions have already affected the production of some staple crops. Higher temperatures impact yields, while changes in rainfall could affect both crop quality and quantity.

Climate change will also affect people’s access to food and their nutrition. Climate change could increase the prices of major crops in some regions. For the most vulnerable people, lower agricultural output would also mean lower income. Under these conditions, the poorest people – who already use most of their income on food – would have to sacrifice additional income to meet their nutritional requirements.

The most vulnerable at risk
Increased risks from climate extremes are among the most concerning risks from climate change. In 2013, more than 90 per cent of natural disasters were climate related, primarily floods, storms and droughts. More than 80 per cent of the world’s food-insecure people live in countries that are prone to natural hazards and are characterised by land and ecosystem degradation,4 amplifying the damage of disasters.

Climate shocks disproportionately affect the most vulnerable and food insecure people, especially women and children. When climate disasters strike, the situation of already vulnerable people can quickly deteriorate into a food and nutrition crisis, as they resort to desperate measures, such as selling their productive assets, taking their children out of school or reducing their overall food consumption. These measures invariably mean that they are more vulnerable the next time a shock occurs.

Studies from Bangladesh show increased rates of wasting (an indicator of acute malnutrition) and stunting (an indicator of chronic malnutrition) among preschool children after floods. In Niger, children born during a drought are more than twice as likely to be malnourished between the ages of one and two. In the Philippines over the last two decades, 15 times as many infants have died in the 24 months following typhoons than directly as a result of the typhoons. Most of these infants are girls.

Natural disasters displaced an average of 27 million people each year between 2008 and 2013, with at least 15 million people a year being displaced. Developing countries account for the vast majority of displacement – 97 per cent between 2008 and 2013. Significantly more people are displaced by disasters now than in the 1970s. According to the Internal Displacement Monitoring Centre, in absolute terms, the risk of displacement is estimated to have more than doubled in four decades. Climate change is increasing this risk.

WFP: building resilience through large-scale innovations
The World Food Programme is the largest humanitarian agency fighting hunger worldwide. In the last decade, almost half of our emergency and recovery operations addressed the impact of climate disasters. These operations had a combined budget of $23 billion.

We have made improving our efforts to reduce disaster risk, build resilience and support adaptation to climate change central components of our work. Our primary focus is to ensure that those who are most vulnerable and at risk of hunger have adequate access to food. Without significant investments in building their resilience, the world’s most food-insecure people will not be able to begin adapting to the changing climate. Specifically, we help people diversify their livelihoods under a changing climate; protect their assets, incomes and crops with insurance and savings; improve their access to markets and help them make more informed decisions with better climate forecasts.

We are working to accelerate the development of large-scale solutions to help the countries and communities we serve better manage increasing climate risks and become food secure. Not only do we believe this is necessary, we also believe it makes economic sense. A 2013 study commissioned by the UK’s Department for International Development – on the economics of early response and resilience – found that investments in resilience bring substantial returns in terms of averting the need for humanitarian assistance and achieving broader developmental outcomes.

Building the resilience of vulnerable people to climate change is a pre-requisite to eliminating hunger. With the climate negotiations taking place in Paris later in the year, 2015 is an opportunity to continue working towards a zero-hunger world. A meaningful agreement that includes food-insecure populations and the required actions and investments to help them to adapt to climate change should be our next goal.