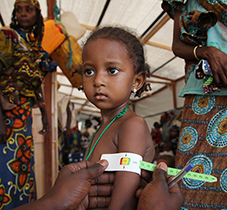 A worker from the NGO Action Contre la Faim (Action Against Hunger), a UNICEF partner, measures a girlís mid-upper-arm circumference to assess her nutritional status, in the predominantly Muslim PK12 neighbourhood of Bangui, the capital. The yellow on the band indicates that she is at risk of becoming malnourished. Children who screen positive for malnutrition are receiving Plumpyínut ready-to-use therapeutic food.

In early March 2014, conflict continues to worsen living conditions in the Central African Republic ñ already among the worldís poorest countries, and where children have long been deprived of education, protection and basic social and health services. Across the country, 2.5 million people need assistance, and 601,000 are internally displaced. Of these, 176,858 are in Bangui, where inter-religious tensions are significant. Launched jointly by UNICEF together with other United Nations agencies, the 2014 Strategic Response Plan for the Central African Republic calls for US$551.3 million to cover humanitarian responses this year. UNICEF is leading efforts in the sectors of water, sanitation and hygiene, nutrition and education.