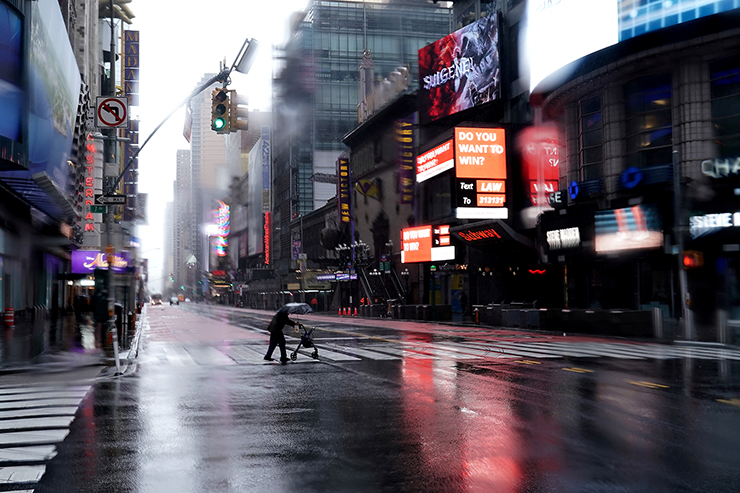 A largely deserted Times Square, New York, US during the COVID-19 outbreak. The response to the crisis has demonstrated a previously unimaginable capacity to adapt when the threat is sufficiently tangible. © Carlo Allegri/Reuters

We can change the way we live our lives somewhat, or have it changed for us out of all recognition. This has been the implicit or explicit message of much of the conversation around climate change in recent years. It was also the message of recent political campaigns that made a green new deal or industrial revolution the heart of their offer – and enjoyed a surge in support towards the end of the decade (although in many cases falling short of elected office).

And now, in the world’s reaction to the coronavirus pandemic, we have seen both the truth of that statement and the fact that – faced with the immediate reality of such a choice – the vast majority of the populations of over 90 countries around the world have willingly chosen the former. Furthermore, by and large, those whose privilege means that they are unlikely to suffer direct and immediate consequences from such a crisis have demonstrated that they are willing to make sacrifices in solidarity with, and in order to protect, the most vulnerable communities that will be hardest hit.

Shared experience
However, it would be naïve to assume that having made such a choice in response to one crisis, it will now be straightforward to persuade the world to make it once again in response to another, and so set the world on a pathway to limit global warming to a less disruptive 1.5°C above pre-industrial levels.

For one thing, while COVID-19 – like climate change – represented an invisible threat, it moved fast enough to seem tangible and capture the public imagination. For another, limiting the spread of the new virus was something largely within our collective power and where a considerable number of us had the ability to effect the change we needed to see.

This isn’t true of climate change, where the wealthiest individuals and the leaders of specific industries have dramatically more ability to curb emissions than the population at large, and where meaningful smoothing of the curve can only be achieved through government policy, not lifestyle changes.

It is too early to say what the lasting effects of COVID-19 will be, and we should be wary of superficial ‘hot takes’. Only time will tell whether, as we hope, the consequence will be a greater realisation of the importance of global cooperation and international mechanisms to address existential risk or, as we fear, it will be an amplification of bigoted notions of disease-causing foreigners, an impossible demand for borders impermeable to microbes, and xenophobia. Que sera sera – we can leave it to the scholars of the future to write the history of this time. Our job is to make it.

My personal experience was no doubt common to many in that it was at the same time hyper-global and hyper-local. On the one hand it has united people across the globe in a shared experience, and demonstrated the truth of the notion that our health system is only ever as strong, just as our climate is only ever as secure, as it is in its weakest places globally. The fact that we are all part of the same ecosystem, and are interconnected by far more than Zoom calls and bad internet connections, has never felt so tangible.

At the same time, day-to-day life has never felt so parochial, as our worlds shrank to a single house, or on rare occasions a nearby park and a local shop. In so doing we found more self-reliance, as many of our highest carbon activities – the commute to work, the overseas conference – turned out to be largely optional.

Community interconnections, be they in the form of mutual aid networks or the more informal ways in which – for example – our chemist set aside the last bottle of infant paracetamol for us and left it outside our front door, came to the fore. They demonstrated that a future of more local supply chains, sustainable communities, and maybe even parallel power structures is perhaps not as utopian as it seemed only a couple of months ago.

Political will
Indeed, nothing seems quite as utopian as it did a couple of months ago. Seeing the Herculean efforts governments around the world have made – the trillions of dollars that have been spent, the new hospitals built in days, the overnight eradication of homelessness, the new elements of a welfare state established in just a few weeks – have demonstrated that many of our ideas of what could and could not be achieved were based on little more than the absence of sufficient political will to see it through. What previously appeared to be simply the way things were has been exposed as a political choice. To quote an inadvertent meme of my country’s recent general election campaign: “everything is horribly, brutally possible”.

This sense of possibility comes in the nick of time, because we’ve reached 2020, the year that has appeared on the front cover of our publication since the series began. It is the year that carbon emissions have to peak, the year that states’ climate actions agreed under their nationally determined contributions (NDCs) to the Paris Climate Treaty start. It is the year that, as Helen Mountford argues, there must be a step change in ambition of those NDCs if we are to have any hope of limiting global warming to 1.5°C above pre-industrial levels.

It was to be the year also where the Conference of the Parties (COP26) for the Paris Climate Treaty was to have come to the UK. COVID-19 put paid to that, and the conference will now be delayed to 2021. But COP26 was only ever to be the full stop at the end of the sentence that 2020 will write on the world’s response to climate change – we still can and must deliver the substance before then. After all, another lesson of COVID-19 has been that, while international institutions, mechanisms and treaties play a vital convening, coordinating, communicating and standard-setting role, ultimately it is up to those with executive power – largely still sovereign states – to deliver the policy changes a crisis demands.

This publication looks at those changes. Edward Barbier talks directly about how post-COVID-19 economic recovery can be made green. Laetitia De Marez talks about the importance of finance for the developing world. Cristina Gamboa looks at what reducing carbon emissions means for the construction industry. Jiang Kejun looks at the technology we already have and the technology we still need, and Sandy Verschoor tells us how Adelaide is paying for its transition to zero carbon.

I am particularly excited by the final section, ‘Grey areas’, where we have attempted to look with nuance and good faith at some of the most difficult and controversial issues within the battle to mitigate and adapt to climate change. These issues include ‘how clean is biomass?’, ‘what role will nuclear fusion play in our future?’ and ‘should we be converting waste to energy?’.

You may disagree with some of the essays in this section – I would be quite disappointed if you didn’t – but I think it is important to bring these arguments into the open, and have them with evidence, rather than letting them fester.

It is vital that we keep this global conversation going, and vital that member states continue to stress their ambition and their commitment to meaningful concrete steps. Because even if we manage to smooth the climate curve, and get emissions to peak in 2020, there will still be much to debate.

We probably only have about 400 gigatons of carbon dioxide we can emit into the atmosphere and still keep to the 1.5°C pathway. That budget needs to last us for the many thousands of years it will take for our carbon cycle to heal, hence the need to reach ‘net zero’ as soon as possible, as Richard Black argues. Which of us gets to emit these remaining 400 gigatons is therefore a moral question, not just an economic one.

It’s also a question the public and civil society at large are increasingly demanding they be given a say in. Developing countries in particular make a compelling case that the amount of carbon the developed world has emitted historically means that they’ve already had their ration. In September the nations of the world will adopt a political declaration on the occasion of the UN’s 75th anniversary. It should tackle these issues, and extend global ambitions.

Climate 2050
We will continue to push this agenda, and explore these questions, as we move beyond Climate 2020 and towards Climate 2050. Personally, I hope our response will mirror the experience of COVID-19 in that it will also be at the same time hyper-global and hyper-local: while the pandemic demonstrates the need for closer global cooperation, it would be a mistake to suggest that that necessarily means power should be moved upwards.

For all that COVID-19 has united the world in a shared experience, elements of that experience were extremely different from place to place. This divergence is based not so much on nationality but on much more localised economic, demographic and geographic factors – much as the impacts of climate change have been and will continue to be. Empowerment at the level of the community, and the vesting of executive authority in local decision-makers, must become the cornerstone of the new way of life we now know is not only possible but essential.