Finance for a future

The financial community played a constructive role in the Paris Agreement – it must now provide leadership in the transition to a sustainable global economy. Eric Usher, Head of the UNEP Finance Initiative, talks to Climate 2020 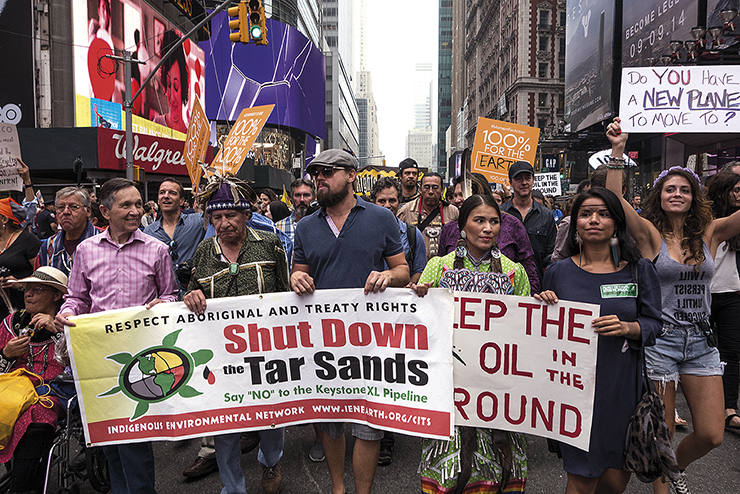 Protests against tar sands as part of the massive People’s Climate March in New York 2015. Investors must be more active in holding companies to account for their role in climate change.  © Viviane Moos/Corbis via Getty Images

Finance for a future

The financial community played a constructive role in the Paris Agreement – it must now provide leadership in the transition to a sustainable global economy. Eric Usher, Head of the UNEP Finance Initiative, talks to Climate 2020

The success of the UN climate conference in Paris (COP21) surprised even the optimists, says Eric Usher, Head of the UNEP Finance Initiative. Financial institutions, recognising the threat that climate poses to the global economy, added their momentum to achieving that outcome.

From the start of COP21 there was a feeling of optimism. “I’ve been to negotiations like this before,” says Usher. “In Paris there was a much more confident atmosphere. There was a readiness for governments to say that the time to act  is now.”

The talks ended with the 195 countries at the meeting agreeing to keep the increase in the global average temperature to below 2°C above pre-industrial levels and to try to stay within 1.5°C. But the Paris Agreement is just the start: everyone, particularly the financial community, must now translate words into action.

Making climate change a priority
The UNEP Finance Initiative is an interface between the UN system and global finance. Founded almost 25 years ago, it is a membership organisation with over 200 members, around half of those from developing countries. More than 90 per cent of the world’s largest banks are members, along with many of the big insurance and re-insurance companies.

Usher spends much of his time visiting CEOs and convincing them to “set aside an hour a month, or a week, or a day” to the threat of climate change and other sustainable development challenges. “We act as the main link between our members and UN negotiations,” he says. “We explain what is going on, and we help them to provide input to these often hard-to-understand processes.”

Usher agrees climate change isn’t the top priority of every CEO. One reason for this is that business leaders only tend to focus on the quarterly reporting cycle imposed by the capital markets, while addressing climate change requires longer-term investment thinking.

Therefore it is Usher’s job to convince business leaders that, although climate change isn’t destabilising the world economy just yet, when it does, it may be too late to do anything about it. Insurance companies are already seeing a significant uptick in weather-related claims.

During the lead up to COP21, Usher says there were encouraging signs that this message was getting though. Two examples included the Global Investor Statement on Climate Change and the Portfolio Decarbonization Coalition (PDC). The UNEP Finance Initiative was involved in both.

The Global Investor Statement on Climate Change called on policymakers to address climate change. “It was signed by over 400 investors worth more than $24 trillion in assets – that’s a third of global capital markets,” explains Usher. Signatories stated that they were ‘acutely aware of the risks climate change presents to our investments’, an acknowledgement that required them to act and to call on governments to do so as well.

The PDC mobilised 25 investors to commit $600 billion of their investment portfolios to decarbonisation. During COP21, the UN Secretary-General Ban Ki-moon, French President François Hollande and Ministers Fabius and Royal, all referred to the PDC in their speeches as a leading example of investor engagement on climate change.

This, says Usher, put pressure on COP21 delegates: a large proportion of the global finance community were convinced enough of the risks to take action themselves.

Discerning the financial risks
Usher has been making this argument for years. Even so, he believes that Bank of England Governor Mark Carney put things most succinctly in September 2015 in a speech at Lloyds of London called ‘Breaking the tragedy of the horizon – climate change and financial stability’.

Carney identified three clear risks. Firstly, physical risks. Weather-related events like floods and storms can, and do, damage property and disrupt trade. The insurance industry, Carney said, is seeing the start of that now, but more is to come.

Secondly, Carney cited liability risks, or “impacts that could arise tomorrow” when parties that suffer loss from climate change seek compensation from those they hold responsible. This, said Carney, could hit carbon extractors and emitters the hardest.

Finally, he identified transitional risks. As we move towards a low-carbon world, some companies will be winners, others will be losers. Assets will change in value. Balance sheets will be hit.

“Carney’s involvement was a watershed moment,” says Usher. “It was the first time that a major actor in the financial industry, a central bank governor no less, said that the world’s financial systems and climate change are inexorably linked.” These, say Usher, were the forces in play when COP21 started.

Taking responsibility
Implementation of COP21 is a challenge, as is working out who is responsible for specific carbon emissions.

“Take an auto-maker, for example,” Usher says. “Is an auto-maker responsible just for its own emissions, or for the emissions of the cars it produces? Does the same go for the shareholders who finance the auto-maker? We need to get clarity on these sorts of issues, with the responsibilities clear and the expected actions pragmatic.”

Besides sorting out responsibilities for carbon emissions, there’s also the issue  of who will finance the low-carbon economy. Banks and insurers may well divest themselves of stocks in coal companies, “but taking your money out of a dirty industry doesn’t mean you will put it into clean alternatives. The finance community needs to stop being part of the problem, but also increasingly look to finance the solutions”.

And this, says Usher, is a role that investors can play. Shareholders, institutional investors and pension holders regularly hold companies to account for unethical investments. They must do the same thing for climate change. “There has to be a consumer consensus. Investors won’t deal with companies that are involved in child labour, tobacco, munitions. Why should climate change be any different?”

This, he says, will create a profit imperative for carbon consumers to act now, and not wait for the “tragedy of the horizon”. Business and government are pushing each other to take action. If consumers apply more pressure to business, he says, then that would create a real engine for change.

Is this realistic? The global economy is still in the shadow of the financial crisis of 2008, so surely when the next crash comes along, won’t carbon awareness slip from agendas? Usher thinks not. “Everyone has their priorities, and things change,” he says. “But when the crash of 2008 happened, nobody thought it was an excuse to start investing in child labour again.”