Finance: once more, with feeling

2018 may go down as the year in which the world finally woke up to climate change. But will it also be when finance really started to become part of the solution? 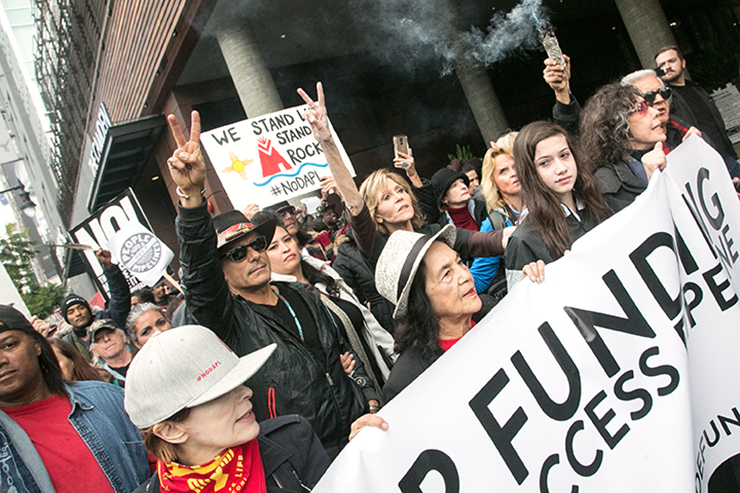 The #BankExit Rally in Los Angeles against Wells Fargo and Chase Bank for funding the Dakota Access Pipeline. The investment community will need to make a huge cultural leap to move from a position of detached moral judgement to becoming forceful stewards for the public good  © Gabriel Olsen/Getty Images

Finance: once more, with feeling

2018 may go down as the year in which the world finally woke up to climate change. But will it also be when finance really started to become part of the solution?

In September 2018, UN Secretary-General António Guterres called climate change an “existential threat” and spoke explicitly about the need for an emergency response. The following month, the Intergovernmental Panel on Climate Change (IPCC) cautioned that we have just 12 years to get on track to limit global temperature rise to 1.5°C above pre-industrial levels. So far, so normal: despite the unprecedented nature of their warnings, we have heard – and ignored – urgent calls for action before.

But this year we have finally seen growing awareness of just how conservative the IPCC process actually is. We have also seen official acceptance of the much wider nature of the climate challenge, which goes well beyond carbon and even greenhouse gas emissions. And the Bank of England will, according to the FT, “put banks and insurers on notice to vastly improve their planning for the long-term risks of climate change, placing senior executives in the line of fire if their institutions take insufficient action.” Moreover, UN officials are finally starting to take seriously the possibility that either the finance sector will drive the change we need or it won’t happen.

The role of non-state actors
Until now, officials had been largely content with finance creating the best possible mood music for national government action. But, partly as a result of US President Trump’s decision to withdraw from the Paris Agreement, and the seemingly unending preoccupation of EU leaders with domestic issues, the focus has now firmly moved to ‘non-state actors’. So what does this mean for the finance sector and in particular for institutional investors?

First, if the focus is genuinely on making a rapid energy transition, then it is real-world decarbonisation that matters, not portfolio decarbonisation. The latter is a luxury we may not have time for and, indeed, may be a dead end. Pseudo-scientific modelling risks becoming a distraction activity since it uses data that is almost certainly, and in multiple ways, erroneous. It plugs this data into portfolio risk models from the 1950s (so-called modern portfolio theory) that manage only relative risk.

There is no evidence this will have real-world impact any time soon. There is also an uncomfortable parallel with the risk models used to assess credit derivatives ahead of the global financial crisis, where the widespread use of flawed models gave a misplaced sense of confidence.

Second, we need a big switch in investor focus to forceful stewardship. Today, most investors think about investing sustainably primarily as a question of integration. But investors should evaluate climate strategies on one criterion: will it shift intra-firm capital allocation at the really problematic companies and sectors, and will it do so in time?

There are strong grounds for concluding that existing strategies (e.g. integration, divestment, portfolio decarbonisation, green bonds and constructive engagement) are wholly inadequate with this criterion in mind.

What this means in practice is that investors should require lower than 2°C or net-zero (by 2050 latest) transition plans, starting with high-impact (supply and demand) sectors. Industrial-scale resolutions are the only practical way to deliver this investor signal given the time available and investors’ stewardship resources.

This approach is very different from the case-by-case engagement approach used today. Not even the biggest environmental, social and governance (ESG) teams could cover the number of companies that need attention, particularly those managers who have assets under management bigger than many developed-world country GDPs.

Such a systemic approach also addresses any risk of first-mover disadvantage. This is often given by both companies and investors as a case for non-action – witness the 2018 Shell AGM debate when many investors recoiled over a resolution which simply asked the company to align with the Paris Agreement.

The time for virtue signalling has passed. This includes projects like the Montreal Pledge or casual signing of letters to governments, which are simply ‘wish lists’ that investors know will not happen, not least because they have no intention of doing the hard lobbying to make them happen. The UN and non-governmental organisations should stop rewarding such ‘predatory delay’ strategies since it does not convince hard-nosed corporate executives.

Climate Action 100+, a five-year investor-led initiative to engage key emitters, is well placed to coordinate the kind of forceful stewardship described above, provided that CEOs take a hands-on role in the way that happens at the World Business Council for Sustainable Development or the Business Roundtable.

Third, the focus on carbon is almost certainly not enough. This is clearest with regard to deforestation, which many leading scientists believe is just as important to stop as the use of fossil fuels. But the wider ecological crisis – for example, biodiversity loss – cannot simply be put down to climate change. That kind of climate fundamentalism is not healthy. And, even more broadly, we are very unlikely to get a grip even on climate change without parallel action to address major social issues, such as income inequality.

Investors should engage with these critical ‘market wellbeing’ issues of our time, as well as on the factors that underpin our lack of progress. These include gender balance and other corporate groupthink, the corporate capture of politics, and bribery and corruption – whether illegal or legalised, as is the case in the US, where “dark money” has bought political control, as Jane Mayer has convincingly documented.

Internal transformation
The importance of these wider agenda items is well described by Charles Eisenstein in his recent book Climate: A New Story. But even if you don’t go as far as he does, it is clear that – tactically – this broader agenda is critical even for climate-focused investors. Again, the best thing investors can do is to be assertive stewards on these issues as well.

To deliver on this transformative agenda, investors need to set themselves on a path of internal transformation. In the same way that the gender challenge will not be addressed by focusing just on women, so responsible investing needs to be central to the people-management strategy for traditional analysts/portfolio managers.

How these mainstream staff are recruited, promoted and rewarded – in other words, how performance metrics are adapted to go beyond simply beating a cap-weighted benchmark – is key. And to give this process some teeth, it is important that irresponsible values and behaviour trigger negative consequences, including, if serious, dismissal. This culture change should, of course, start with senior management teams and boards of directors.

In parallel, responsible investment teams need to be endowed with appropriate status. The head of ESG should be a member of the senior executive and all the front-line ESG staff should be financially literate, as well as having strong values, in particular around stewardship. Technical ESG analytical skills are important but not enough. And there should be an informed board-level sponsor to provide air cover if needed.

Investors should use ESG performance reporting to the board, all staff and clients/investment consultants to drive continuous improvement and novel alliances. Today, managers often say, “you are the only one to raise this” when asked for something by a client. Rather, they should help concerned clients to collaborate with internal change agents to create more effective alliances for change.

Investors also need to work with their professional bodies – for example, the UN-supported Principles for Responsible Investment – to ensure it is easy to compare managers and so identify leaders/laggards/mid-range movers within the investment community. This will drive progress.

Without this focus on internal transformation, it is highly unlikely that fund managers will rise above their conflicts of interests and lack of skills to do what we all need them to do – urgently. As Martin Wolf notes in his hard-hitting comment (“Inaction over climate change is shameful”): “The natural tendencies are either to do nothing, while insisting there is no problem, or to agree there is a problem, while merely pretending to act. It is not clear which form of obfuscation is worse.”

The good news is that investors have made a policy decision to ask for transition plans from the energy sector and the 2019 AGM season will be a good test of this new commitment.