Despite financial pledges and rhetoric on the importance of climate adaptation for vulnerable nations, the lack of tangible finance flows tells a different story. If the most at-risk communities are to adapt before it’s too late, we must unblock adaptation finance now 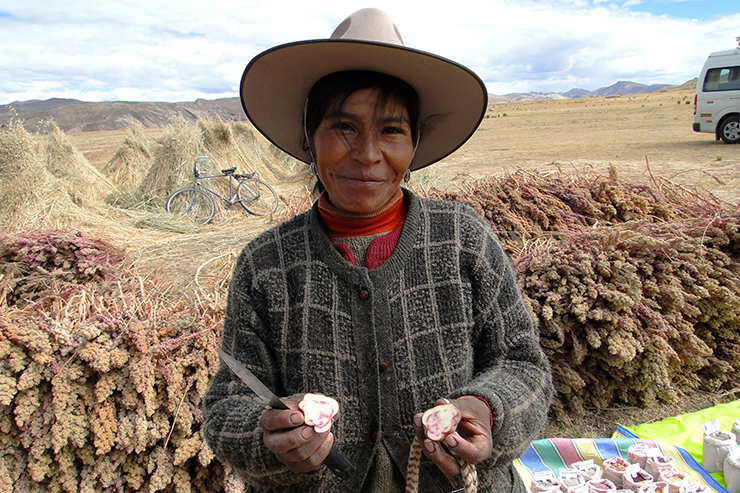 Globally Important Agricultural Heritage Systems (GIAHS) in Peru. Andean agriculture is one of the best examples of the adaptation and knowledge of farmers to their environment over the last 5,000 years or more. This indigenous knowledge can provide a rich source of inspiration for climate adaptation. © Liana John/FAO

Despite financial pledges and rhetoric on the importance of climate adaptation for vulnerable nations, the lack of tangible finance flows tells a different story. If the most at-risk communities are to adapt before it’s too late, we must unblock adaptation finance now

We already live in a climate-changed world. The recent Intergovernmental Panel on Climate Change (IPCC) special reports warn us of the increasing frequency and magnitude of climate hazards. Extreme weather events are now the ‘new normal’. The IPCC‘s Special Report on 1.5°C presents a stark picture of the much higher risks for natural and human systems of global warming of 1.5°C compared with current global temperatures. At 2°C, the risks to those systems are yet higher.

The IPCC argues that these risks depend on the magnitude and rate of warming, geographic location, levels of development and vulnerability, and on the choices and implementation of adaptation and mitigation options. However, the impending emissions pathway points to a global temperature rise far above that pledged at Paris in 2015. Even if all the collective commitments under the 170 submitted nationally determined contributions (NDCs) are fully complied with, the world will witness warming of 3°C.

Climate impacts have temporal and spatial dimensions. Because of the ratchet effect caused by previously emitted greenhouse gases, the future impacts will be much more severe. Developing countries will overwhelmingly bear these impacts. The foremost victims are the small island developing states (SIDS) and the least developed countries (LDCs).

Many of these countries can be regarded as ‘nano emitters’ with the least capacity to adapt. Oxfam’s 2019 report, Who takes the heat? Untold stories of climate crisis in the Horn of Africa and Mozambique, shows that while climate impacts are likely to cause an average reduction of about 0.4 per cent of developed countries’ GDPs, the reduction for low-income countries (LICs) will be almost 2 per cent. Climate impacts are likely to push an additional 100 million people into poverty by 2030. LICs’ geographic location and their low level of development combine to increase their vulnerability.

Here is the rationale of support for climate adaptation for these countries. The basic provisions of the United Nations Framework Convention on Climate Change (UNFCCC), such as Articles 3, 4.3 and 4.4, and Articles 9.1, 9.5 and 9.7 of the Paris Agreement, impose obligations on developed countries to provide climate finance transparently to developing countries.

Preferential treatment should be given to the SIDS and LDCs. Articles 4.3 and 4.4 provide for assistance with “new and additional… adequate and predictable” finance, particularly for meeting the costs of adaptation. These provisions implicitly refer to the ‘polluter pays’ principle.

As a response, developed countries pledged $30 billion as ‘fast-start’ finance during 2010–12 and $100 billion a year by 2020, subsequently shifted back to 2025. But the availability of support is orders of magnitude smaller than the needs estimated by various agencies, which range from $86 billion to more than half a trillion dollars a year.

Reports from the Organisation for Economic Co-operation and Development show the availability of around $60 to $70 billion a year from both public and private sources. But research from Oxfam shows that countries in need have received less than $10 billion during the last decade from UNFCCC funds including the Green Climate Fund (GCF). Oxfam’s calculations also show that LDCs are receiving just $2.4 to $3.4 billion a year in adaptation finance – or the equivalent of less than one cent per person per day. A Himalayan gulf between the claimed delivery and actual receipts continue to damage mutual trust.

The International Institute for Environment and Development shows that only 10 per cent of adaptation finance reaches the local level – or just 2 per cent of the global total of climate finance flows from developed to developing countries.

More disquieting is the fact that grants account for only a third of bilateral climate finance, and a paltry 10 per cent of multilateral funding.

The delivery of adaptation finance is also extremely fragmented: the number of public and private financing channels range from 99 to over 500, including more than 20 multilateral funds. There are too many overlaps, necessitating huge transaction costs and generating frustration both at the delivery and receiving ends. All this compromises the effectiveness of adaptation finance support.

A further frustration is that the long-agreed principles of climate finance under the UNFCCC, such as that financing should be “new and additional” have been totally diluted, with no signs of their resuscitation. Climate finance has been an extremely rancorous issue in UNFCCC negotiations since the $100 billion pledge of 2010. But the absence of an agreed understanding of what climate finance is, accompanied by persistent opposition by many developed countries, gives those countries the wiggle room for creative accounting.

The decision rule adopted at COP24 on reporting of climate finance under Article 9.7 is relatively permissive, allowing countries to report the full value of loans, rather than the ‘grant equivalent’ share as climate finance. So the double – or triple – counting of the same money, or the repackaging of development assistance as climate finance, continues.

Looking through the lens of justice and equity, we can firmly conclude that adaptation finance is failing us totally.

As power manufactures consent from the weak, developing countries have had to forego any option of claiming compensation. Climate governance, rooted in neoliberal values, presents distinct challenges.

Within the post-Paris context, we are witnessing the further neglect of distributive justice as a guiding principle. This allows the naked pursuit of short-term self-interest, the de-emphasising of public responsibility in favour of the market and private sector, a focus on transparency without robust systems of accountability, and exclusive decision-making processes in which core decisions are increasingly made bilaterally between powerful states outside the consensus-based UNFCCC process. This has resulted in harping on voluntary action, and a growing emphasis on leveraging private finance and market-based strategies.

Finally, we have some suggestions for COP26 on how to scale adaptation finance and improve its effectiveness: