The transition to a cleaner economy

What mechanisms, on national and global levels, can be deployed to ensure that both private and public investment is directed towards green growth? 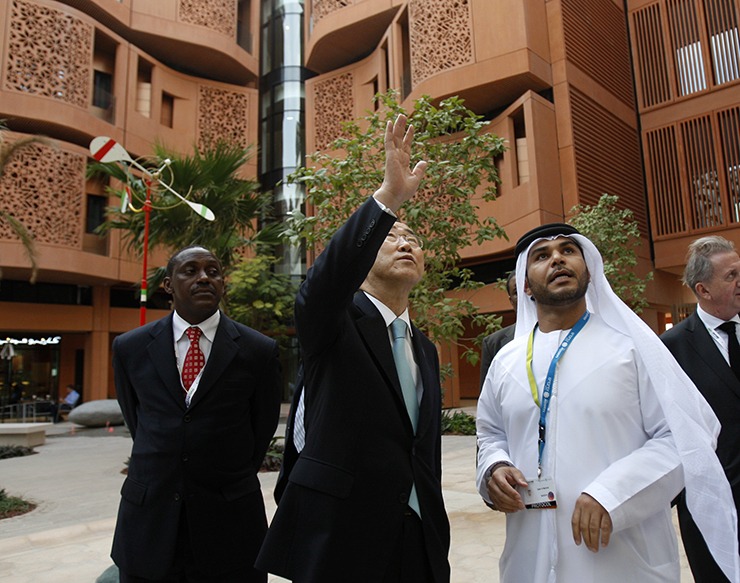 UN Secretary-General Ban Ki-moon tours Masdar Institute of Science and Technology in Masdar City, Abu Dhabi. Masdar City is a zero-carbon development that is designed to be a hub for clean-tech companies.  © Jumanah El-Heloueh/Reuters

The transition to a cleaner economy

What mechanisms, on national and global levels, can be deployed to ensure that both private and public investment is directed towards green growth?

Over the next 15 years, the world economy will experience a massive transition. In developing and emerging economies, major investments will be needed to eradicate poverty, provide access to energy and clean water, and ensure liveable cities. In parallel, developed economies are embracing programmes of structural change, recognising that the old growth models that led to the economic crisis are no longer sustainable. At the same time, people, businesses and governments are recognising the enormous economic and social risks associated with a changing climate and the need to urgently shift towards low-carbon and climate-resilient growth paths.

Thankfully, future economic growth does not have to copy the high-carbon, unevenly distributed model of the past. Countries at all levels of income now have the opportunity to build lasting economic growth and reduce the immense risks of climate change at the same time.

The Better Growth, Better Climate report of the New Climate Economy project finds that we need to invest approximately $90 trillion in infrastructure worldwide by 2030 to meet development needs. The report demonstrates how recent technological developments (such as dramatically falling costs of renewable energy), as well as opportunities to save money (e.g. through the design of compact and connected cities), mean that the investment needs could be about the same whether we follow a high-carbon, polluting pathway or an efficient, healthy, low-carbon pathway. But we need to invest well and make the right choices now.

Investment for better, low-carbon growth
There is an enormous potential for profitable investment in greater efficiency, structural transformation, and technological change in cities, energy systems and land use. The New Climate Economy has found that meeting a low-carbon path consistent with the internationally agreed goal of keeping global average temperature rise below 2°C will require less than an additional five per cent in upfront investment compared to the business-as-usual scenario. Lower operational costs, for example, and reduced fuel expenditures through a transition toward clean energy, could offset these additional investment costs and lead to net savings of $1 trillion to 2030, again compared to the business-as-usual scenario.

Financing the transition to a better and greener economy will require decisive, early and ambitious action. With the right policies, governments can achieve the necessary investments in low-carbon infrastructure and reduce the risks of expensive stranded assets – i.e. assets that are no longer able to earn an economic return as a result of changes in the market and regulatory environment. If done correctly, the low-carbon transition will result in a win-win scenario for economic development and the planet.

The New Climate Economy has found that win-win actions that simultaneously boost growth and reduce climate risk could account for at least 50 per cent, and potentially as much as 90 per cent, of the emissions reductions needed by 2030 to put us on a pathway to keeping global warming at safe levels. However, if action is delayed or governments continue to send mixed signals, for example through subsidising fossil fuel use and production, the costs of this transition and the risk that existing or new infrastructure will need to be prematurely scrapped will increase.

Minimising the risks of asset stranding
With the right policies, the risk and costs of asset stranding will be minimal. The New Climate Economy estimates that even including stranded asset costs, the full investment impact of a low-carbon transition in the electricity sector would be a net financial benefit of up to $1.8 trillion from 2015 to 2035.

The Better Growth, Better Climate report highlighted the particular importance of moving away from coal-powered energy generation. Across all fossil fuels, coal holds the largest emissions-reductions potential. Reducing coal use could achieve nearly 80 per cent of the fossil fuel-related CO2 emissions reductions in a low-carbon scenario. It is also particularly damaging to health, with coal-burning one of the major contributors to the seven million people dying prematurely each year as a result of air pollution. The progressive phase-out of coal plants in the developed world could minimise asset stranding and successfully meet the International Energy Agency’s low-carbon scenarios.

In the United States and Europe, many coal plants are being closed rather than upgraded to meet new air pollution regulations. Over the next few decades, many more coal-fired power plants could be retired as they reach the end of their natural lives or as they are no longer economically viable.

For governments, the best way to minimise the cost of asset stranding is to send clear and unambiguous policy signals about future economic direction. Currently, ambiguity in many governments’ energy policies creates high uncertainty, which reduces jobs, investment and growth. Strong, predictable carbon pricing would make clear that high-carbon assets are risky and create a robust business case for investment in a low-carbon economy. Transparent and mandatory disclosure on the carbon exposure of companies and investments would be an important step towards better understanding and managing such risks.

Mechanisms for green financing
Much of the investment needed for low-carbon infrastructure could be delivered through existing mechanisms with the help of supportive policy and market signals. Some additional investment will require new, efficient finance structures. Governments can support the direction of private finance through regulation, incentives, co-investment, risk-sharing instruments and other policy measures.

In high-income countries, various finance tools have been used in recent years to provide investors direct access to low-carbon infrastructure, including YieldCos, municipal finance, and green bonds. YieldCos, for example, focus exclusively on owning and operating portfolios of renewable assets that are largely free of fuel, market and technology risks, providing investors with predictable revenues over 15 to 20 years.

Meanwhile, green investment banks are becoming increasingly important for low-carbon finance. While they currently account for only a small portion of the financing landscape, green banks have been successfully leveraging private capital and proving that low-carbon investment can be profitable. For example, the UK Green Investment Bank expects to earn taxpayers an average return of eight per cent per year. It is estimated that such financial instruments could reduce the financing costs for low-carbon electricity by 20 per cent.

In middle-income countries, public capital can play a key role in lowering finance costs, which are otherwise so high that they obscure cost advantages from lower labour and construction costs.

For example, it is estimated that the cost of financing in India can add between 24-32 per cent to the cost of renewable energy. However, there are encouraging developments among a number of middle-income countries, for example the significant investments by the Brazilian Development Bank in renewables, and successes in China in providing low-cost, long-term debt for clean energy.

In low-income countries, policy and government instability and lack of financial capacity can be major barriers for investments in energy systems and infrastructure, such that multilateral banks and development finance institutions need to play a much more crucial role.

Platforms such as the Green Climate Fund, Sustainable Energy for All, and the Climate Finance Innovation Lab focus on the particular demands of low-income countries by funding adaptation and mitigation actions, designing specific equity funds, etc. While climate finance will make up only a small part of the total financing needs for sustainable infrastructure, if used wisely its funds could be a catalyst for, and critical complement to, further public and private finance.

Globally, a mix of financial innovation, greater targeting of development bank finance and concessional debt, and increased development capital flows into low-income countries will be essential. Regulators and investors should work together to develop financing arrangements and industry structures that better suit the characteristics of low-carbon assets in different geographies. With the right regulatory regime and financial intermediation in place, the apparent ‘riskiness’ of low-carbon assets is likely to prove to be lower than that of the more volatile fossil fuel assets.

The opportunities to drive economic growth and climate risk reduction together are enormous, but time is not on our side. The next 10 to 15 years will be critical. If governments commit to a low-carbon economy, act quickly, and implement effective financial mechanisms, they can maximise the economic benefits while minimising the financial and social risks. Now is the time to seize these opportunities.