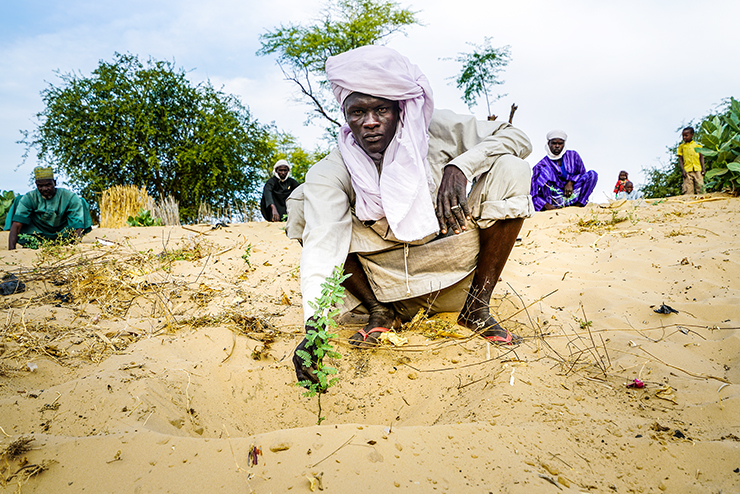 Planting seedlings to combat desertification in Merea, Chad. In the past 50 years, the Lake Chad Basin shrank from 25,000 to 2,000 square kilometres, jeopardising the livelihoods of 30 million people living in the surrounding regions. Most CO2 removal techniques, on which net-zero goals depend, are found in the land sector. © UNDP Chad/Jean Damascene Hakuzimana

The year 2021 will be another big year in the world of climate diplomacy. Governments will gather in Glasgow, Scotland for the delayed 26th Conference of the Parties (COP26) to the United Nations Framework Convention on Climate Change (UNFCCC).

There is a lot of work to be done. The COP21 Paris Agreement established three overall goals. First, to hold global warming to well below 2°C above pre-industrial levels, and to pursue efforts to limit warming to 1.5°C. Second, to increase the ability to adapt to the adverse impacts of climate change and foster resilience and low greenhouse gas (GHG) emissions development. And third, to make finance flows consistent with low-emission and climate-resilient development pathways.

To support the first – the long-term temperature goal – governments also agreed to achieve a balance between emissions and sinks of GHGs arising from human activity in the second half of the 21st century. Net-zero goals by mid-century have now been adopted by many individual countries and organisations.

While the long-term temperature goal attracts the greatest attention in developed countries, the adaptation and finance goals are of equal, if not greater, importance to many developing countries. Indeed, the goals are connected. If the promise of raising $100 billion a year in financial flows from developed countries to countries vulnerable to the effects of climate change cannot be met, the trust needed to secure mitigation commitments compatible with the long-term temperature goal may be beyond reach.

This challenge notwithstanding, the Intergovernmental Panel on Climate Change (IPCC) has found that meeting the long-term temperature goal and achieving the net-zero goal require an immediate start to reductions in global emissions. Carbon dioxide (CO2) emissions must fall by about 45 per cent by 2030 and be net zero by the middle of the century. But the reality is that global emissions have at best levelled off and, at worst, are still on an upward trend.

This is not to say that all is negative. Many parts of the world have been successful in bringing down power-sector emissions by backing out of coal and investing in renewable energy. This has been helped by dramatic falls in the cost of renewables, notably solar and offshore wind, which can compete with conventional fossil-fuel plants in many jurisdictions. There are also promising signs of a revolution in private transport, with electric vehicles (EVs) picking up market share in many parts of the world. Several countries now have targets for phasing out conventional internal-combustion-engine vehicles.

The problem is that clean power and EVs by themselves are not enough. Recent IPCC reports have emphasised that major changes are required in all systems – infrastructure, the built environment, industry, freight transport, aviation, shipping and, critically, the land and agricultural sectors. In these areas, there has so far been little progress. Unless there is a rapid, wholesale scaling up of efforts across all of these systems – drawing on lessons from power generation and private transport – then the Paris Agreement goals will increasingly be beyond reach.

Another essential element of a transition towards net zero is moving beyond emissions reduction to enhance and develop carbon sinks that draw CO2 from the atmosphere. Net zero does not mean that emissions in all sectors drop to zero: it means balancing unavoidable emissions with CO2 removal.

Most CO2 removal techniques are found in the land sector. Some, such as afforestation and the use of bioenergy combined with carbon capture and storage (CCS), have attracted controversy. This is because at large scale they could involve the conversion of large areas of land, with consequences for food security and biodiversity. However, if applied at more modest scales with the right crops and good management, they have an important contribution to make to the net-zero goal. And there is also a wider range of ‘nature-based solutions’, such as mangrove and peatland restoration and re-building soil carbon through sustainable agricultural practices. Individually, none of these has the technical potential of afforestation or bioenergy with CCS, but collectively they can make a material contribution to climate-change mitigation.

This shows how climate change cannot be addressed in isolation. The landmark Rio Conference in 1992 spawned three international conventions: not only the UNFCCC, but also the UN Convention on Biological Diversity (UNCBD) and the UN Convention to Combat Desertification (UNCCD).

The IPCC’s Special Report on Climate Change and Land highlighted the intertwined nature of the three UN Rio conventions. It identified many actions that can simultaneously mitigate climate change, halt or even reverse land degradation, and enhance biodiversity and food security. Demonstrating this interconnection, the IPCC will convene – jointly with its sister UN assessment body, the Intergovernmental Science-Policy Platform on Biodiversity and Ecosystem Services (IPBES) – a shared workshop on biodiversity and climate change.

A further consideration in working towards net zero is the concept of ‘just transition’ – highlighted by the Polish Presidency of COP24 in 2018. This embodies the idea that the transition to net zero should be fair for all and not leave people and communities behind. It can be viewed through the lens of human rights, linking it closely to yet another UN process. Most concerns about just transition have focused on the impact that reduced demand for fossil fuels, particularly coal, could have on specific regions and communities. The use of the concept is expanding to cover a wider set of issues relating to other sectors, including land and agriculture, and to impacts on consumers and society more generally. The concept of just transition can also be applied in a positive sense to cover the potential role of the green economy in advancing high-quality employment opportunities.

In summary, 2021 will be a critical year in terms of advancing climate action. Actions taken on the ground still fall well short of what will be required to meet the aspirations of the 2015 Paris Agreement, but there are encouraging signs that some efforts are starting to bear fruit.

Carbon is ubiquitous throughout society and concepts such as just transition help us to understand that technical fixes will not be enough. The interconnection with other environmental imperatives such as biodiversity and food security provides a further compelling case for action. For the UK, COP26 presents a unique opportunity to propel the global agenda.

This article is written in a personal capacity.