The catastrophic effect of climate change on mass migration is undeniable. How can governments protect migrants and the communities that give them refuge? 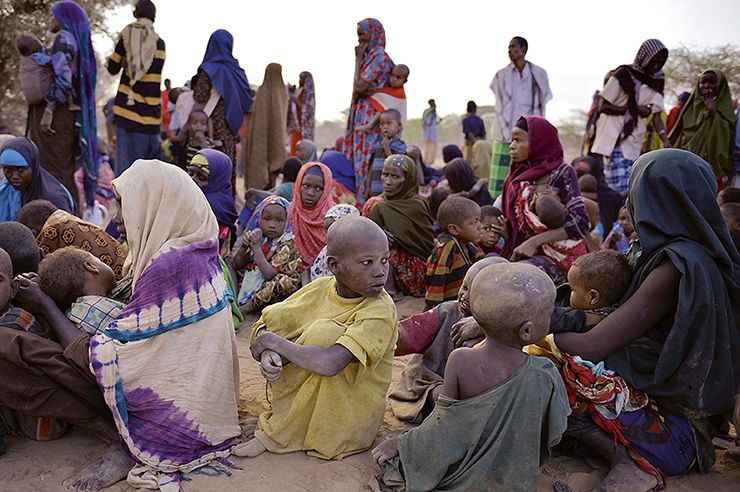 Somalis wait to be registered at the Dagahaley refugee camp in Dadaab, Kenya in 2011. Almost 300,000 Somalis ended up in refugee camps in neighbouring countries due to prolonged drought then famine.
© Tony Karumba/AFP/Getty Images

The catastrophic effect of climate change on mass migration is undeniable. How can governments protect migrants and the communities that give them refuge?

When heads of state and government meet on 19 September 2016 in New York for the United Nations Summit on Refugees and Migrants, some of the participants are likely to raise the fate of those who are forced to leave their homes in the aftermath of disasters such as windstorms or flooding. Others will no doubt seek to highlight the plight of those who, to cope with the adverse effects of climate change, decide to migrate from rural to urban areas or even to other countries in search of livelihoods and better living conditions.

Such interventions will be timely. On average, 26 million people are newly displaced every year by disasters of various kinds. Most flee when hit by weather and climate-related natural hazards. Others choose to migrate to cope with the slow-onset, adverse effects of climate change, such as rising sea levels, recurrent drought or desertification.

Most people move within their own country. In Bangladesh, for instance, almost every big city hosts significant numbers of families from vulnerable coastal areas. These people are struggling to find a living among the urban poor, after their land was washed away or salinisation of groundwater and soil made life too hard. In Kenya, Haiti and the Dominican Republic, the International Organization for Migration found that rural-urban migration is the predominant answer to slow-onset environmental degradation.

Other people try to find security and livelihood opportunities abroad. Almost 300,000 Somalis were accepted as refugees in the big refugee camps in Kenya, Ethiopia and Djibouti, when a prolonged period of drought turned into famine in 2011-12. When floods in Mozambique’s river basins force people out of their homes and villages, displaced communities in border areas regularly find refuge in Malawi.

Overall, the number of people displaced across borders in the context of disasters and environmental degradation is unknown. These people are not counted because the adverse effects of climate change are not recognised as a valid ground for receiving state protection from the country they are forced to move to. Thus, those arriving over the Mediterranean Sea from the Horn of Africa or the Sahel region, for instance, are unlikely to declare that they have left their homes for any reason other than to escape persecution.

Displacement and migration may be temporary, with people returning when the situation improves. In cases where affected people have given up hope of rebuilding dignified lives in their country of origin, they may opt for permanent emigration.

Temporary migration can often have positive effects. It can allow people to work abroad during periods of instability, for instance when there is increased food insecurity. It can allow them to send money home to their family, or bring back new knowledge that enhances the resilience of their communities.

However, pre-existing vulnerabilities are further heightened where migrants fall prey to trafficking, exploitation or marginalisation, or where particularly vulnerable families and communities are left behind with no support. In other situations, people in the most desperate circumstances may lack the resources to migrate, forcing them to remain in unsafe areas despite further massive deterioration of their lives.

Multi-causality
Natural hazards alone rarely force people to move. The 2011–12 famine in Somalia provides a good example of how natural and human-made factors combine when people are forced to flee. Affected communities in Somalia had to be protected abroad because after two decades of armed conflict, no authorities were able to assist them at home. Food aid could not reach them at their places of origin, primarily because of the prevailing insecurity, but also because the international community was not quick enough to act, despite early warnings that famine was imminent.

Displacement takes place when people are exposed to a natural hazard and lack the resilience to withstand its impacts. Being exposed and lacking resilience are not ‘natural’ factors, but are consequences of human behaviour. Irregular settlements on steep slopes in urban areas or in flood-prone river plains and coastal areas clearly increase the risk of being displaced during heavy rainfall.

People who are poor, have houses too weak to withstand a storm, experience food insecurity in rural areas or live in densely populated and poorly planned urban neighbourhoods (where corruption can contribute to weak enforcement of building codes) are less resilient than those who can profit from effective disaster risk reduction and climate change adaptation measures.

In a report for the 2015 Sendai World Conference on Disaster Risk Reduction, the Internal Displacement Monitoring Centre correctly stressed that compared to the impacts of the natural hazard itself, demographic, social, economic, institutional and political factors contribute as much – and sometimes even more – to whether affected people can stay or must flee.

This opens up ways to reduce displacement risks through a series of tools, as highlighted by the Nansen Initiative on cross-border induced disaster displacement in its 2015 Protection Agenda. These include, in particular, disaster risk reduction; climate change adaptation measures and other efforts to strengthen the resilience of communities at risk; planned relocation; and the facilitation of migration as a means to cope with the realities of disasters and the adverse effects of climate change.

The way ahead
Despite all these efforts, disaster and climate change-related displacement and migration will increase, as UN Secretary-General Ban Ki-moon highlights in his report to the UN Summit on Refugees and Migrants. He notes that hazards related to climate change and environmental degradation will intensify and are, among others, likely “to drive people away from coastal areas and low-lying small-island states”.

This prospect calls for the development of policies to protect such people and allow them to integrate in host communities in ways that take into account the legitimate interests of both host and migrant. Such policies should be guided by the principle that no one shall be left behind.

This is the strong message of the Sustainable Development Goals (SDGs). Together with human rights standards, many of the SDGs provide extensive guidance on how best to address disaster and climate change-related displacement and migration.

Who can take this challenge forward? While it is unlikely that the 19 September summit will address this issue in any depth, two processes are relevant. In December last year, COP21 in Paris agreed to create a task force under the Warsaw International Mechanism for Loss and Damage “to develop recommendations for integrated approaches to avert, minimise and address displacement related to the adverse impacts of climate change”.

At the World Humanitarian Summit in May of this year, the Geneva-based Platform on Disaster Displacement, a process led by 18 states and chaired by Germany with Bangladesh as vice-chair, was launched as successor to the Nansen Initiative. Its purpose is to address the protection needs of people displaced across borders in the context of disasters and climate change, through promoting the implementation of the Nansen Initiative Protection Agenda.

Both processes are important steps towards the development of policies, rules and standards that will help to live up to  the challenges of climate change-related human mobility.