From disaster to opportunity

With the right support, vulnerable communities can adapt to the escalating effects of climate change. We must do more – now – to help them 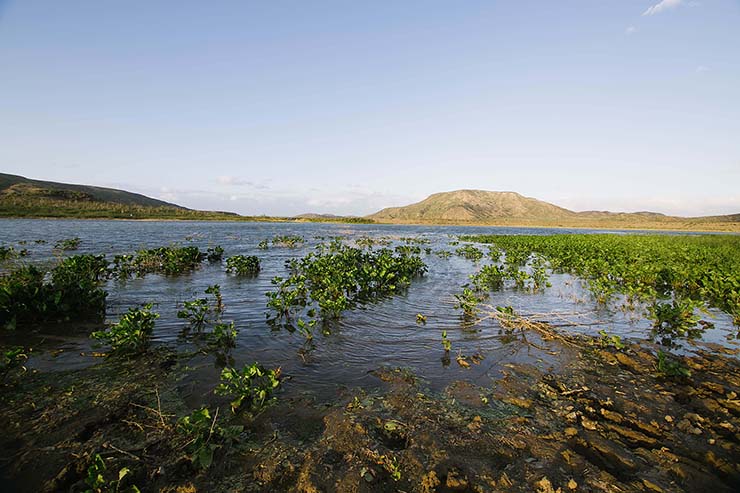 From disaster to opportunity

With the right support, vulnerable communities can adapt to the escalating effects of climate change. We must do more – now – to help them

Much of the talk around climate change focuses on the future. Creating a clean, green and sustainable planet should be everyone’s priority. But we must not forget that climate change is already impacting the lives of millions of people around the world.

Many of the biggest humanitarian crises we face today can – at least in part – be traced back to climate change. Even the smallest changes in rain patterns or water levels can have massive impacts. Stronger and more frequent storms destroy livelihoods and livestock, drought and soil salination cause crops to wither and die, and rising water levels force people to flee their homes and land. Evidence shows it’s the world’s poorest people – women, in particular – that are hit hardest.

Urgent action is needed to not only reduce emissions, but also to make communities more resilient to the impacts of climate change. Whether it’s coffee producers in the mountains of Honduras, rice farmers in Nepal or dairy farmers in Kenya, they are all increasingly vulnerable to the changing climate. But there is a lot that we can do to support them – and if we get it right, these communities can thrive and grow.

Two years ago, Haiti was hit hard by Hurricane Matthew – one of the worst storms the world has ever seen. While many people moved to shelters and prepared to ride out the storm, some of Haiti’s poorest communities were unaware of what was about to happen.

More than 6,500 families that Heifer International works with found themselves in the path of the storm. They spent a number of long, dangerous days and nights taking shelter, trying to keep their families and livestock safe.

Although many lives and livelihoods were lost as the deadly storm made its way north, it also brought new life to the drought-hit community of Cabaret in the north-west of  the country.

Years ago, Cabaret was home to a 25-acre swamp called Mare Verger. The soil around the swamp was good for farming and the fields were packed with squash, pumpkins and enough healthy food to feed local families. But by 2000, water levels in the swamp had already fallen dramatically. Two years of severe drought from 2013 to 2015 made the situation even worse, and it dried out completely. Crops withered and died, and farmers in the community increasingly chopped down the remaining trees to produce charcoal – one of their few sources of income.

Dugat Esaie, a local farmer from Cabaret, describes how the drought made it very difficult to get water for animals and even harder to grow crops: “I used to have to walk miles every day to get fodder and water for my livestock. I tried growing sorghum for part of the year because it needs less water, but I would often lose the harvest because it didn’t rain at all.”

With the trees gone and the topsoil washed away, the swamp became caked in mud that set hard like cement. After the 2010 earthquake, Heifer International had started working with the community on a range of income-generation activities. But plans to produce fodder and food crops failed, as the soil was completely leeched of nutrients. It was clear that the key to tackling hunger and improving food security in Cabaret lay in supplying water to the farming families, who were spending hours every day walking long distances just to get enough to drink.

A plan was put together to turn the old swamp into a lake which, when full, would have the capacity to irrigate 250 areas of farmland. Heifer provided the funding to re-dig the lake, and rainwater harvesting would keep it topped up. But a large supply of fresh water was needed to get it up and running. That’s when Hurricane Matthew hit.

Despite leaving a trail of death and destruction across the country, when the storm clouds from Hurricane Matthew lifted, people from the community of Cabaret saw that the lake was almost completely full of water. The surrounding land has once again become valuable for growing food, and farmers have boosted their income by selling surpluses in the local markets.

Now that they have water for irrigating their crops, farmers like François Wilman are able to grow sorghum, corn and beans, and can harvest their crops three times a year.

“With the construction of the lake this area has changed completely, because many farmers like me are now able to grow corn, sorghum, beans and fresh vegetables easily with the water from the lake. With increased production, my family has been able to eat more and better food, and my income has increased considerably. Our community as a whole is now much more food secure.”

Much of the farmland is now back in production and the food security of local families has improved, but the lake is also providing much more than water for farming. Hundreds of livestock use it every day, and the community has introduced 5,000 fish, which serve as an important source of protein.

In total, more than 17,000 people are benefiting from the increase in food production linked to the lake. The lake remains at about 70 per cent capacity and the community has dug a network of channels to funnel storm water from the hills into the lake so that it continues to be replenished.

“The last two years have been a blessing for my community,” says Dugat Esaie. “First, more production, income and quality of life of the farmers and their families. Second, no more losing our animals because of lack of water and food. The irony is that the lake was filled completely by Hurricane Matthew and subsequent storms that brought misery and destruction to many other people.”

With the right support, farming communities like the one in Cabaret, Haiti, can adapt to the changing climate, increase their incomes and become more food secure. Farmers raising cows and goats can shift to zero-grazing practices, coffee farmers can diversify their crops to become less vulnerable to pests and disease, and millions of farmers can benefit from adopting climate-smart agriculture practices such as soil and water conservation, and watershed management. These are just a few examples.

Of course, this does not replace the need for strong international processes that reduce emissions, but by working with local farmers to adapt to climate change, they can get the support they need today and be part of the solution to the climate crisis.

Heifer’s mission is to end hunger and poverty while caring for the Earth. For more than 70 years, Heifer International has provided livestock and environmentally sound agricultural training to improve the lives of those who struggle daily for reliable sources of food and income. Heifer is currently working in more than 25 countries, including the United States, to help communities become more self-reliant and lift farming families to a living income.