Much of the technology to help cut GHG emissions already exists or is in research and development. How can we speed up its deployment? 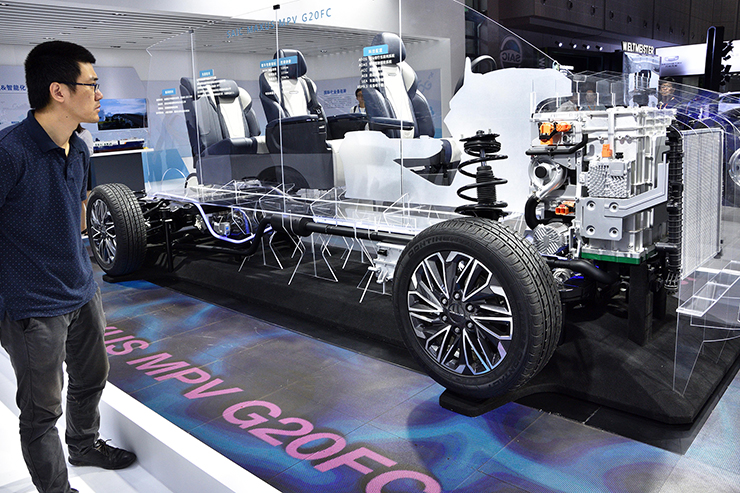 Hydrogen fuel cell vehicle on display at the China International Industry Fair in Shanghai. Governments must give clear, strategic direction to stimulate the private sector to deliver the technological advances needed, as China successfully did with EV technology. © VCG via Getty Images

Much of the technology to help cut GHG emissions already exists or is in research and development. How can we speed up its deployment?

Limiting global average temperature rise to 1.5°C or 2°C above pre-industrial levels, as agreed by world leaders at Paris in 2015, requires deep cuts in CO2 emissions. For a 2°C pathway, emissions must fall by 50 per cent by 2050 compared with 2010 levels. To limit the rise to 1.5°C, we must achieve nearly net-zero carbon emissions by mid-century. The Intergovernmental Panel on Climate Change’s Special Report on Global Warming of 1.5°C identifies that technological progress will play a crucial role in achieving these deep cuts in emissions.

To reduce emissions to around net zero, four areas will be key. First, we must achieve zero emissions in power generation by 2050. Second, end-use sectors must get more of their power from clean electricity and less from burning fossil fuels. Third, we must see big gains in energy efficiency. And fourth, we must increase the carbon sink from land use, land use change and forestry.

To do all of these, we will need to make advances in a wide range of technologies, including: low-cost renewable energy power generation; nuclear power generation; bio-energy with carbon capture and storage; electric vehicles (EVs); fuel cells, including hydrogen fuel cells for aircraft; hydrogen production (for example, from electrolysis or thermochemical processes); using hydrogen instead of coke to reduce emissions in steel-making; IT and artificial intelligence applications in energy use; and demand-side management.

Encouragingly, in the last decade, we have seen significant progress in some of these technologies. For example, the cost of solar photovoltaic (PV) power generation has fallen by more than 90 per cent, making it one of the cheapest forms of power in some parts of the world. In 2019, around 20 GW of new solar PV installed in China did not require any government subsidy.

What’s more, the price of electricity generated by some of these new solar PV power plants is lower than that of existing coal-fired plants.

There are similarly encouraging signs about the economic viability of EV development, including hydrogen fuel cell vehicles. And, last year, steel maker Thyssenkrupp launched a series of tests into using hydrogen in a working blast furnace – a world first.

In China, a project using a similar process, with the capacity to manufacture 600,000 tons of steel a year, will start operation in 2020. These new, green technologies are now beginning to bloom in many areas, offering confidence that we can indeed make the deep emissions cuts needed to meet the Paris targets.

Picking up the pace
Unfortunately, however, the pace of technological change to help achieve the required cuts is still too slow. If we want to realise the goals set in Paris, and preserve our planet, CO2 emissions must peak now and start to fall. We are at a critical moment, and we need to push further and faster on technological development.

Both government and the private sector have critical roles to play. Governments must set a clear strategic objective for reducing emissions. This is crucial for guiding the future direction of technological research and development (R&D).

The EU, for example, is taking a lead on strategic direction, releasing a roadmap towards greenhouse gas (GHG) neutrality by 2050. The EU’s strategy and roadmap present clear signals for the pathways that industry should follow.

The private sector, meanwhile, is best placed to make the tangible technological breakthroughs, investing in R&D and implementation that aligns with the strategic direction set by government.

There are already several success stories that can act as models for future development. Germany and the EU’s policy on solar PV and wind power generation has totally changed the path of renewable energy development. Policy in China from 2015 on EVs has changed the pattern of car development, speeding up EV technology and manufacturing around the world.

International collaboration is important for both technological R&D and implementation. The major emitting countries and regions with the potential for deep cuts in CO2 emissions – including the EU, US, Japan, China, Korea and Australia – could work together much more closely in technological development. For example, the R&D required for nuclear fusion power generation is on such a large scale that it necessitates collaboration by many countries.

For all its impressive work, ITER, an international nuclear fusion research and engineering project, is moving slowly, and it is essential that we speed it up. Perhaps we need to see more collaboration outside ITER – for example, with more technology choices and laboratory testing. But we have little time, so we must work together to make new technologies like this move faster.

Meanwhile, developing countries need technologies to implement cuts in GHGs. Countries that lead on technology must have a clear strategy to help developing nations to use new technologies – and ensure that the technologies they help to develop meet the same high emission standards as in developed countries.

Driving future growth
Time is of the essence. For many countries outside the EU, clear emission-reduction targets and strategies are essential to guide technological investment now.

If we can work together, we have a realistic chance of meeting the Paris targets. However, governments must ensure that action on climate change is a central pillar of national social and economic development.

New technology offers one of the most important ways to boost economic activity through higher efficiency – achieving more with less. The good news is that industries across the board are now beginning to seize on the opportunities that green tech offers, as they see how it can drive future growth. The next 10 years will be critical in making a significant transition to these game-changing technologies.