How green are green bonds?

Green bonds are becoming an increasingly popular financial instrument for generating investment in environmentally sustainable projects. But are they always as green as they could, and should, be? 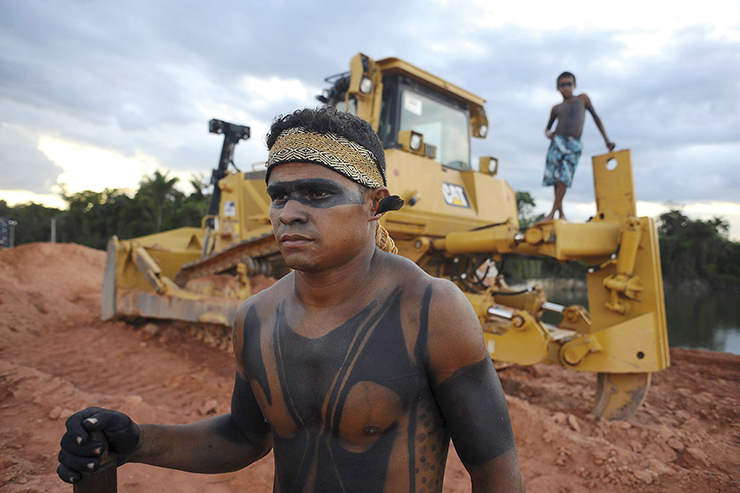 Amazonians protest at the construction of the Belo Monte hydroelectric dam in Brazil. The use of a green bond to fund the controversial Jirau Dam in 2014 raised questions about the lack of scrutiny and regulation.  © Lunae Parracho/Reuters

How green are green bonds?

Green bonds are becoming an increasingly popular financial instrument for generating investment in environmentally sustainable projects. But are they always as green as they could, and should, be?

Green bonds are the new black in the world of environmental finance, generating hype and column inches that have sometimes outshone the market’s growth. Issuance of green bonds – fixed-income securities labelled ‘green’ to indicate they will raise capital for environmental projects – quadrupled in size from 2012 to 2014 to reach some $36 billion, leading to predictions that the market would reach $100 billion in 2015. While these proved wide of the mark, 2016 issuances will again set a new record.

Starting with issues from international public banks, such as the European Investment Bank and the World Bank, green bonds were then taken up by western companies, including private-sector banks. They are now going global, especially thanks to issuances from Chinese and Indian banks.

Investor signal or marketing claim?
Concerns remain among investors as well as NGOs that the ‘green’ claim is open to abuse. Certification schemes like the Climate Bonds Standards have great potential, but have not yet achieved wide uptake.

Meanwhile, widely referenced guidelines such as the industry-led Green Bond Principles, of which BankTrack is an observer, are rather broad and explicitly avoid opining on what is and is not green. Instead the principles point to several broad ‘categories of eligibility’, while making clear that these are neither exhaustive nor definitive. Depending on your point of view, the green label can be described as a signal to investors to aid the identification of green investments, or as an unregulated marketing label, which can be applied as long as the issuer believes they can get away with it.

Despite the clear scope for environmentally egregious investments to be funded by green bonds, the majority of issuances to date have appeared positive and uncontroversial. However, with most bonds financing a range of projects across different industries, coupled with inconsistent availability of data, detailed analysis is challenging. The risk of censure from industry colleagues and civil society alike appears to be the main factor dissuading issuers from taking risks.

The most notable controversy in the green bond market to date came in 2014, with an issuance from GDF Suez (the company since rebranded as Engie). The €2.5 billion bond issuance was the largest corporate bond issued at the time, and among the projects it financed was the Jirau Dam in Brazil.

This massive, already-completed hydropower project has contributed, together with another dam on the same river, to the flooding of 362 square kilometres of rainforest, as well as being associated with labour rights violations, adverse impacts on indigenous communities and destruction of habitat. After strong community resistance against the dam over many years, supported by campaigns by International Rivers, Amazon Watch and Survival International among others, Engie putting green-bond finance into this project was rubbing salt in the wound.

‘Clean coal’ and other ‘green’ projects
Since 2014, there have been some other examples of green bonds financing environmentally dubious activities, but these have been few and far between, and altogether less egregious. Anecdotal evidence suggests that criticism of the GDF Suez bond, from BankTrack among others, has dissuaded some other corporates from coming forward with green bond issuances, particularly where these might meet with controversy.

“Companies are second guessing whether to participate in green-bond markets, as scrutiny by environmental groups raises the bar on what constitutes a climate-friendly security,” reported Bloomberg in March 2016, citing NGO criticism of the bond as a possible reason for lower-than-expected market growth in 2015.1

However, as the market internationalises, there are signs the risk of controversies is again growing. One worrying sign came from the Export–Import Bank of India (Exim), which made its first $500 million green bond issue in March 2015. Scrutiny of the bond revealed that some of its proceeds will go towards the Khulna–Mongla railway line, which will deliver supplies of coal to the proposed, and highly controversial, 1,320 megawatt Rampal power project in Bangladesh.2

The rail line financed by the green bond was one of the reasons for the Rampal project site’s proposed location, close to  the Sundarbans, the world’s largest mangrove forest and a UNESCO World Heritage Site.

This is not the type of project that springs to mind when one thinks of green bonds. According to the Green Bond Principles, green bonds are meant to “finance new and existing projects with environmental benefits”. Yet this railway line is a strategic part of the infrastructure for a coal plant that threatens to make devastating impacts on the local environment.

The news that big, emerging economies like India and China are getting involved in green bonds is crucial for the market’s growth. But the rules of China’s engagement in the green bonds market have also created space for a dangerous development: green bonds for coal.

In December 2015 the People’s Bank of China released its Green Projects Catalogue defining what it considers acceptable use of proceeds for Chinese green bonds, and so-called ‘clean coal’ technologies were included.3

Clean coal is, of course, a grossly misleading oxymoron – even at its most advanced, such technologies only reduce plant emissions, and do nothing to address the massive social and environmental impacts associated with coal mining. Added to this, making coal plants more efficient only extends their life, when closing them is recognised as the only route to restricting global warming to substantially below 2°C.

And the prospect of green bonds for coal is not merely theoretical. The Climate Bonds Initiative (CBI) reported that the inaugural green bond of China’s Industrial Bank, released in early 2016, funded ‘clean coal’ projects with about 26 per cent of its proceeds.4

The CBI has removed this and other green bonds that risk funding coal from its green bonds data, although others are happy to count them towards their green bond totals. But however you work the numbers, the issuance shows that green bonds for coal are now with us, and with further large issuances from China on the cards, more  are likely.

Setting standards and exiting fossil fuels
Meeting the climate target agreed by the international community in Paris last year will require many trillions of dollars to be mobilised to finance a swift transition to a low or no-carbon economy. Bond markets have a significant role to play in this, so the emergence of a large green-bonds market that is genuinely environmentally sound and socially just is urgently needed. Yet the apparent re-emergence of green bonds linked to controversial projects threatens the industry’s reputation.

The harmonisation of China’s green-bond guidelines with international practice, which has to date eschewed finance for ‘clean coal’, may come in due course. But there is also a risk of contagion – other countries potentially following China’s lead as they join the market – that could be hugely damaging. The development of robust and widely accepted standards for green bonds, which effectively prevent them raising finance for fossil-fuel and large hydropower projects as a bare minimum, is urgently needed.

It is also important to remember that genuinely green bonds can only be issued by genuinely green banks. Even as green finance becomes the new black, many of the same banks that boast of their growing role in issuing and underwriting green bonds are at the same time ensuring that finance continues to flow towards the ‘old black’: coal and extreme fossil-fuel projects.

Last year, the journal Nature Climate Change published a striking graph  showing how the majority of the most active banks in the green-bond market provide much greater financing to coal-based activities.5 Without urgent action to curb fossil-fuel finance across the whole of banks’ balance sheets, a burgeoning green-bond market will be no defence – rhetorically or physically – as the floodwaters begin to seep into lobbies on Wall Street by mid-century.