Buildings and the building sector are one of the primary contributors to GHG emissions, but the solution shouldn’t just focus on new builds: upgrading existing buildings also offers huge potential 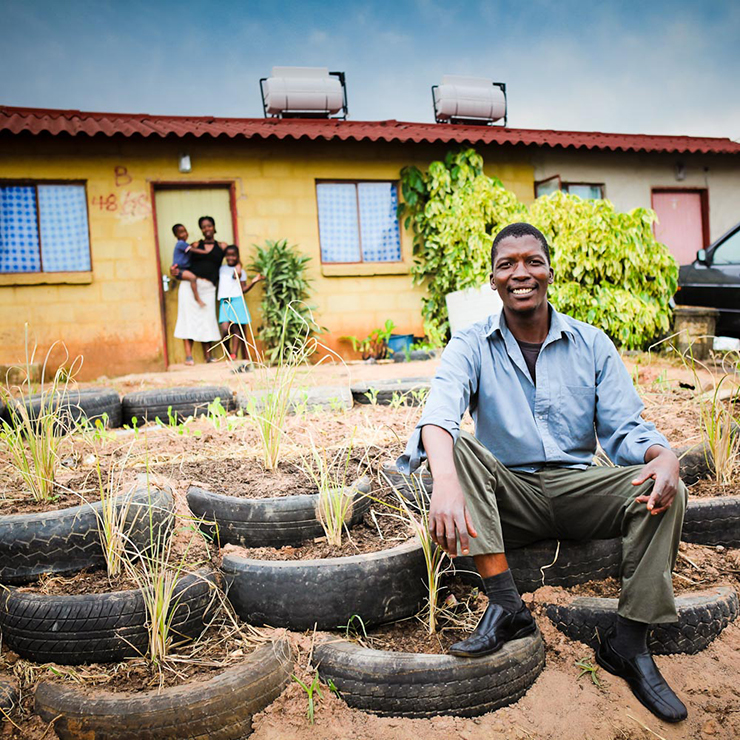 Residents outside their home in the Cato Manor township of Durban, South Africa, after the green retrofit.
© SAGBC

Buildings and the building sector are one of the primary contributors to GHG emissions, but the solution shouldn’t just focus on new builds: upgrading existing buildings also offers huge potential

In 2011, ahead of the COP17 talks in Durban, 30 low-cost houses in a small cul-de-sac in Durban’s historic township of Cato Manor gained a green upgrade.

Led by the Green Building Council of South Africa (GBCSA), in association with the World Green Building Council (WGBC), and primarily funded by the British and Australian High Commissions, the project aimed to demonstrate the range of socio-economic, health and environmental benefits that can be captured through resource-efficient interventions in low-income houses.

Being deeply involved in the project, I saw first-hand how green retrofits can improve people’s quality of life, while keeping my country’s development on a low-carbon pathway. Green interventions, such as solar water heaters, insulated ceilings, heat insulation cookers and efficient indoor lighting, were found to deliver a far higher return on investment to the public purse than similar investments in new electricity generation capacity would.

In fact, if green retrofits similar to those at Cato Manor were undertaken for South Africa’s roughly three million existing government-developed low-cost houses, the reduced consumption of electricity and water would save around 3.5 million tonnes of carbon dioxide each year – as well as saving more than €250 million. The retrofit programme would create nearly 40 million person days of work and put money back into the pockets of those who need it most. This case study illustrates why simple retrofits should be considered an international investment priority.

While green buildings can deliver on the triple bottom line for companies, they also generate society-wide and economic benefits that can contribute to ‘macro’ priorities of governments – such as climate change mitigation, energy security, minimising spend on new power infrastructure and reducing dependence on oil imports. Arguably, buildings offer the single largest opportunity to reduce emissions – and at the least cost.

Scaling-up energy efficiency in buildings can also help governments to deliver on social priorities such as employment and health, while maintaining economic growth and improving the quality of life in our cities.

A defining feature of any green building project is reduced energy consumption – and the consequent savings on energy costs. The WGBC’s Business Case for Green Building (2013) found that reductions in a green building’s energy use compared to a conventional code-compliant building range from 25-30 per cent (based on buildings certified by the Leadership in Energy and Environmental Design – LEED – rating systems in the US) to up to 50 per cent (based on a similar study of green buildings in New Zealand). Halving energy bills will become even more attractive as energy costs continue to rise.

The current evidence finds that energy savings for green building retrofits are not as high as those for new builds, but are nevertheless substantial. For example, a study of buildings in Singapore found buildings that underwent green retrofits made a subsequent saving of 17 per cent on energy costs. Transwestern, a private real estate firm in the US, reports typical savings of up to 15 per cent on the utility bills on its managed properties that have undergone energy performance upgrades. These retrofit measures range from thermal envelope improvements, improved controls and renewable energy installations, through to upgrades of lighting, heating and ventilation, and mechanical systems.

However, energy savings are just a small part of the story. Health, Wellbeing and Productivity in Offices: The Next Chapter for Green Building (2014) finds improvements in air quality alone can boost productivity by around 10 per cent. When staff costs, including salaries and benefits, typically account for about 90 per cent of a business’s operating costs, what may appear a modest improvement in employee health or productivity can have a huge financial implication for employers – one that is many times larger than any other financial savings associated with an efficiently designed and operated building.

Partnership is the new leadership
In March 2015, green building councils across Europe launched an ambitious €2.35 million project to support governments’ design and implement national renovation strategies that many nations have so far struggled to deliver in accordance with European Union law. Eighty key organisations from 24 countries are taking part in BUILD UPON, an innovative two-year project, funded by the EU’s Horizon 2020 programme, that aims to drive the design and implementation of a long-term framework for scaling-up deep energy-efficient renovation in 13 countries.

EU countries were required to deliver long-term renovation strategies to Brussels in accordance with the Energy Efficiency Directive by 30 April 2014, a deadline which most missed, with many of the strategies now in place falling short of the requirements of the Directive. Countries now have until 30 April 2017 to strengthen and resubmit their strategies to Brussels. With the European Commission’s ‘Energy Union’ placing a renewed focus on full implementation of EU energy efficiency in buildings law, the next two years will be crucial for countries to put in place an ambitious and feasible framework for deep renovation.

Emilio Miguel Mitre, BUILD UPON’s Coordinator and Director of International Affairs at GBC España, has said: “Governments across Europe have an extremely difficult task in having to define a strategy to scale-up energy-efficient renovation, and provide the finance and instruments to help achieve this scale.

Retrofitting our buildings can power jobs and economic growth, but buildings don’t renovate themselves. Green building councils are uniquely placed to make this happen, and the WGBC understands implicitly that partnership is the new leadership.

Whether or not climate negotiations and emissions trading systems achieve their objectives, we must embrace retrofitting for its own sake – because it makes economic, social and environmental sense.