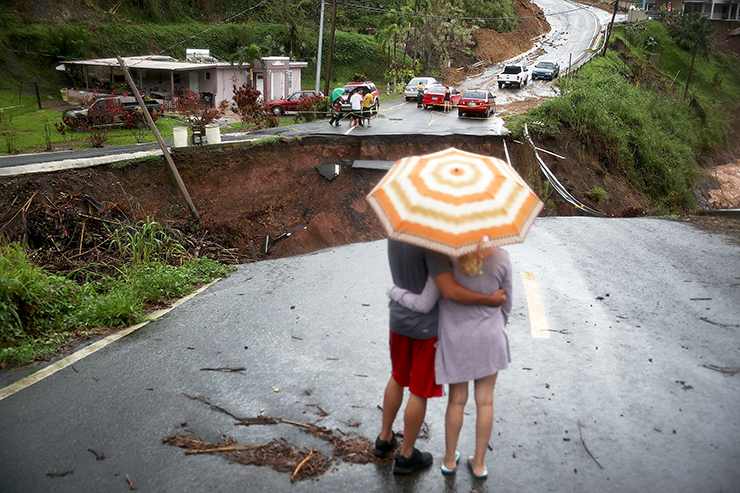 Barranquitas, Puerto Rico: destruction in the wake of Hurricane Maria. As the frequency and severity of extreme weather events increase, the resilience of existing infrastructure needs to be enhanced  © Joe Raedle/Getty Images

Current estimates suggest that over the next 15 years, global infrastructure requirements will cost at least $90 trillion. The Global South will account for about two thirds of that, just to meet urbanisation and population growth needs. Business-as-usual trends suggest that only about 80 per cent of that will be funded, although this varies substantially by continent. By contrast, achieving Sustainable Development Goal 6 – full access to clean drinking water and sanitation – would add a relatively modest $3.5 trillion.

But these numbers do not tell the whole story. Climate change means that existing infrastructure, which may seem good enough when judged on past conditions, simply isn’t designed for the future. The gap in infrastructure is therefore a combination of projected needs, to achieve sustainable development, and increasing the resilience of infrastructure that is already built. There will need to be a whole lot of building if urban populations are to have basic services and be reasonably climate safe.

Infrastructure choices are also implicated in the ability to meet the goals set out in the Paris Agreement. There is broad consensus that infrastructure should include emission-reducing renewable energy, mass transit rather than roads, and energy efficiency in buildings. The materials used matter as well. Cement production accounts for five per cent of annual global greenhouse gas (GHG) emissions. A traditional approach to construction will only increase these levels. For example, protecting seaports from climate change would require 49 million tons of it. Meanwhile, trees and marshes store carbon, and other urban green space tends to be carbon neutral.

Hybrid projects
In recent years there has been an increase in what are called ‘hybrid’ infrastructure projects to improve coastal resiliency. These are projects that combine traditional grey structures with ecosystem and non-structural approaches. A good real-life example of a simple hybrid project is the addition of mangrove plantings to the rebuilding of a major roadway connecting Kingston, Jamaica, with its airport. The mangroves will serve as fish nurseries – good for the fish but also for the local fishermen – and will absorb some wave energy before waves hit the roadway.

Another, moderately complex, project was the 2015 construction of a new boardwalk on the touristic south coast of Barbados. Poorly designed jetties and other interventions had brought significant beach erosion. Hotel occupancy suffered as the beach eroded, with multi-storey buildings going vacant. The government could have responded by adding sand and sea walls, which would have been a quick but short-term fix. Instead, it selected a hybrid, soft shoreline approach using appropriate shoreline stabilisation and an integrated, well-designed boardwalk, which is slightly raised to allow for natural sand movement and sea-level rise.

The resulting boardwalk and beach are extremely pleasant and popular with both residents and visitors. Reinvestment has been steady as hotels recover and renovate. Hawksbill and leatherback turtles have been given protected areas of beach for nesting.

More complex projects are needed for larger areas. In the Caño Martín Peña neighbourhood in San Juan, Puerto Rico, for instance, thousands of residents lack connection to basic water and sanitary systems, and experience repetitive flooding during any major rainstorm. Plans call for green infrastructure such as floodable parks and bioswales to increase stormwater infiltration while providing public gathering spaces on dry days. Such green infrastructure reduces but does not eliminate the need for traditional sewer and water piping. Non-structural plans revolve around an active community-created land trust. The trust ensures that those who need to be moved out of the most flood-prone areas can get re-housed in the neighbourhood. More generally, it means that the improvements won’t lead to gentrification displacing existing residents.

Hybrid projects have the potential for strong co-benefits far beyond the technical goals of structural approaches. Ecologies can be enhanced and shorelines protected with the addition or preservation of natural systems. These can be highly climate adaptive. New research is showing that if shorelines can have space over time, the dunes will add height and the salt marshes will move inland, building in climate resilience. Hybrid projects usually have lower embodied energy than their fully structural alternatives, as plantings are substituted for some concrete. And social benefits can be incorporated within the design fairly easily, improving land tenure security, local jobs and public health.

Change is hard
So if these kinds of projects are so great, why do many coastal and flooding projects still reflect standard structured engineering approaches? The most often-cited reason is cost, but there have been several studies to show that greener projects are, in fact, cost-competitive. A lack of education and awareness are certainly factors. Engineers, planners, policymakers, politicians and funders need to be cognisant of advances in green and hybrid project design, and engineering codes need to be approved to support them.

Even when these issues are reduced, risk tolerance is likely to remain a barrier, from a variety of perspectives. It is riskier to design complex systems because we have less evidence-based knowledge of what exactly can be achieved with particular interventions over time. It is riskier for politicians to approve innovations that could fail. It is also riskier for institutions to fund them, in part because the distributed nature of the systems could make maintenance harder to plan, especially in situations with low civil capacity. In short, these are all different ways of saying change is hard.

There are plenty of studies looking at what it takes for organisations to innovate. At the most basic level, change requires an interruption of habitual process at an early stage – if it is too late, it is much less likely to have an impact. If hybrid projects are to become the norm, this path interruption needs to occur long before projects get to the stage of acquiring permits and cost estimation. Co-benefits need to be put on the same footing as other factors when project goals are first being conceived  and initial designs are being sketched on napkins.

There are eight factors that should be included in any evaluation of preliminary project designs:

These need to be present in requests for proposals and quotations documents, in funding mechanisms and in publicity releases. Indeed, they need to become normal considerations for infrastructure projects – small and large. If consultants know that projects will be evaluated across all these areas, they will design projects that achieve the range of benefits that are possible. They will present designs that are more complex and which achieve co-benefits as the baseline, rather than as a fluffy alternative.

As a result, constituencies will build projects that achieve wider sets of benefits now rather than in a distant climate future, and politicians will come on board.
With as much as $90 trillion and millions of lives at stake, infrastructure’s climate and co-benefit potential cannot go untapped.