Half a degree, half a chance

The latest IPCC report outlined the devastating impact of a 2ºC temperature rise – the Paris target that we’re set to miss spectacularly – against the somewhat less bad scenario of 1.5ºC. We are now in damage limitation mode, and the window for doing even that is closing fast 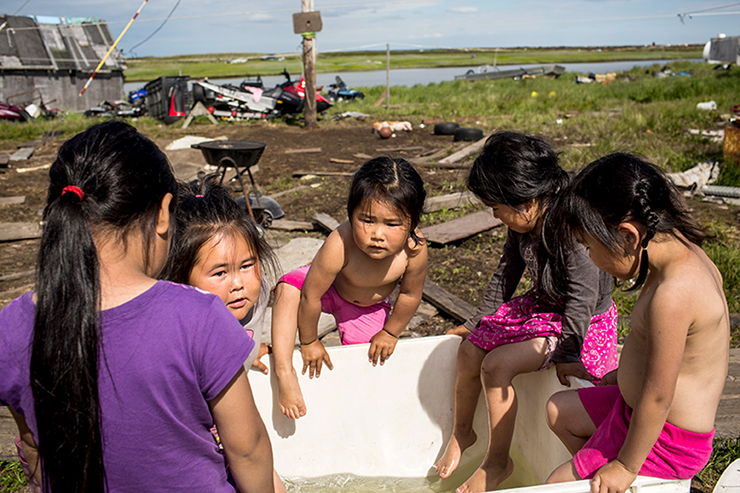 Children of the Yupik tribe in Newtok, Alaska. Rising temperatures are melting the permafrost, widening the rivers and eroding the coastline. The tribe has made a disaster declaration to the US government, requesting assistance in relocating  © Andrew Burton/Getty Images

Half a degree, half a chance

The latest IPCC report outlined the devastating impact of a 2ºC temperature rise – the Paris target that we’re set to miss spectacularly – against the somewhat less bad scenario of 1.5ºC. We are now in damage limitation mode, and the window for doing even that is closing fast

2018 may well be remembered as the year we missed the opportunity to prevent the worst impacts of climate change. In October, the Intergovernmental Panel on Climate Change (IPCC) released a special report on the differences between a world that is 1.5ºC warmer than pre-industrial levels, and one where temperatures are 2ºC higher. It is a grim read.

That crucial half a degree would add 10cm to global sea level rise, putting 10 million more people at risk. It would wipe out virtually all coral reefs. Three times as many insects, and twice as many plants and mammals, would lose over half their living space. Nearly 120 million more people would experience water scarcity. Two times as many people would be exposed to extreme heat. The average drought would last twice as long.

Even the dense and cautious language (projections are given a confidence level and a likelihood rating, where “likely” is classified as having a 66 per cent to 100 per cent chance of occurring) is unable to soften the fact that we are now in damage limitation mode. In 2015, global warming reached 1ºC and our options going forward all entail significant upheaval and loss of life.

The 1.5ºC scenario may be better, but it does not avoid sea-level rise, habitat loss and longer droughts. It would still see coral reefs decline by 70-90 per cent and millions of people struggling to cope with multiple challenges such as crop failures and extreme weather.

Current projections put us on course to reach this point in the next 10 years or so. It is this context that makes the report so distressing. Given that the 1.5ºC scenario, included in the Paris Agreement as an “ambition” at the insistence of small island states and a few others, is so disruptive, the 2ºC target that world leaders agreed seems woefully inadequate.

More worryingly, we are nowhere near meeting even that goal. If all commitments made under Paris were realised, global temperatures would rise by 2.6-3.2ºC. Our present trajectory puts us on track for a 3.1-3.7ºC rise – and we know what a deadly difference half a degree can make.

Turning point?
But there is still a chance that 2018 will come to be seen as the year the world changed course. The IPCC’s report sets out pathways for how we can limit global warming to 1.5ºC with no or minimal overshoot of this target. It features different combinations of lowering energy demand and consumption and moving to low-carbon goods and services, as well as strategies for removing carbon dioxide – recognising that whatever we do now, we will need to take CO2 out of the air in addition to reducing emissions.

One of the best-case scenarios is based on us achieving rapid decarbonisation, with afforestation being used to balance remaining emissions by removing CO2.

A middle-of-the-road scenario projects societal and technological developments following historical patterns, which would require more intensive changes in the way energy and products are produced, to compensate for a less steep reduction in demand.

The least-promising scenario, which would see a higher overshoot of the temperature target, sees us continuing energy-intensive growth, and therefore being heavily reliant on carbon removal technologies – most of which are still untested, especially at scale.

The message is clear: somehow, we need to halve net emissions in the next 15 years or so and virtually eliminate them by 2050. In parallel, we need to improve low-carbon technologies and carbon removal strategies dramatically. As IPCC member Jim Skea notes: “Limiting warming to 1.5ºC is possible within the laws of chemistry and physics but doing so would require unprecedented changes.” This publication features strategies and case studies for how we can meet this challenge through rapid, far-reaching transformations in areas from food to fuel, from cities to coastal communities. It is hardly an easy to-do list. Indeed, our contributors make clear that our approach cannot be linear and compartmentalised: number one, save humanity; number two, deal with human rights, conflict, etc.

Our success on the first goal is predicated on progress towards the second. We have to stop using fossil fuels, for example, but we can’t get there without ensuring that those whose livelihoods depend on it, and those who have no other option, are able to survive.

That does not mean we have to wait for the perfect solutions to move forward. In 2015, UNA-UK cast aside its reservations about the Paris Agreement on the basis that it represented a much-needed, long-overdue starting point from which to ratchet up ambition. But we cannot afford to put off the difficult decisions involved with fundamentally changing our societies.

For this reason, we have chosen to put special emphasis on finance in this publication, and give top billing to UN Secretary-General António Guterres, who succinctly sets out the fundamental economic shifts we need to start instituting now, and to László Szombatfalvy, the billionaire investor and philanthropist, whose risk-based framing of climate change will resonate both with business and the public at large.

Every day counts
Given the enormous risks involved, it is astounding that climate change does not dominate the headlines, or play a central role in elections and investment decisions. Astounding too is the prevailing wisdom that we must not be too gloomy in our messaging for fear of putting people off.

Of course, we should highlight the practical actions and policy changes that people can take and support. But it is difficult to think of another issue where we so easily underplay the grave dangers we face. If someone tells you that your house is burning, does that make you less likely to try to put out the fire?

In any case, we are now entering a period where those in the West, and elites in the South, are beginning to see what the poor and vulnerable have known for decades – that climate change is here. The past months have seen a heatwave contribute to an estimated 250 deaths in just one night in the UK. The US has been repeatedly battered by hurricanes, and forest fires in countries such as Greece have hit the tourism industry, affecting rich and poor alike. We have also seen an increase in warnings about the impacts of climate change on beer, for instance, which appear to have reached an audience far beyond the usual suspects.

Whatever the reasons, UNA-UK hopes this will be the year we all finally woke up to climate change. Every day matters now. We need to act fast.