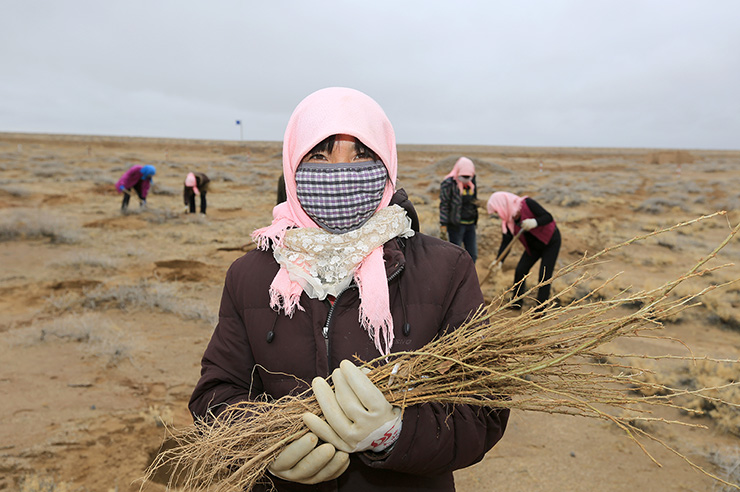 Planting sacsaoul in Minqin County, in northwest China’s Gansu Province. Minqin County, bounded on three sides by deserts, is a conspicuous success story in the fight against desertification  © Jie Zhao/Corbis via Getty Images

For decades, scientists and residents have been trying to tame the advancing sands of the Gobi Desert. Desertification – a major ecological problem that adversely affects 400 million people in China – is claiming thousands of hectares of land each year. To date, more than a quarter of the land area in China (about 2.61 million square km) has been degraded due to desertification. This poses an economic challenge to people in the affected areas and is forcing many to leave their homes.

As well as impacting agricultural production, desertification also affects transportation and communication systems. The economic costs of desertification between 2002 and 2006 have been estimated at RMB 64.2 billion – or about $8 billion – per year.

Of course, China is not the only country that suffers from desertification, land degradation and drought. These hazards, though climate-related, are largely caused by human activities such as overgrazing, inappropriate land use, over-cultivation of vulnerable areas, deforestation, wasteful use of water and population growth. Around the world, approximately 12 million hectares of productive land are lost each year. According to the UNCCD, 169 countries declare themselves affected. The most vulnerable regions are the drylands – semi-arid and dry sub-humid areas that cover about 41 per cent of the global land surface and host one third of the world’s population.

China has emerged as a champion in the fight against desertification. It has invested heavily in land restoration efforts since the 1960s through several major initiatives. The Three-North Shelterbelt programme is a national tree-planting project designed to halt the spread of the desert and to rehabilitate the degraded ecological system. Also known as the ‘Green Great Wall of China’, so far more than 66 billion trees have been planted. The programme aims to rehabilitate degraded land and stop the desert encroaching into the fertile grasslands and farmlands of northern China.

The project has already successfully restored 45 million hectares of land affected by soil erosion and afforested another 29.2 million hectares of degraded land, according to the National Forestry and Grassland Administration. The programme will continue until 2050, by which point the belt of trees will be 4,500 km long.

To scale up measures against desertification, the Chinese government has also developed a National Action Programme to Combat Desertification by expanding protected areas and restoring overgrazed and marginal farmlands to their natural state. It has created strong incentives to encourage private-sector organisations to invest in restoring degraded areas through public–private partnerships. Farmers and herders can get subsidies if they carry out land restoration work.

In 2016, China launched the Belt and Road Joint Action Initiative to combat desertification across the Silk Road region. Cooperation with partner countries and communities will accelerate in the future.

The Minqin Initiative is one of many success stories that illustrate how China has managed to significantly lower the threat of desertification after decades of restoration efforts. Surrounded by two large deserts – the Tengger and Badain Jaran, both part of the larger Gobi – Minqin County in Gansu province is a major source of dust storms that put millions of people in China and neighbouring countries at risk.

After overcoming some initial challenges, Minqin communities have successfully restored 153,240 hectares of forest. More than 300 km of the 408-km desert boundary are now fortified with trees. Forest coverage of Minqin reached 17.91 per cent in 2016, compared to 11.52 per cent in 2010, according to the state’s desertification control assessment.

Minqin’s battle against the spread of the Gobi Desert can be dated back to the 1950s. A Minqin resident, Mr Guirong He, has described the devastation caused by desertification and dust storms in the past. “We lost 38,000 hectares of land that was used to cultivate millet, maize and other vegetables,” he recalls. “Ninety per cent of young seedlings that we planted were swept away by sands and died. Fifteen thousand trees were uprooted, destroying about 1,000 hectares of reforested area.”

After such devastation, the success of the Minqin Initiative is bringing new hope. During the recent Belt and Road International Forum on Public Cooperation for Ecological Remediation, Haixuan Tao, the Head of Administration of Liangucheng Nature Reserve of Minqin County, said: “Life back then was like living at the edge of danger, and that is why the locals called this place ‘Hu Kou’ – literally translated as ‘Mouth of Tiger’. At one time, it was threatened by the biggest dust storm, which almost buried the village, and many families were forced to leave their homes.

“This year, on 21 May, we had another strong wind in Minqin. The wind speed was recorded as grade 8. But there was little sandstorm to be seen in Minqin compared to earlier years.”

The success of Minqin is not limited to afforestation activities. What amazed experts is the revival of Qingtu Lake, along with neighbouring wetlands and small streams. The lake, which was previously drying out at an alarming speed, has now stabilised. Water levels are increasing. This has prevented the Tengger and Badain Jaran deserts from merging. In addition, the planting of local herbal shrubs Haloxylon and Cistanche as part of the restoration project has created direct and indirect job opportunities for 114,000 people.

Other initiatives
Other success stories include innovative public–private models of cooperation. These include the restoration of nearly 40,000 hectares of degraded grassland in the Alashan Plateau led by the China Green Foundation, local communities and government. The Inner Mongolian local governments have partnered with Elion Resources Group to restore 600,000 hectares of degraded land in the Kubuqi Desert. And the Ant Forest app, introduced by Ant Financial Services (a subsidiary of the Alibaba Group), has encouraged urban residents to reduce their carbon footprint and help restore land that is degrading. Low-carbon activities by the app’s users, such as walking or taking public transport, are measured and converted into virtual ‘green energy’. This grows virtual trees in the user’s account, which are then converted into real trees that are planted in the desert.

These are clearly big successes, but the fight against desertification must continue – in China and beyond. With a growing population and a warmer and drier climate, the challenges will increase. We must ask what we can learn from China’s experience, and seek to balance the needs of socio-economic development with the protection of vital and limited natural resources.

With thanks to Xiaoxia Jia (UNCCD) and Jiajia Luo (China Green Foundation) for providing information on the Minqin Initiative and the Alashan Plateau restoration.