The impact on life on Earth

How is climate change disrupting our planet’s ecosystems and human societies? 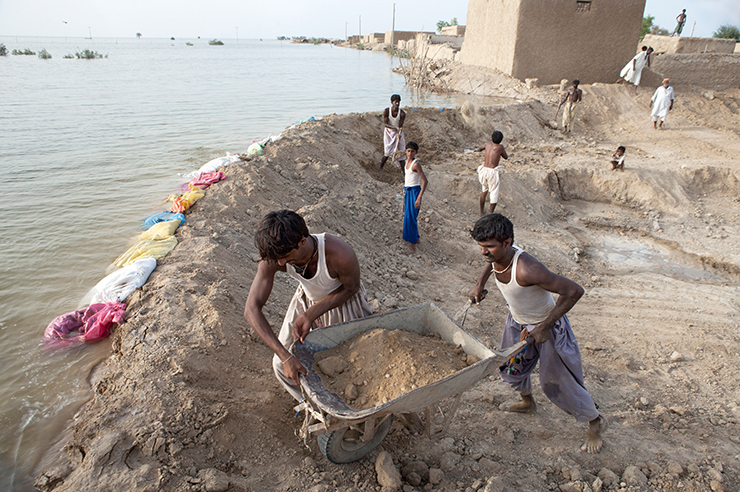 Building an earth barrier to protect Jhanghara village, Pakistan, from floods that affected 20 million people across the country in 2010, destroying some 1.8 million homes © Gideon Mendel For Action Aid/In Pictures/Corbis via Getty Images

The impact on life on Earth

How is climate change disrupting our planet’s ecosystems and human societies?

The world’s climate is changing. The mean surface temperature of the globe has already warmed, on average, by about 1°C when compared to the estimated pre-industrial average. Examples of climate change range from shifts in weather patterns and climate characteristics (such as patterns of rainfall or snowfall) to the increasing intensity of droughts, heatwaves and storms – on top of the rise in mean temperature.

In several parts of the world, particularly over land masses and in polar regions, the degree of warming exceeds the global average. Warming is especially strong in the Arctic and is also developing in the Antarctic. Melting glaciers and polar ice sheets are causing sea levels to rise.

Given the present observations and rates of change, and comparisons to similarly warm palaeo periods, it is becoming increasingly likely that the global average sea level will rise beyond that previously projected for 2100.

Climate change is causing increasingly severe and pervasive impacts. These have become evident in human societies and ecosystems on all continents, as well as in all oceans. A prominent example is the progressive demise of warm water coral reefs due to repeated exposure to temperatures which are too high, combined with other human-induced stressors. Ecosystem impacts are largely characterised by the displacement of organisms through exposure to temperatures outside of their thermal range.

As a consequence, the distributions of organisms in both aquatic and terrestrial realms follow the shifts in their preferred temperatures – mostly from lower to higher latitudes, leading to the mixing of ecosystems and a projected loss in biodiversity.

In parallel, some areas previously  available for growing certain crops will become unsuitable in the future. Depending on the degree of global warming that will occur, crop productivity – as well as fisheries, aquaculture productivity and food security for humankind overall – is projected to decline.

Such pressures exist for all organisms: not only for animals, plants and their ecosystems, but also for humans and their societies, despite humans’ wider scope for behavioural and technical adaptability. Temperature extremes – such as the increasing frequency of heatwaves – are threatening plants and animals (including humans). They are already having an impact on various regions and causing an increase  in mortality.

Like all organisms, humans have limits to the temperatures they can tolerate and function in. Limits are lowest at high humidity, which hampers the temperature regulation of the human body. Particularly at low latitudes, humid heat makes some places increasingly unpleasant, if not uninhabitable. Here, humans increasingly rely on technical solutions such as air conditioning to provide comfort zones where they can live and work, albeit by becoming isolated from the outdoors. The capacity for outdoor work in hot and humid climates, therefore, becomes increasingly constrained.

Human life and livelihoods, as well as the ecosystems on which they depend, are also vulnerable to other environmental extremes such as drought or floods.

Among humans, the very young and elderly are the most vulnerable, while poverty increases the direct exposure of humans to environmental extremes and risks. Nonetheless, extremes such as heatwaves are causing an increase in human mortality in both developed and developing countries. What’s more, climate change also creates human exposure to redistributed disease vectors and associated illnesses in formerly unaffected areas.

Evolutionary crises
Carbon dioxide (CO2), as a key driver of climate change, accumulates in both the oceans and the atmosphere. In the oceans, it undergoes a chemical reaction that acidifies the water. Ocean acidification is progressing in parallel to rising atmospheric CO2 concentrations.

The acidification dissolves calcium carbonate shells and structures built by sensitive marine calcifiers such as bivalves, echinoderms or corals, and hampers their ability to repair or build new ones. The accumulating CO2 penetrates the organism’s body and can result in disturbances of life-sustaining processes, and can elicit behavioural changes in animals.

There are other effects, too. Rising CO2 levels can lead to more vigorous growth in plant life in the oceans (as well as on land). Warming can cause oceans to become stratified, preventing the mixing of water between upper and lower layers, and can stimulate the oxygen demand of organisms. At low latitudes both processes can combine to create an expansion of isolated water bodies at intermediate depths that are naturally characterised by low oxygen levels. The result is that these waters can increasingly lose animal life.

These findings illustrate that life on Earth – especially complex, ‘higher’ life forms such as plants and animals (including humans and their societies) – relies on ambient temperatures being maintained at low-enough atmospheric CO2 levels. Further, the evolution of life, especially of higher life forms, could only occur because microbial life on our planet has generated and is supporting high-enough oxygen levels in the atmosphere and water.

The fact that our planet has provided the ‘right’ temperatures and high-enough oxygen levels has, in fact, enabled the evolution of complex animals and plants. Conversely, temperature extremes, oxygen losses and high CO2 levels have contributed to evolutionary crises during Earth’s history and have shaped the direction of evolutionary changes.

Major implications
Over the last 10,000 years or so of stable climate conditions, human civilisation has progressed to make humans – the most successful mammalian species – capable of sustaining high population densities on most continents. At the same time, the building of human infrastructure has predominantly occurred in coastal and low-lying areas, leading to the prevalence of megacities (cities of more than 10 million people) in coastal regions, which are now challenged by progressive sea-level rises.

Human history also shows us how climate-related events – such as droughts, crop failure and pest infestation – can lead to population displacement and conflict. As climate-induced human migration has been projected (and may already have started), the low availability of uncolonised territory and associated resources may increase conflict and make human civilisation more vulnerable to climatic changes and associated economic losses.

The oceans have an important role in maintaining temperatures within a tolerable range on land. Oceans absorb more than 90 per cent of the heat accumulated by the planet and minimise temperature shifts and variability. For example, the Gulf Stream – a crucial driver of the gigantic conveyor belt of global ocean currents – may be seen as part of this climate conditioning system and as a thermostat for the North Atlantic and Europe predominantly. Temperatures are maintained in a pleasant range: temperature extremes are alleviated.

The Gulf Stream has not only shaped climatic zones in Europe and neighbouring seas, but also the associated communities of plants and animals that are specialised for these zones. This includes the marine ecosystems of the Atlantic as well as their fisheries’ productivity. On land, mild temperatures and the balanced distribution of precipitation support green landscapes and high yields in agriculture. The Gulf Stream circulation has also shaped the history and cultural evolution of humankind in Africa and Europe.

While the Gulf Stream appears as a given, it is responsive to small changes in environmental conditions – for example, the changing heat budget of the oceans under conditions of climatic change. The apparent instability and projected weakening of the Gulf Stream given climate change is a concern: the Gulf Stream is a crucial driver of global ocean circulation, supports the health of sustainable ecosystems, and human wellbeing. The loss of the stable climate that our planet has enjoyed for the last 10,000 years will have major implications for all life on Earth.

Many insights provided by the natural sciences have shaped human civilisation and technologies. In similar ways, climate change and its impacts have become part of our reality everywhere. A puzzling development is that some high-level policymakers appear to believe that they can choose to ignore unequivocal scientific evidence about climate change. While ignoring reality is not without precedent in human history, the available evidence tells us that the global climate system is changing and that the planet is warming. What’s more, the evidence shows that it is humankind causing these changes and the associated impacts, through emissions of CO2 and other greenhouse gases to the atmosphere.

We can say with very high certainty that the various measurements, observations and projections provide a factual and realistic picture of both the present and the future. Denying climate change is thus equivalent to ignoring reality. As much as voters cannot vote on climate change, policymakers cannot make the reality of climate change subject to their approval. They also cannot choose to ignore the fact that human livelihoods and ecosystems are being harmed, or that human lives are being lost due to climate change.

We need collective action, even if some might consider such action to be precautionary.

The sixth assessment cycle of the IPCC will assess our growing knowledge base further. But what is already very clear is that only by keeping climate change within narrow limits – such as those agreed in Paris in 2015 – will we be able to build a better and more prosperous and sustainable future for humankind and the world’s ecosystems, as outlined in the UN Sustainable Development Goals.