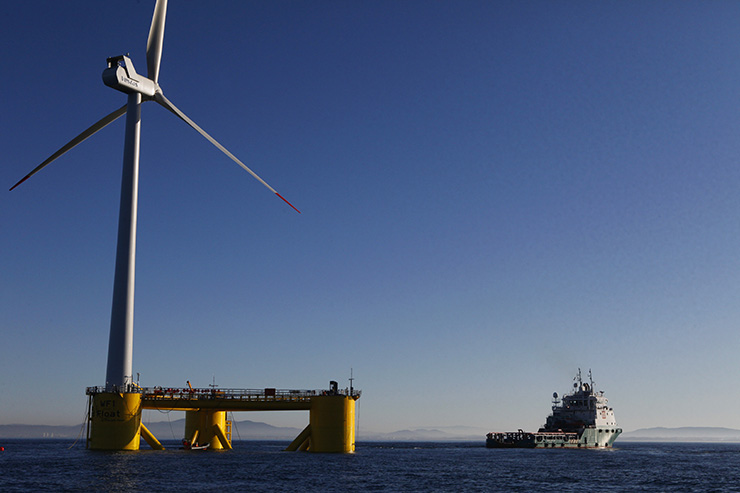 WindFloat Atlantic, featuring the world’s largest offshore wind turbine on a floating platform, off the Portuguese coast of Viana do Castelo. Repsol, part of the consortium behind the project, is a fossil-fuel energy company that has responded constructively to investor pressure to eliminate GHG emissions. © JN Lanthiez/Bourbon

It is clear why investors should be deeply concerned about climate change. The direct impacts are being seen in agriculture and food supply, infrastructure, flooding and water supply. Furthermore, the actions being taken by governments in response have major implications for investors. As an illustration, the structure of the mining, energy and transport sectors will change dramatically as governments encourage reductions in fossil-fuel use and incentivise renewable energy, energy efficiency and energy saving.

In fact, one of the most striking features of climate policy discussions over the past year or two has been that investors have started to take much more of a leadership role. Investors were one of the key voices at COP25. They played a central role in the European Commission’s High-Level Expert Group (HLEG) on Sustainable Finance in 2018 and in the subsequent discussions around the policies and regulations needed to implement the HLEG’s recommendations.

Growing influence
There are four reasons why we think investors will play an even more influential role in the coming years.

First, the urgent need to act is clear. Insurance company Munich Re has estimated that hurricanes, wildfires and floods will have cost the world $150 billion in 2019. The devastating forest fires in Australia confirm that, as a society, we need to be prepared for and able to respond to more extreme weather events.

We are very likely – as suggested in the UN-supported Principles for Responsible Investment’s (PRI’s) analysis of what it calls the Inevitable Policy Response – to see strong, economically significant and disruptive climate-related policies in the coming years. To take just one example, thermal coal is likely to be rapidly phased out in many countries.

Second, investors have now developed a scalable, replicable model of collective action that can drive ambitious change in company practice and performance, most notably through initiatives such as Climate Action 100+ (CA100+). As a consequence of investor engagement, high-impact companies such as Repsol and Maersk have committed to net-zero carbon targets by 2050.

Others such as Shell have agreed a joint position with investors to establish an engagement framework that supports the transition of its business to substantially reduce its carbon intensity. In addition, again as a result of investor engagement, Repsol, Shell and other companies have started to challenge the lobbying by industry associations against measures to curb carbon emissions.

Third, we have evidence that it is economically feasible for companies to be aligned with the goals of keeping global temperature rise within 2°C (or even 1.5°C) above pre-industrial levels.

The TPI’s research on 57 of the world’s largest transport companies indicates that approximately one fifth (19 per cent) of these companies are already on course for a 2°C future. TPI’s analysis of the global electricity sector provides a similar finding, showing that 31 of the 109 assessed companies (or 28 per cent of them) are in line with a pathway to stay below 2°C. Many of these companies are in Europe, where public policy has provided the necessary support for them to align with a 2°C scenario.

These companies prove that it can be done. But there is a long way to go. TPI’s recent review of the energy sector found that 22 per cent of the companies analysed did not even have a policy on climate action or recognise climate change as a relevant risk.

Fourth, investors are making strong commitments to action. At the UN Climate Summit in September 2019, the PRI and United Nations Environment Programme Finance Initiative launched the UN-convened Net-Zero Asset Owner Alliance. The Alliance, which currently represents nearly $4 trillion in assets under management, is capturing commitments by asset owners to align portfolios with a 1.5°C scenario.

In parallel, the Institutional Investors Group on Climate Change’s Paris Aligned Investment Initiative is developing a practical and useable framework for investors to understand what it would mean for a pension fund to align with the goals of the Paris Agreement. The initiative is jointly chaired by APG of the Netherlands and the Church of England Pensions Board, and is supported by over 60 major institutional investors with over €13 trillion in assets under management.

The likely consequence of these two initiatives is that more asset owners will make similar commitments. This will reinforce the engagement asks being made by CA100+ and drive demand for tools, metrics and indices that enable investors to assess and report on their performance.

Despite these positive changes, we are acutely aware that we need to do more. The most immediate challenge is that we must move away from looking at companies and sectors in silos. We know that supply and demand of energy, products and services are effectively two sides of the same coin.

Take the case of aviation. Reducing emissions from the sector is not just about making planes more efficient or buying carbon offsets. These actions are important, but only as part of a much wider agenda for change. If we are to reduce emissions from the sector, we need major airlines, energy providers, engine and plane manufacturers, and experts in transport systems and infrastructure (among others) to identify the pathway and the technological and regulatory challenges that need navigating.

We also need the financial incentives that could be brought into play to accelerate achieving the goal. Investors must be part of these discussions – whether that is as shareholders or bondholders applying pressure for action, or as experts in the development of incentives and instruments (for example, low-carbon transition bonds) that can drive and accelerate the changes needed. As part of these efforts, we need to empower and enable regulators to act. Without effective policies and incentives, progress is unlikely to be as quick, sustained or ambitious as it needs to be.

In 2020 we – in a project led by the Church of England Pensions Board, Swedish pension fund AP7 and BNP Paribas Asset Management – will be developing a new standard on positive climate lobbying. This will bring together leading companies already addressing lobbying misalignment in their industry associations with progressive investors. It will set a new standard that works across the value chain to support net-zero-carbon pathways.

Ultimately, responding to climate change requires a new form of partnership. It requires investors, companies, regulators, civil society and other actors to work together to develop and then deliver the systemic, economy-wide changes needed for us to successfully transition to a low-carbon economy and to adapt effectively to the physical impacts of climate change.