The Paris Agreement saw more than 90 countries reference plans to establish a carbon market or pricing mechanism. Are these schemes doing enough, and what can be done to make them more effective? 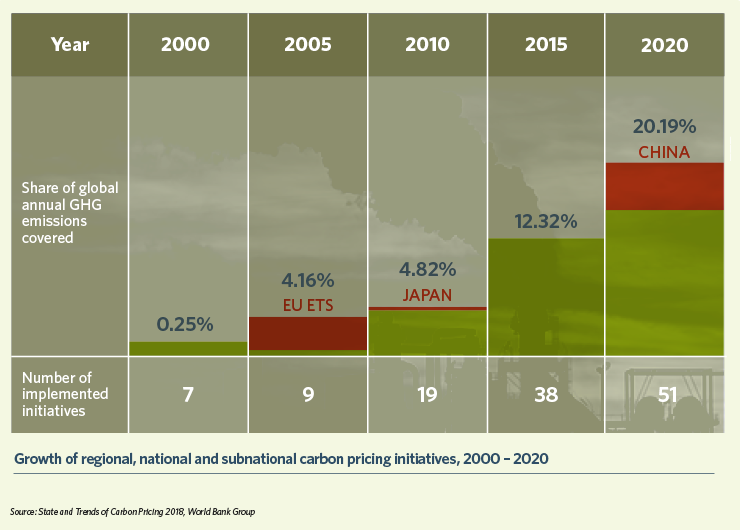 The Paris Agreement saw more than 90 countries reference plans to establish a carbon market or pricing mechanism. Are these schemes doing enough, and what can be done to make them more effective?

Most people will not pick up hitchhikers, fearing strangers and disliking freeloaders. But the world economy has not been so cautious. Since the Industrial Revolution, global economic activities have been picking up dangerous freeloading strangers in the form of greenhouse gas emissions (GHGs). These are the hidden hitchhikers that are normal byproducts of fossil-fuel combustion. But while GHGs ride along with economic activity for ‘free’, the costs to the global environment, public health, food and social security climb inestimably higher.

What is the remedy? A first step to covering these indirect costs is to charge the freeloaders, known as carbon pricing. Nations have tried two major approaches (at least) since 1997 and the Kyoto Protocol. The first is outright carbon taxes levied directly on emitters on a per tonne basis, just like a sales tax is added to a dinner bill. The theory is that taxes will deter emissions. But taxes require massive political commitment and public support. Once set, they are politically hard to raise.

Second, there is cap and trade, which sets up market-based competition among emitters. The theory here is that commercial incentives work more effectively than taxes at stimulating innovation to cut GHGs. Cap and trade requires emitters to go on a ‘carbon diet’ or annual reduction regime. As with taxes, the cap – the official maximum of allowed emissions – is established by government, and is gradually tightened, allowing fewer and fewer emissions. Emitters receive a set of start-up allowances, either free or via an auction, much like the first deal in a card game. But each year the number of allowances issued is reduced, tightening supply and ratcheting down allowable emissions. All emitters must stay below the cap, and so must constantly scour their operations to achieve more reductions.

Cap and trade works on the supply-and-demand principle: the tighter the supply of allowances, the higher the price. Some emitters may be more energy efficient, and so may have surplus allowances to sell. They may achieve their reduction goals more cost effectively than emitters with older equipment or other technical constraints.

No emitter reduction costs are ever the same: a seller’s costs may be $15 per tonne, while a buyer may face $25 per tonne. So they bargain, and sellers make money selling their surplus at any price lower than the buyer’s costs. Buyers save the difference between actual cost and purchase price. The premise of cap and trade is that as the overall cap is tightened, the price of buying an allowance will climb. When it rises higher than the cost of reducing emissions, emissions reductions will be incentivised. Pricing these allowances means ‘pricing carbon’.

In the end, between the buyers and sellers, the same number of tonnes are reduced. In theory, cap and trade prioritises the least-cost reductions. It gives all emitters time to implement the latest technologies while reducing overall emissions.

Critics of cap and trade worry that the system lets some emitters off the hook. But as the atmosphere does not care who makes reductions or how, does it matter from a scientific point of view where the obligations fall?

Critics also point out that the system can be gamed if too many allowances are issued, (called ‘hot air’). This causes excess supply in the system and means prices remain low. This occurred in the first phases of the EU Emissions Trading System, when prices for allowances collapsed. However, with the 2018 redesign of the system, prices quadrupled from €5 per tonne in May 2017 to over €20 in September 2018. Obviously, no system is perfect or immune to fraud and misrepresentation.

Interestingly, China appears to be opting for a market-based system. In 2015, after establishing various pilot carbon markets around the country, China announced plans for a national system, the rules of which are currently being finalised. In the United States, as national climate change policy disintegrates under the Trump Administration, California and states in the north-east have taken the lead and established state-based cap and trade systems, currently perking along and being refined.

All such pricing systems have a common objective: to illuminate the cost of emissions and to gradually make it more costly to emit than to reduce emissions – not only of carbon dioxide, but also all other major GHGs such as methane and nitrous oxides. Price signals illuminate possible eventual cost savings from reducing emissions.

As pricing GHGs becomes integral to global economics, it will gradually emerge as fundamental to evaluating corporate near-term performance and strategic management. It will be an important indicator for investors of how well prepared a company may be to face inevitable climate change liabilities.

Facing the inevitable
Recognising this, and despite fragmented public policy, many major companies have come to regard carbon pricing in some form as inevitable. They have begun using an ‘internal carbon price’ to practise, in effect, the impact of mandatory carbon pricing in business operations. According to the global non-profit and data platform CDP, which began tracking internal carbon pricing in 2013, the number of companies taking this approach jumped from 150 in 2014 to over 1,300 in 2017, including in China, Japan and South Korea. And prices vary greatly, ranging from $4 to $100.

Companies settle on a price based on internal operational costs and price signals from existing markets or tax regimes. Without mandatory structures, companies may still express their internal carbon prices in local currencies for internal planning purposes.

But as regulatory regimes emerge worldwide, ultimately those prices will be expressed in international currencies and become fungible, critical to a functioning global carbon market.

As to what carbon price is fair, there is no yardstick. The indirect costs of weather disruption, floods and other catastrophes are only getting more expensive. Individual weather calamities cost billions of dollars and it is estimated that meeting the needs for climate resilience in modernised and updated infrastructure will cost trillions.

A carbon price per tonne is but one element needed to make formerly invisible costs visible so that emitters, and the economy overall, recognise and pay the true costs of emissions. At some stage, though, all costs are passed along to consumers, and consumer tolerance for higher prices for energy and goods remains highly variable.

So, as the world heads into preparations for the post-Paris five-year stocktake in 2020, there is no easy answer on carbon pricing. But, without doubt, invisible hitchhikers can no longer ride for free.