Knowing what to do 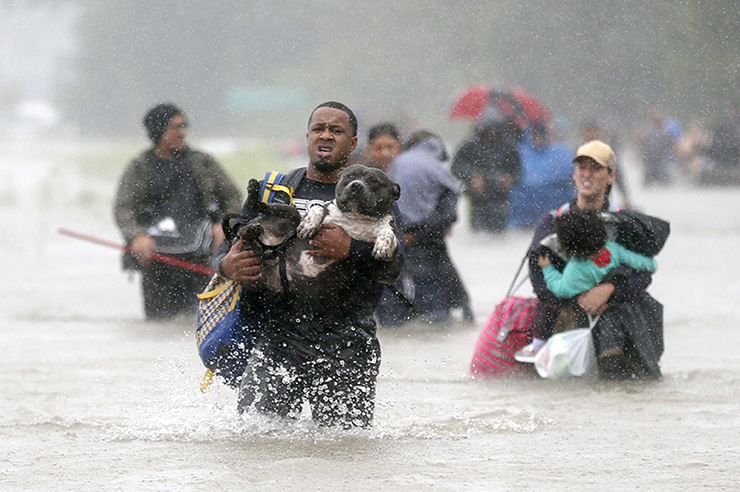 Residents of Houston, USA, seek safety from the floods caused by Tropical Storm Harvey. Often data on risk exists but either goes unanalysed or unheeded. In most countries, insurance companies have a better knowledge of flood risk than government.  © Jonathan Bachman/Reuters

Knowing what to do

Professor Stephen Hawking marked his 75th birthday with a stark warning on climate change, saying that he fears “evolution has inbuilt greed and aggression to the human genome”. Tackling climate change requires two things: a political decision to take action, and the information to know what actions to take. Both require new forms of cooperation. If selfishness is the greatest threat to our planet and people, then cooperation is its saviour.

The Global Partnership for Sustainable Development Data (GPSDD) exists to foster the cooperation to drive better information. We live in a world that produces more data than ever before. But this does not mean that it is available – at the right time and in the right format – to solve the critical challenges of our time. Focusing on data might seem a diversion, a distraction from the real business of policy and politics. But data is part of the critical infrastructure for policymaking, without which change is less likely.

Data coordination leaves nowhere to hide
A common understanding of the facts is the basis for political coalition and popular support, which are prerequisites for action. This is painfully evident in the area of climate change – where the basic facts, uncontested by an overwhelming majority of the world’s experts, are still being challenged by an ideological few.

Despite an overwhelming amount of evidence from scientists and researchers around the world agreeing on the role of humans in increasing the effects of climate change, this topic still remains highly political. Better data alone cannot overcome ideological divisions. But a better understanding of the data and the story it is telling the world will help to build the political momentum for change.

It will also reduce the hiding places for those who would deny what is happening to our planet. Data is also essential for defining priorities for action.

Governments have to know what industries and activities are the major sources of emissions in their countries to decide how to design the right combination of regulations, tax and subsidy policies to reduce them. They have to know how climate change is affecting rainfall and soil quality in different parts of the country to decide how to support those who are already feeling the effects. And they have to know if the policies they implement are working, or if a change of course is needed.

Too many governments lack too much of the essential information, and too many of the skills to analyse that information, that is the basis for good policy-making. Climate change and extreme weather events do not respect manmade borders, so a unified response remains vital. The contribution of carbon into the atmosphere varies dramatically from developed to developing countries, where the impact  will affect the poor and marginalised first.

To better account for these variations, as well as the effects, impact and responsiveness of potential solutions, we need data to inform action and decision-making. Also essential are broad education and outreach programmes to engage citizens on what they can do to help mitigate against climate change.

Until information is improved, we will be fighting climate change with blindfolds on.

There is unprecedented information about the world – will we use it?
The world of data has been transformed over the last two decades. It used to be mainly public bodies and a few academic institutions that were chiefly responsible for the collection, curation and use of data. Every department of every government around the world is still collecting and using data. In many cases, they are doing this more than ever before, as the ambitions of governments to provide universal services and to reach their far-flung populations have grown over time. Now, they have been joined by many others.

Thanks to dramatic technological changes with which we are all familiar, vast quantities of data are created and held by institutions of all types and sizes.

Companies hold millions of data points created by the phones we all carry in our pockets every day and by the hundreds of satellites that fly over us, photographing the world as they go. Grassroots organisations in every corner of the world hold unique records of how people live and how they are responding to the challenges of climate change. Yet this highly useful information is not readily available to the people tasked with fighting climate change. Imagine being a policy-maker of a nation seeking to address climate change and knowing that the owners of the most popular phone network know more about your fellow citizens than you do.

Satellites that are positioned over your country are capturing minute-by-minute information on deforestation, shifting seasons, urbanisation – but you do not have access to that info. Insurance companies operating in your country have better flood maps than your ministry. Unlocking this information for the public good would facilitate huge leaps in countries’ capacities for resilience-planning and climate responses.

The data system needs coordination and efficiency
The GPSDD is a growing network of over 250 organisations around the world working to harness the data revolution for sustainable development and climate action. Our member organisations include governments, companies, civil-society groups, international organisations, academic institutions, foundations, statistics agencies and other data communities. To succeed in the fight against climate change, government agencies need to be working together through a multi-stakeholder approach inclusive of civil society and the private sector.

The GPSDD is currently working with a number of governments – including Colombia, the Philippines, Ghana, Sierra Leone, Kenya, Senegal, Tanzania and  the US – on ‘data roadmaps’ that adopt  this inclusive approach. Countries can broker partnerships to access data that is relevant to climate and resilience planning – such as earth observation data, including satellite data on weather and sensors on soil and plants.

However, having a clear understanding of the data ecosystem – in terms of what data exists where, who is doing what, and key roles and responsibilities on data production and use – is often lacking, or fragmented  at best. Aligning frameworks that have a data-reporting requirement – whether this be international, national development priorities, or existing data programmes such as open data, spatial data infrastructure, e-governance or official statistics – offers an approach for better coordination and efficiency, as well as reducing redundancy.

In return, a better understanding of the data ecosystem can be gained, including understanding where the gaps exist. Once this data ecosystem is better understood, the distinct roles and responsibilities across government  agencies, and how civil society and  private sector can better engage, become clearer. This understanding will also help  to identify what actions are needed to fill these gaps and how to partner with regional and international organisations that can support political, technical, capacity and financial challenges.

For example, in Ghana, a Sustainable Development Goals (SDGs) Implementation Coordination Committee has been established to develop a multi-stakeholder approach to putting the SDGs into practice. This includes key government institutions, civil society and the private sector. In Sierra Leone, the same approach is being applied but through a pre-existing body, the Open Data Council.

In each case, a data ecosystem mapping effort is being undertaken to better understand what data exists and where. More specifically, it will reveal gaps, which can then be prioritised for investment and partnerships.

Opening data sets can help countries meet the Paris Agreement
The Paris Agreement aims to strengthen the global response to the threat of climate change. It seeks to keep global temperature rise this century to under 2°C above pre-industrial levels and to limit temperature increases even further where possible.

Coupled with the SDGs, launched in 2015, and the intended nationally determined contributions under the UN Framework Convention on Climate Change, there are plenty of instruments in place to support how governments, civil-society organisations and the private sector can reduce their impact on climate change.

However, climate data is often incomplete, fragmented across agencies,  or not made openly accessible or available  in interoperable formats. These factors  limit how data can be applied, and therefore how policy and decision-making can be better informed.

The Paris Agreement depends on international cooperation and mutual trust, in that member countries will prioritise global needs over national self-interest. It also requires countries to monitor, report and verify climate actions, most significantly around greenhouse gas emissions. Transparency is inherent in the Paris Agreement. This guiding principle of transparency is designed to make data publicly available – allowing any organisation to examine the data, analyse it and advocate for change as necessary. As a result, the absence of comprehensive open climate data will make it difficult for countries to meet their commitments under the Paris Agreement.

Governments likely either do not understand the demand for climate data, or may not be able to make the data openly accessible due to weak mandates or incentives, political issues or lack of capacity.

On the demand side, other organisations, private-sector bodies and citizens – who may want to hold their governments accountable or use the data  to further innovate and determine more local actions – likely do not know where the data exists and how it can be accessed, if at all.

Given current political trends and the increased rate at which climate change is occurring, it has never been more important to make climate data more available in useful formats. This would allow a range of actors across sectors to better understand climate trends, and develop solutions and policies that work.

FROM ECO-WARRIORS TO DATA ECOSYSTEM WARRIORS

Of the two elements needed to fight climate change – political action and information (to know what actions to take) – the former understandably dominates the headlines. The Trump administration’s formal notification to the United Nations of its intention to pull out of the Paris Agreement has been a galvanising moment for many. Yet the threat of climate fatigue persists, even as the stories about bushfires and bleached coral pile up.

Readers of these stories can contribute to political action by lobbying, protesting and advocating for climate action. They can also call for a climate movement underpinned by the best and most recent information available on our planet and its people.

Admittedly, one’s first thought upon reading about the melting permafrost may not be: “How can I contribute to a better climate data ecosystem?” But addressing climate data gaps will maximise the impact of work to combat climate change.