Is the US ready to spearhead action on the bold changes necessary to avoid a potentially catastrophic rise in global temperatures? 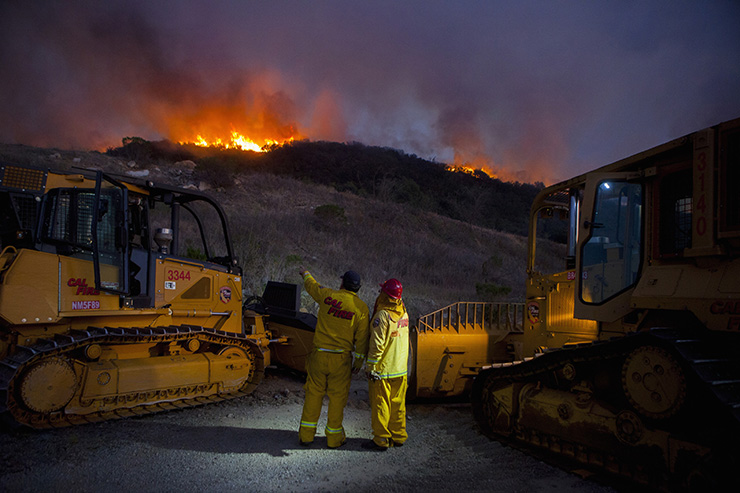 Is the US ready to spearhead action on the bold changes necessary to avoid a potentially catastrophic rise in global temperatures?

As the world heads toward a global agreement to tackle climate change this year, the United States needs to be at the forefront. The US – which is the world’s biggest historic greenhouse gas (GHG) emitter, and the second-biggest current one after China – has begun the shift from laggard to leader in curbing the GHG emissions that are warming our planet. The consequences of this warming are evident across the US map: severe droughts, extreme weather and rising seas. Most American citizens, and the leaders of many cities, states and regions, recognise that now is the time to act. So does President Barack Obama.

There is legitimate reason to be hopeful that with US leadership, an international agreement can be struck in Paris this December. A global deal would help launch the long-term efforts we need to keep the world from exceeding the 2°C temperature rise that the vast majority of climate scientists agree would dramatically increase vulnerability to climate-fuelled disruption.

Real opportunity
A visible first step toward this goal is the US-proposed climate commitment – its Intended Nationally Determined Contribution (INDC) in UN parlance – released on 31 March 2015. In it, the US administration said it will reduce its GHG emissions to between 26 and 28 per cent below 2005 levels by 2025, a goal that is challenging but achievable. Meanwhile, as part of a US-China announcement last November in Beijing, China has committed to limiting its carbon dioxide emissions so that they peak by 2030 or perhaps even earlier. The historic joint climate announcement by these two economic powerhouses offers essential momentum for other nations to build on.

The climate challenge is filled with real opportunity. With job creation and economic growth in prospect for nations that lead on low-carbon technologies, putting a price on carbon could make the US more competitive with China and other countries that dominate the booming clean-energy market. As the world’s top investor in renewable energy, China is creating 100,000 clean-energy jobs each year. By 2020, the International Energy Agency predicts China will account for 40 per cent of world growth in renewable energy capacity. It makes sense for the US to increase its share of this business.

In fact, five US sectors are primed to capture additional economic benefits while combating climate change, according to the World Resources Institute (WRI) 2014 report, Seeing Is Believing. These are: power generation, electricity consumption, passenger vehicles, natural gas systems and hydrofluorocarbons (or HFCs, the potent heat-trapping gases commonly used as refrigerants). Together, these five account for more than half of total US GHG emissions. Curbing emissions from these sectors, therefore, is critical for the US to achieve its national climate goals.

Laying the groundwork
The US Climate Action Plan, released by the Obama administration in 2013, laid some of the groundwork for a more aggressive stance on climate. Rather than pushing for legislation in a politically polarised Congress, the President’s plan aims at change through federal regulations and state-level action. WRI’s paper, Can the US Get There from Here?, demonstrates that by using power plant standards and energy efficiency while reducing methane emissions and moving away from HFCs, the climate targets set out by the US can be met.

As the federal government clicks into gear on climate action, it joins leaders of cities, states and regions who are already responding to the challenge. In nine Northeast and mid-Atlantic states, participants in the Regional Greenhouse Gas Initiative have reduced power sector carbon dioxide pollution by 40 per cent since 2005 while the regional economy grew by eight per cent, adjusted for inflation. Customers collectively saved nearly $400 million on energy bills.

Western and Midwestern states are working together on climate and clean-energy strategies through the North America 2050 Initiative. California and Quebec are partners in a cap-and-trade emissions-cutting programme, which Ontario recently announced it plans to join. A new executive order issued by Governor Jerry Brown mandates cutting California’s GHG emissions to 40 per cent below 1990 levels by 2030, an interim target meant to help the state lower emissions to 80 per cent below 1990 levels by mid-century.

All US states will be required to comply with new national power plant standards, which are expected to become final in June. WRI’s analysis shows that for many, it won’t be a heavy burden and greater efficiency and innovation could enhance economic opportunity.

Based on existing infrastructure, many states can cut emissions by relying more on natural gas, installing more combined heat and power at large facilities, like universities and hospitals, and making on-site efficiency improvements at coal plants. Some 29 states already have renewable energy standards and about 25 have energy efficiency standards. And because supply and demand-side efficiency saves energy, these measures can be cost-effective and could lower electricity bills in the long run. Many states found that using more renewable energy brought consumer prices down.

Portland: a success story
As former mayor of the environmentally focused city of Portland, Oregon, I have seen up close how climate action and economic development can and must go hand in hand. Five years ago, Portland integrated its climate action strategy with a push to develop the economy and create jobs in a plan called We Build Green Cities.

Focusing on clean technology and professional services companies, Portland encouraged environmentally sustainable construction and eco-district planning to make neighbourhoods walkable, bike-able and connected by transit and bike corridors to cut down on the need for cars, as well as deeply self-sufficient in terms of energy. We created 900 bioswales – landscape features designed to remove silt and pollutants from surface run-off – to make the city greener and keep rainwater from flooding our streets.

The city’s carbon emissions dropped 11 per cent between 1990 and 2013, while population and the economy grew. Global companies – including wind turbine maker Vestas, renewable energy firm Iberdrola and networking company Alcatel-Lucent – were drawn to this revitalised metropolitan area.

One key to our success was linking climate action and sustainability from the start. These efforts can’t be an afterthought for cities, states and countries that want economic as well as environmental benefits. Most mayors don’t have the luxury of wallowing in partisan politics. They have to provide services that people demand in a cost-effective way. Often the clean, low-carbon option has the greatest value over the traditional approaches.

Getting the world on track
What’s true for Portland is becoming true of other cities around the globe – and these successes can also be achieved at the state, national and global level. The Compact of Mayors, launched at the UN Climate Summit last September, is the world’s largest coalition of city leaders addressing climate change. Its signatories pledge to reduce their GHG emissions, track their progress and prepare for the impacts of changing climate. While over the past 20 years, US federal interest in climate has waxed and waned, cities have helped lead the way with innovative approaches and cost-effective policies.

Climate action in US cities is in line with polling that shows the vast majority of Americans favour government action to combat climate change and deal with its worst impacts. That includes nearly half of all Republicans who responded, reflecting a growing potential that the partisan divide on climate can be overcome.

Even as those with vested interests in the high-carbon status quo continue to block action and spread misinformation, climate science has only gotten clearer, and the scientific consensus has only gotten deeper. There is also mounting evidence that climate action and economic growth can go together, as demonstrated by New Climate Economy’s Better Growth, Better Climate report.

The American public and many US city leaders have made their needs known: they want the United States to lead, working with the international community to address the effects of a changing climate. In a recent New York Times/Stanford University poll, US voters said they would support a US commitment to an international agreement to reduce global emissions.

As we head to the next big opportunity in December, the US can draw on its recent experience to play a leading role. Its commitment to reduce emissions by 26 to 28 per cent is significant, but it shouldn’t stop there. The United States has the opportunity to accelerate efforts to decarbonise its economy over time and in doing so, help the world get on track to tackle climate change.

But it can’t be done by just one big country – or two or 10. All countries need to come together to recognise the benefits of robust climate action for people, communities and the economy. By seizing these opportunities, the world is poised to tackle this global challenge.