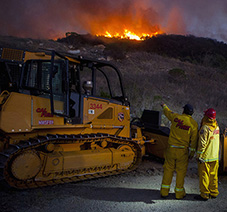 Firefighters battle a blaze in San Marcos, California May 14, 2014. More than 20 structures, including several homes, burned to the ground and thousands of people were ordered to evacuate on Wednesday, as a wind-lashed wildfire roared out of control in the heart of a Southern California coastal community. The so-called Poinsettia Fire, which erupted shortly before 11 a.m. in Carlsbad, some 25 miles north of San Diego, quickly became the most pressing battle for crews fighting flames across the region amid soaring temperatures and hot Santa Ana winds. REUTERS/Sam Hodgson (UNITED STATES – Tags: ENVIRONMENT DISASTER TPX IMAGES OF THE DAY) – RTR3P82V