More governments see emissions trading as a powerful tool to help meet climate targets without choking economic growth. However, for this nascent market to succeed, it must become truly international and cooperative 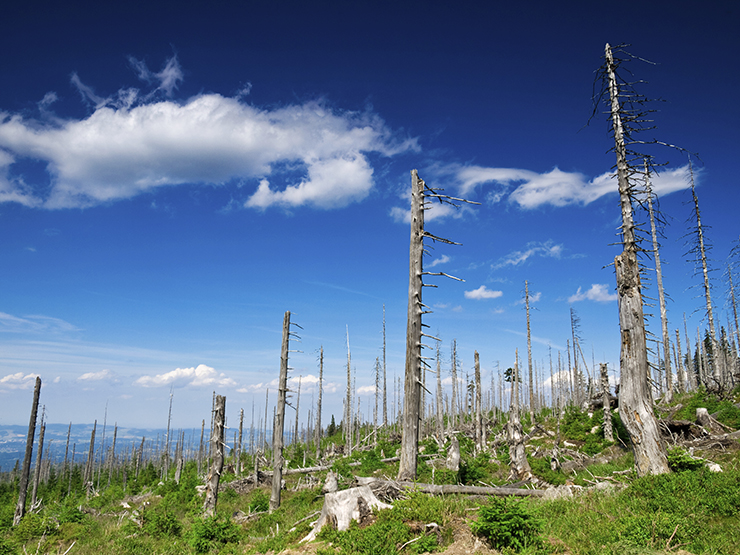 Trees killled by acid rain in Poland. Emissions trading is a recent but not new innovation: it proved immensely effective and efficient in tackling acid  rain in the US in 1990s.  © iStock

More governments see emissions trading as a powerful tool to help meet climate targets without choking economic growth. However, for this nascent market to succeed, it must become truly international and cooperative

Look around the world’s capitals. For the first time, every nation in the world is preparing a contribution to the climate change fight. The word ‘contribution’ should not be seen as a gift to charity. Rather, it’s a commitment to cooperate in a global movement to reduce emissions on a massive scale. The international community’s stated goal is to hold global warming to no more than 2°C. Sounds simple, but it implies that developed countries will reduce emissions by 2050 by as much as 80 per cent, and developing countries by up to 50 per cent. This will be a heroic effort, but everyone knows it will happen in stages. And it will happen from the ground up, from hundreds of actions taken at national and subnational levels.

As pledges are made in the early part of this year, they will set the stage for a major event in Paris in December, when a new climate agreement will emerge to govern international efforts for the coming decades. It will improve not only the climate, but also direct investment flows for a major transformation in how we create and use energy – all aimed at that 2°C objective.

A market-based approach
A key economic fundamental underlies this work. Numerous studies have shown that if countries act collaboratively, brought together by a system of market-based measures, then they can afford to do much more – and do it faster – than if they go it alone. They just need a system to instil economic value in carbon reductions. Simply put, they need a price on carbon.

Catching carbon reductions is like fishing with a net: the broader you cast the net, the better the results. The Paris agreement needs to help nations connect their carbon markets across borders, so that better results can be achieved. We need a market that casts a global net on this problem.

From an environmental point of view, market mechanisms offer the best hope of achieving the 2°C goal without stunting economic growth. In fact, market approaches tap into economic growth cycles and allow efficient flows of capital to places that offer the ‘biggest bang for the buck’ in reducing emissions at any given time. Markets can reward entrepreneurs who seek out and capture the best options.

That’s why more than 1,000 businesses and 74 governments signed the World Bank-led Joint Statement on Carbon Pricing last year. It’s why the role of markets is a key element of the Paris negotiations. And it’s why countries like South Korea, China, Kazakhstan and New Zealand, not to mention many US states and Canadian provinces, are joining Europe in using market-based solutions to drive businesses to reduce emissions.

The roots of emissions trading
Emissions trading is a recent innovation in environmental policy. The most famous early example emerged in the 1990s with President George H. W. Bush’s acid rain programme, to spur sulphur dioxide reductions. It was hailed for its effectiveness in meeting emissions targets ahead of schedule and for only 25 per cent of the predicted cost – something rarely seen in environmental governance.

Rather than require every source of emissions to reach a specified limit, the programme allowed the entire group of sources to reach the target together. Cheap sources could do more than their share and take reductions to market. Expensive sites could buy the extra reductions, which were cheaper than controls on their own plants. A private market emerged to support trades between power stations.

This strategy works where the pollution problem being addressed is the overall loading of emissions into the atmosphere. In other words, it doesn’t matter where the individual emissions reductions take place; all that matters is the cumulative result.

Such is the case with climate change. The atmosphere values an emissions reduction from any location on the planet equally. So a cooperative approach that enables companies to harvest emissions from the cheapest places can offer powerful results.

The key to understanding its market success is that it offers a fair deal to buyer and seller – be they a company or a country. Both are better off, because the atmospheric benefit helps everyone. More specifically, the expensive sites save money and the cheap sites make money.

The emergence of carbon markets
For the past 10 years, the EU has run the largest emissions trading programme in the world for delivering greenhouse gas reductions: the EU Emissions Trading System (ETS). The EU ETS has met every environmental target for the past decade. However, in recent years, the market has sent a weak investment signal, because the carbon price declined sharply during the economic crisis – adjusting to the drop in economic output and, therefore, emissions.

Perhaps the EU ETS’s greatest success is how it attracted participation from dozens of carbon-offset providers through the UN’s Clean Development Mechanism (CDM), which helps attract low-carbon investment in developing countries. This experience helped spark South Korea’s interest in launching an ETS this year.

It also prompted China’s interest in using a national carbon market to reduce emissions, due to start in 2016. Many other emerging economies are setting up their own pricing systems, including Mexico, South Africa and Chile. A global movement is underway.

Challenges and opportunities
Carbon markets have endured their fair share of growing pains. Under the Kyoto Protocol framework, the US, Canada and Australia opted out, but Europe, Japan and many developing countries did not. Europe’s appetite for CDM credits launched a global industry in climate mitigation projects.

The most important challenge came with the economic crisis. It reduced demand for carbon units in Europe, just like it reduced demand for fuels and other commodities. But the system survives and produces daily prices – and prompts emissions cuts in line with Europe’s commitments.

American states are looking at market-based alternatives to a proposed federal regulation on power-plant emissions, including emissions trading. But it would be better if the US Congress passed a new law to address US carbon emissions, as current regulations are grounded in an old statute that is ill equipped for handling such a major issue.

China has seven pilot trading markets in operation, and the country is currently in the design phase of a national carbon market. It is expected to ramp up between 2016 and 2020 and be ready to help China meet its post-2020 goals.

Among the greatest remaining challenges is how to assure that companies don’t try to escape carbon controls by moving to places with little or no regulation – that’s why the Paris agreement needs to set broad coverage across every major economy. Market architecture can help with this problem by providing incentives for countries to set similarly stringent targets, since comparability of targets is likely to be the first requirement for any market linkage.

Creating a global market
With the major players turning to market solutions, the Paris agreement will need to contain provisions to support linkages between the markets in the future. Since  the agreement may be quite short, it will likely establish the most basic rules to provide a foundation for international market cooperation.

The International Emissions Trading Association (IETA) worked with the Harvard Project on Climate Agreements last year on a project to highlight what core provisions are needed in Paris in light of the growth of national and subnational carbon markets. These include the tools to ‘account’ for emissions and a registry system to trade carbon units. Making these available on an open-source basis could make it easy for interested nations to build strong systems.

The negotiating text for Paris is slowly taking shape. It contains provisions to address major themes such as mitigation, adaptation, finance and technology transfer. It offers options for building a market framework, including the ideas that IETA and Harvard floated last year.

Realistically, a Paris agreement will stop short of offering the operational decisions needed to supply some of the market infrastructure. But it offers a major opportunity to put political winds in the sails of future efforts.

So far this decade, the broad economic shockwaves across Europe and the political divisions on climate policy in the US have presented major challenges to international climate policy. But the coming decade is gearing up for something important. Look around you – when you see Europe, China and America searching for ways to tap market solutions to climate change, you know it’s something the world has never seen before. It will be a first.

How cap-and-trade works
In a cap-and-trade system, a central regulator (usually government) sets an aggregate cap for all covered emitters (such as power plants, heavy industry and chemicals firms). From that aggregate cap, emissions allowances are distributed, either through public auctions or direct grants for industries exposed to international competition.

When the compliance deadline for each period occurs, companies must surrender an amount of allowances or offsets to equal their actual emissions. If they miss a target, they face stiff financial penalties.

This means that throughout the year, companies are making reductions – or if their production grows, they procure credits. They gradually build their account balances to have enough allowances for compliance by the due date. If they have extra, they can bank them for future use.